Jeremy Gutierrez is raising his young family around an addictive passion: his beautiful 1986 Thunderbird. 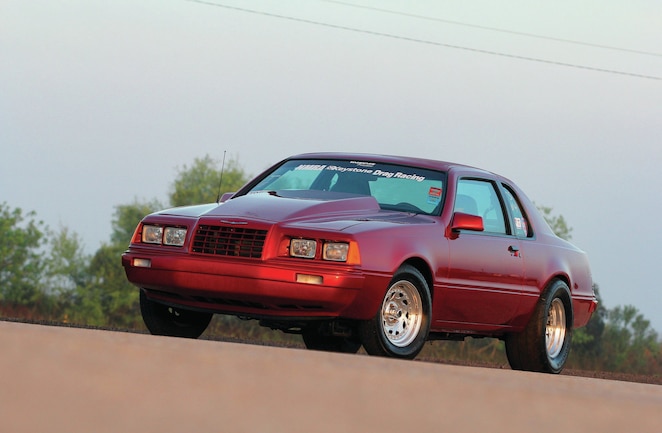 Jeremy Gutierrez of Port Saint Lucie, Florida, had been looking for a car he could afford when his father drove past a 1986 Ford Thunderbird for sale in February 1998.

He returned home to pick Jeremy up to look at the car and it was decided—the T-bird would be purchased as a gift for his son's 18th birthday. Mind you, the car was far from perfect and would require a bit of TLC for superficial issues, but it was a solid Fox for a teenager.

"I drove it for a few months before the modifications started," Jeremy explained. "It started when I blew a head gasket. From there I removed the fuel injection, added carb and intake with a full 2 1/2-inch exhaust and drove it like that for a little while before I had to change the gears. So I went to the junkyard and picked up a 1988 Cougar 8.8 rear and 3.73 gears." Jeremy spent a lot of free time in junkyards those first few years, pulling transmissions and body panels from unlucky discarded Thunderbirds.

"The car has had about four or five stock transmissions out of junkyard cars," he said. "I would just keep replacing them because they were cheap." Unfortunately, the T-bird would soon be involved in an accident resulting in the front right corner needing repair.

Jeremy worked on the bodywork himself, piecing the car back together, and it was when the car was more than a few different colors that he met his now-wife, Carly. "I took her on our first date in this car," he said. "It was beat up and junky, but she fell in love with the power and the sound. I did donuts with it in an industrial lot and she loved it."

After taking out a loan to finally build the car right, Jeremy was able to purchase a new engine and transmission. He called up Engine Rebuilders Warehouse and ordered an Eagle Stroker Kit and contacted Lake Park Auto Machine Incorporated of Lake Park, Florida, to do the machine work on the block.

Under the hood sits a '88 Ford 302 bored 0.030 over with a 3.40-inch stroker crank, bringing it to 347 ci with a 10.5:1 compression ratio. A Trick Flow TFS roller camshaft and AFR 185cc aluminum cylinder heads work with a Victor Jr. intake manifold, which has been port-matched by AFR. A 650-cfm Holley carburetor custom-tuned by Quick Fuel sits atop the powerplant. Jeremy also installed an MSD Digital 6-Plus ignition box and MSD Blaster 2 coil, as well as an MSD Pro-Billet distributor.

Hooker competition 1 3/4-inch coated long-tube headers and an X-pipe flow to Magnaflow mufflers producing a rich growl. The T-bird is currently equipped with an '89 Ford AOD transmission paired with a B&M Hammer shifter and TransGo shift kit, but Jeremy tells us that he has a Tremec TR-3550 five-speed waiting for eventual installation.

UPR Tubular A-arms and K-member reside up front with Strange coilovers and 175-pound springs from Eibach all around. UPR solid-mount double-adjustable control arms reside in the rear and connect the 8.8 to the body. Rear gears are now 4.30:1. Lastly, Competition Engineering weld-in subframe connectors keep the chassis stiff. 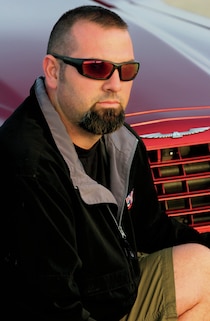 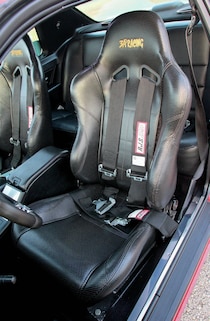 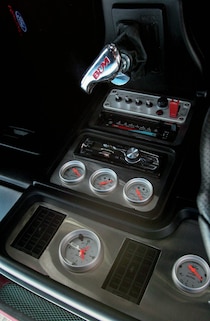 Center Line Warrior wheels pull the Thunderbird's stunning looks together. They are wrapped in Mickey Thompsons (295/55/15) out back where power meets pavement. Jeremy finished up the bodywork in his garage, adding a 3-inch cowl hood and shaving the emblems. The overhaul included a color change from Canyon Red to Toreador Red, and the red interior was removed to make way for the sleek black office. RJS 5-point harnesses were added proving beneficial during Jeremy's 11.48-second at 119.27mph quarter-mile passes.

The T-bird had ceased to operate as a daily driver in 2007 when it was pulled from the road to finish the project and is now a weekend warrior handling occasional racing duties. Fast-forward to 2014, Jeremy brags that he was lucky enough to bring each of his three daughters home from the hospital in his T-bird.

"I had their names embroidered in the backseat. Right now, I only have my oldest two: Andrea and Brianna. My youngest wasn't born yet, but I'll have her name, Carly, embroidered soon."

His wife sometimes drives the T-bird to work, and his daughters love helping him work on it in the garage on the weekends and going for rides around town. "They call it the hot rod, and they're always telling me to go faster. I think they love the way it kicks them back in the seat."

Sitting between the visor and the headliner are several pictures drawn by his girls on Father's Days and birthdays reminding him of one very important truth. "It's not just about me—they're a huge part of this. If my family didn't love the car, I couldn't have spent so much time on this project."

Rescued from a salvage yard, this 1988 Ford Thunderbird Sport is far from original.