Hellion’s twin-turbo Raptor is the specimen that SVT should have built. 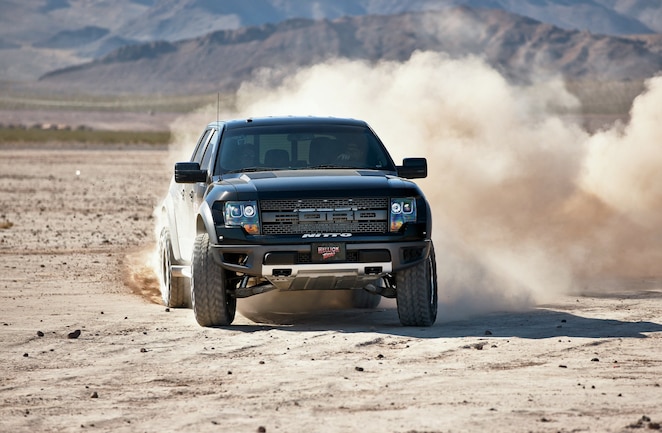 The sun had just crested the Las Vegas skyline on its ascent. As I walked through the casino and exited through the rotating door, the crisp early November air hit my face and tingled my lungs.

Valets fetched sedans, cabs flowed through like a stream, honking their horns, and people from all different walks of life entered and exited the Las Vegas Hotel, where I had been staying. I sipped on my coffee and sat on the bench awaiting my ride to a dry lakebed for a photo shoot in the desert, located an hour or so away from Sin City.

Over the previous five days, the SEMA show had consumed my days and the Las Vegas nightlife my nights. For those of us in the automotive industry, it's a chance to catch up with friends, eat ridiculous amounts of food, and see the latest developments in the industry first hand. My approaching chariot just so happened to be one of those developments. On display to represent Hellion Power Systems, a company you've seen on these pages many times, this vehicle featured twin-62mm Precision turbos, and I was to drive it out to the location of the photo shoot. It could have been a lawn tractor, and I would have slapped my grandmother in the face to get a chance to take the helm. Let's say I was excited.

And as I watched car after car enter and leave the loading and unloading zone, my anticipation grew. Then a formidable and sinister-looking pickup truck made the turn toward me and rolled slowly to a stop. The driver hopped out, leaving it running, and left the driver's door open for me to enter. There were a few Hellion Power Systems stickers on the doors and hood, so I knew the driver wasn't making a mistake, but I was taken aback. After a long pause, I jumped up, grabbed my belongings, and jumped up into the driver's seat.

This “pickup truck” was actually a 2011 SVT Raptor. Sure, it did have large 35-inch Nitto Trail Grapplers wrapped around a set of custom black wheels, but other than that, it looked like any other stock crew-cab Raptor you would see on the street. It was black without the graphics package—intimidating to say the least.

Still, I climbed into the driver's seat enthusiastic about this all-new adventure that I was embarking on. Though Mustangs have been my passion for many years, I'm familiar with trucks. I grew up in a rural area, and all of my buddies had four-wheel-drive trucks. And my first vehicle was a '73 Bronco. So behind the wheel of the Raptor felt like coming home. Though my Bronco didn't have all of the technology found on this state-of-the-art off-road contraption. Cruise control, satellite radio, navigation, adjustable pedals, heated and cooled seats—not a chance on my Bronco.

We know the Raptor can handle off-road situations better than almost any other production vehicle. With its Fox racing shocks, unique control arms, high-and-wide stance, and 6.2L engine, it's the king of production four-wheel-drives. So the unpaved portion of this drive was going to be fun, without a doubt, but the paved portion was the part that I was so unsure about.

I've had the pleasure of driving both 5.4L and 6.2L Raptors—they're not rocket ships. I mean, considering they weigh over 6,000 pounds, they're not slow by any means, but not fast. So as I made my way through the surface streets and toward the freeway, I did some light-to-light launches, just to see what this baby could do. As I accelerated from a dig, it hunkered down, dug in, and halfway through the intersection I could hear the turbines spooling up. Back in the seat I went, and all 550 rwhp and 586 lb-ft of torque could be felt in the seat of my pants.

The truck was a test mule for Hellion, and was used to develop its Raptor twin-turbo kit. At only 7 pounds of boost, it's a mild hit of boost, but very effective and quick to react. Besides the aforementioned Precision 62mm turbos, the kit features 100-percent stainless steel construction, Turbosmart 40mm wastegates and VEE bypass valves, stainless four-into-one headers, a large vertical flow dual-inlet intercooler, and 3-inch downpipes (which can be connected to the stock exhaust system if desired).

After feeling the power that it could produce, I began to wonder if drivability was at all sacrificed. It wasn't. At part throttle, cruise, or decal, the Hellion Raptor behaved like a stock piece. No rattles, no bucking, no surging, and no stalling—it was a dream to drive. And once we arrived to the dry lake bed? Well, just look at the pictures on these pages. We had a blast, and the Hellion Raptor didn't disappoint—on- or off-road.

Still, I climbed into the driver's seat enthusiastic about this all-new adventure that I was embarking on.