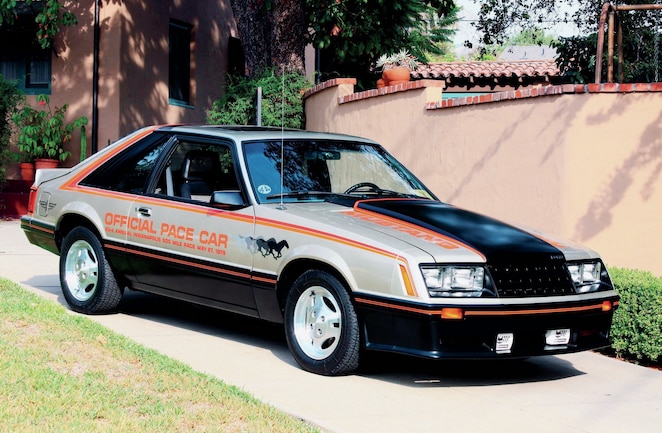 When Ford rolled out its redesigned '79 Mustang in the fall of 1978, traditionalists were awestruck because it didn't look like a Mustang. Gone were the pseudo side scoops, three-element taillights, mouthy Ferrari grille, and pony/corral motif. Few of us understood that Mustang was entering a new phase in its then 15-year evolution. Ford wanted to break away from what the Mustang had long been. Product planners and a savvy stylist named Jack Telnack believed it was time for a fresh-faced Mustang—a new breed. It was going to be a totally new Mustang built on a European-style platform known as Fox. The "Fox" name was based on what Ford envisioned for this new platform using the German Audi Fox as a benchmark.

The Fox platform was originally going to be a world car built on nearly every continent only it didn't shake out that way. Yet "Fox" became Ford's most common North American platform for a wide variety of nameplates, including Fairmont, Zephyr, Granada, Thunderbird, Cougar, Lincoln Mark VII and Continental, Capri, Mustang, LTD, and Marquis. Although Fairmont and Zephyr arrived before Mustang, the Fox platform was developed for Mustang and Capri first. It made perfect sense to spin more and more nameplates off of the Fox platform because it was so versatile. It would live in production until 2004 and end with the last SN-95 Fox-4 Mustang in May of that year.

Ford stylists in Dearborn came up with a sporty Mustang notchback sedan that resembled the Fairmont and Zephyr with a low greenhouse and the Mustang's short deck/long nose demeanor. Telnack, who had just returned to the United States after a stint with Ford in Europe, applied his own nuances to the Mustang, making it more sporty and aerodynamic. The Mustang redesign took on new life in so many ways because there had never been a Mustang like it before.

Although the '79 Mustang didn't look like a Mustang, it sold like a Mustang because buyers loved it and bought it in great numbers, despite radical changes in styling. They liked the car's fresh look and snapped up 369,936 of them. Of those total units, 10,478 of them were limited-edition '79 Indy pace car replicas. Sandy Blaser's Mustang was one of them with a 302ci (5.0L) V-8 and four-speed manual transmission. Just 2,402 of them were produced this way, along with 2,106 with automatics. The rest were 5,970 turbo four models with the rugged 2.3L inline-four. Most of them did not survive because their engines and carbureted turbo induction systems were problematic and expensive to fix. The 2.3L Turbo four was dropped in 1980 as a result.

The '79 Mustang was chosen to pace the Greatest Spectacle in Racing—the 63rd Annual Indianapolis 500 on May 27, 1979. Three Jack Roush–prepared '79 Mustangs were built to pace the race with one primary and two back-up vehicles. This would be the second time Ford Mustang was selected to pace the race, with the first time being in May of 1964 when Mustang replaced the Galaxie 500 at the eleventh hour.

Before you is a factory original 3,800-mile '79 Mustang Indy pace car replica survivor, "This Mustang pace car was originally delivered to Beglin Motor Sales in Beaver, Pennsylvania," Sandy tells us. "It was lovingly preserved and occasionally driven by its original owner until 2009." And this is what makes this story unique because very few of these cars survive today in original condition. This one has never had an underhood pad and the original factory hood scoop was replaced under warranty due to defects in the fiberglass, which happened to several of them. When enthusiasts spot this pristine factory original ride assembled at the Dearborn assembly plant, they can't help but study the car in great detail. Show judges love the car for its flawless detail, awarding it an MCA Gold every time it competes in a national show.

Sandy tells us the car has just two options—a rear window defroster and tinted glass. Standard are goodies like AM/FM cassette and cool Recaro seats head the list of no-cost extra features. "I purchased this pace car from the second owner despite there being 10,478 of them produced," Sandy reflects. "So few of them survive in original unrestored condition." When you take the wheel of a factory original Mustang ride like this, it's a reminder of the way things were 35 years ago. There's still the sweet aroma of original materials gassing off, better known as "new car smell." The checkered black and white pattern Recaro seats still fit the keister wonderfully the same way they did in a small Pennsylvania town a lifetime ago.

For what the 5.0L 2V V-8 lacks in power, it makes up for it in spirit when you're at the wheel shifting its four-speed SROD (Single-Rail Overdrive) .70 overdrive transmission. The SROD is actually a three-speed with overdrive Top Loader four-speed main case with the SROD tailshaft housing. Performance is certainly memorable because it takes us back to a time when Fox technology was fresh and nothing like anything we had ever driven before from a Ford assembly line.

To drive a new '79 Mustang was a grand entrance into a new era of handling and road feel thanks to McPherson strut front suspension followed by four-link coils in the rear. Metric 390mm TRX wheels with Michelin P190/65R390 radials were a first on the Mustang for 1979 and were in continuous production through 1984. They were not the greatest idea Ford has ever had, especially today where it is nearly impossible to find metric radials.

Ford saw the Mustang's 15th anniversary as an opportunity to show off raw power in an era when buyers were more focused on fuel economy and cleaner air. It enlisted Jack Roush Performance in nearby Livonia, Michigan, to build three hot '79 Mustang Indy pace cars for the 1979 Indianapolis 500 to demonstrate Ford still had its foot in it, despite high fuel prices and concern over the environment.

Most remarkable about the three pace cars is their suspension systems were left largely alone, proof of the successful engineering efforts that bore the Fox platform. Aside from revised shock valving and spring rates, underpinnings were stock. Aside from Fairmont police package semi-metallic brake pads, brakes were stone stock. Each had a C4 transmission with higher-stall converters along with the stock 3.08 axle ratio. For promotional consideration reasons, Goodyear Wingfoots were used instead of Michelins.

The Roush-prepared 302 engines were built from scratch using specially prepared stock 302 two-bolt main blocks, steel Boss 302 crankshafts and C3AE rods, specially machined forged pistons (cut 0.040 inch), a flat-tappet Boss 302 mechanical camshaft, early 351W cylinder heads with 1.84-/1.54-inch intake/exhaust valves, 289 High Performance valvetrain with guideplates, high-flow/a high-pressure oil pump, a 7-quart oil pan, a police package air cleaner, a Holley R-6989 600-cfm carburetor, a Ford/Cobra-style dual-plane intake manifold, and the stock 5.0L/2.3L Turbo exhaust system with catalytic converter removed. These were modifications any of us could have performed on our own 302 engines. And that was the message from Ford and from Roush as an attention getter in the lean late '70s.

When these cars were screwed together and flung about the track, their numbers were not all that dazzling. About 270 hp with 260 lb-ft of torque. Zero to 80 mph happened in about 12.8 seconds with a top speed of 127 mph; 0-to-60 happened in 7.7 seconds.

It can be easily said the 10,478 replicas Ford produced to celebrate Mustang's 15th year and selection as the official Indy 500 pace car may have been considered overkill considering these overwhelming numbers. However, it has given us a generous supply of restorable examples and rare survivors to remind us of a period of intense change and the birth of a new era of Mustang performers.