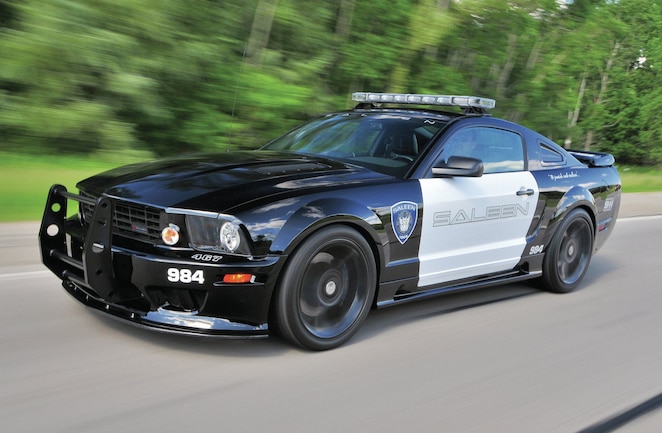 Mustangs were made for the big and small screen. The free spirit they represent and their overall youthful design makes it a natural for TV and movie producers to cast Mustangs as both bit parts and starring roles. We bet every Mustang fan's favorite part of I am Legend is the sound of that Bassani exhaust bouncing off city buildings at the very beginning. The epic chase scene from the movie Bullitt is forever etched in Mustang folklore. If you're old enough, we're sure you didn't mind Farrah Fawcett taking the spotlight off a '76 Cobra II while watching Charlie's Angels. Add to these both Gone in 60 Seconds, the Fast and Furious franchise, and Editor Houlahan's favorite, Death Race, and you have a full library of Mustang cinema history.

However, that's just a small representation of Mustangs hitting the big stage. We'd be remiss if we didn't recount this Mustang's cinematic starring role as a Decepticon in the Transformers movie. The car even had a name, "Barricade," but that was actually the transformer's name. Barricade would transform into a police car to easily move within the human race, and project authority. In real life when you see a police car we tend to give it space and let the officer do his/her thing. That was Barricade's role as a Mustang. As a Decepticon, Barricade had a 50mm chain gun and spinning spike wheels he used during close-combat altercations.

Obviously, this isn't actually Barricade. This Saleen S281E was built by Saleen as a promotional tool for Transformers. Built in 2007, the car was modeled after Barricade, and according to current owner Jeff Forsyth, this particular Saleen was the East Coast promotional car. Jeff tells us his Saleen is the only Barricade to feature a Saleen supercharger. He also says there were three Barricades built for the movie, and two promotional S281Es built. Since Jeff's is the East Coast car, we can only assume the other promotional car was for the West Coast. Guess you guys in the middle of the country didn't get a promotional S281E Barricade, and Jeff also tells us the West Coast car was disassembled by Saleen in 2008.

When Jeff saw the Transformers movie, and saw Barricade in Saleen form, he thought, "It'd be cool to own a car like that." While Jeff was attending a Ford show in Milford, Michigan, this car was in the Saleen display at the show. Jeff has a history with Saleen since he also owns an '06 Saleen S281, and he was talking to Saleen's Jeff Clark about Barricade. It was mentioned this car was actually for sale. Little did he know a year after seeing the car on-screen, he would own this very car.

Jeff primarily uses Barricade as a show car. "You get paranoid with people hanging all over it," Jeff says. Jeff often takes the car to the Woodward Dream Cruise, various car shows, and he's even taken Barricade to kids' birthday parties twice in 2014. "The kids are the first to recognize the car," Jeff says. It's not Farrah Fawcett, but Barricade still has an impact.