A marriage of love, speed, and matching vehicular transportation 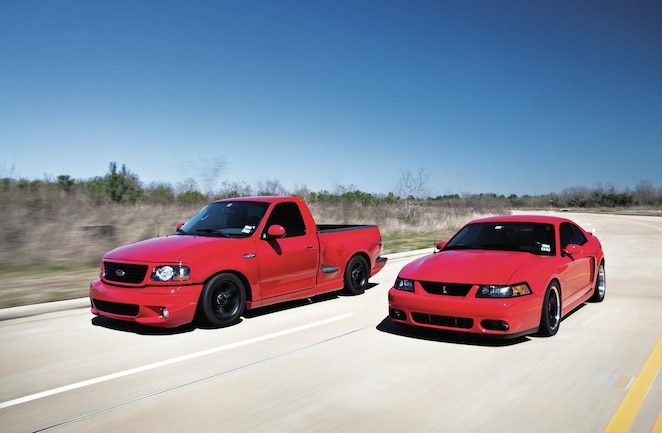 Just imagine how many more events you could hit, how much more money you could spend on projects, and how many more hours you could wrench if your significant other was a Gearhead just like yourself? For Guy Steiger, this is his reality.

"Because my wife, Kristie, is into cars just as much as I am, I get to attend far more events and spend a lot more time with cars," Guy says.

But before the naysayers question Kristie's true dedication to cars, let's just say it's deep. "I've always been a car girl. My father raced go-karts and Sprint Cars, so it was only natural that I liked cars, but I was more of a Brand-X person until I met Guy. My parents even bought me a '79 L82 Corvette after I made all As in school," Kristie explains. "In fact, many guys have always turned to me for advice when modding their cars. It's kind of funny," she adds.

Raised in a Bow Tie household or not, at the ripe age of 17 she met Guy and has bled blue ever since. "Guy was always into Mustangs. I never really thought much about them until I met him. He had a Fox-body, and we used to take that thing everywhere," Kristie adds.

He's actually had three Fox-bodies: a bone-stock '88 GT; a beat-up '87 GT; and his last Fox, a '92 LX hatch that received a built 306 with a shot of nitrous. That was his first taste of the modified Mustang world.

"My LX was really the car that got me into modified Mustangs. Like many people, I took it too far, to the point where it was unreliable and horrible on the street. That's when I started looking at the newer modular-powered cars, because of their technology, reliability, and easy horsepower upgrades," Guy says.

Like any true gearhead, Guy told his wife the Cobra was an anniversary present, but it was just as much a gift for him. "I told her the Cobra was for her, but it was my way of trying to convince her that we needed it," Guy says.

She didn't need much convincing after seeing the low-mileage '04 Torch Red Snake at a local dealer. It was a one-owner car, well cared for, and already tastefully modded. The Steigers would later discover that the Cobra was actually built on Kristie's birthday—was it fate? Call it what you want, it's killer. This Cobra is stupid clean, stupid fast, and daily driven.

"We got the car in 2008 and quickly lost interest in the Fox-body because it was so easy to make power with the Terminator," Kristie says.

It was out with the old Fox-body and in with the new—meaning a heap of parts for the Cobra. Although the Cobra already came with BBK long-tubes, a matching X-style mid-pipe, and a Magnaflow after-back, along with a pulley and a tune, the Steigers decided that wasn't enough. A 2.3L Whipple Gen-1 blower pullied for 23 psi joined the party, as did an Accufab single-blade throttle body, Steeda cold-air intake, and SCT BA2800 MAF with a Diablosport MAFia that put the Terminator around 600 hp at the wheels.

But gearheads are a greedy bunch, and when that wasn't enough, the Cobra received an LFP dual-pass heat exchanger and a fuel system upgrade for E85.

"We added a DivisonX 1,000hp return-style fuel system with its high-flow, low-profile rails and 80-lb/hr injectors so we could run E85," Guy explains. The last round of mods and plenty of corn-fed fuel allowed the tuner to crank the timing for 685 rwhp and a claimed 755 lb-ft at the wheels.

There might have been a slight dyno discrepancy with the torque reading, but there's no disputing the nearly 700 hp from such a simple mod list.

Although the Steigers still have more plans for their … err, we mean Kristie'sCobra, it's proof you don't need a mile-long mod list to create a killer Cobra—instead a well-executed one does the trick.

Speaking of executing, would you believe the Bright Red '04 Ford Lightning has over 80,000 miles on the odometer and still wears the original paint?

"We drive our cars a lot. The Cobra is driven daily, but we also pride ourselves on taking really good care of them," Guy explains.

Speaking of flawless, did you notice that both Fords are '04s, both are red with black wheels, and both are blown? How's that for a power couple?

"I became really active on WestsideMustangs.com, a Texas-based forum for Ford enthusiasts. It really peaked my interests in Lightnings," Guy says.

Peak it did, as Guy is now the co-owner and president of Westside Mustangs and owns his very own tastefully modified Lightning.

"I was very specific about the truck I wanted. It had to be red and an '04 to create a matching set with the Cobra. On Father's Day 2012, I found this one at a dealer," Guy says.

Unlike the Cobra, the Lightning was nearly stock, save for a pulley and a muffler, but it only stayed that way for a week.

And yet, that wasn't enough. The stock supercharger and throttle body received Stiegemeier Stage 5 porting, a Metco idler/tensioner pulley combo, and an oil separator.

Of course, who could miss the LFP Mega Tank intercooler reservoir with its clear lid, along with the matching LFP dual-pass heat exchanger? The result? A claimed 450 hp and 550 lb-ft at the tires–enough to lay waste to the tires at will.

Other noteworthy additions include a Hughes transmission pan with an upgraded valvebody, QA1 front and Strange rear shocks, and plenty of other suspension goodies from Belltech, Metco, and Mad Enterprises. Let's not forget the Depo headlights and taillights, and other small additions, like the emblem overlays, Plasti-dipped wheels, and Pioneer double-din head unit with the Lightning insignia as the screen saver.

So there you have it, two special-edition SVT Fords shared by two people who love each other and their Blue Ovals. Really, does it get any better?