Inspired by his brother’s Terminator, Jonathan Haymore swapped in a 5.4L modular 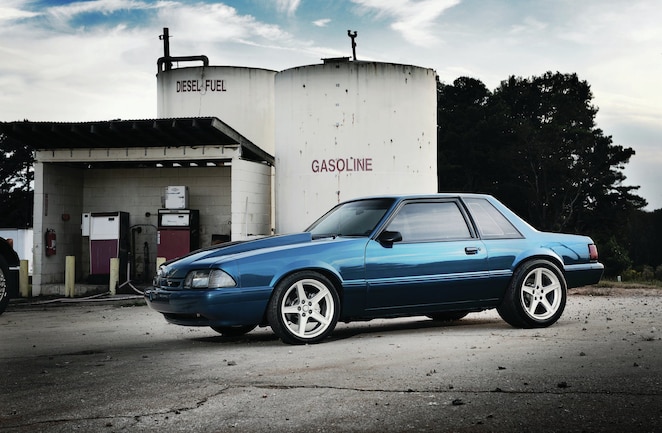 If you are a Mustang purist—known in our world as a Melvin—you may want to skip this story. It begins when an untouched Fox coupe takes a turn to the race track and ends at the intersection of Modular-Swap Drive and Hot-Street-Car Lane.

This circuitous path began when Jonathan Haymore experienced his brother's Terminator. Around this time he had just sold his beloved '93 Cobra and was on the hunt for a new project.

"I ended up selling the Cobra and picking up an all-original Reef Blue coupe from a guy in Chicago. Once I got the car, I immediately started tearing into it to install some go-fast parts," Jonathan said. "My original goal was to build an X275 car out of the coupe, so off I went. I installed a cage, minitubs, and all the other goodies to support 1,000-plus horsepower. I ended up making around 1,200 horsepower with a 363 and a T-6–framed 88mm turbo. The car was fast; it ran consistent 5.20s at 140 mph."

Surely many of you reading this would be happy to own a 1,000hp drag car. However, in the world of X275 racing, keeping up with the front-runners means keeping up with their spending. Jonathan decided it would just cost too much to keep his car competitive, so he adjusted his focus to returning the Fox to the street. Making that move called for something a bit tamer than the turbocharged 363ci small-block, and it didn't take Jonathan long to form a new plan for doing just that.

"My brother Jeremy had an '03 Cobra with a blower on it. I loved the performance and driveability that combo offered," Jonathan confessed. "Of course, never wanting to do anything typical, I decided to buy a GT500 motor out of a wrecked car. I was able to find a motor with 800 miles on it…"

Now putting a GT500 5.4 in a Fox has been done, but it is far from a commonplace swap. Jonathan had a headstart thanks to the flexible AJE K-member that once embraced the 363. A simple motor-mount swap would allow the 5.4 to bolt right in. He took it upon himself to modify a set of JBA Headers long-tubes to mate the big modular to the rest of the exhaust system. After about 30 hours of fabrication and welding, he had the exhaust solution he was after. Then he went about replacing the factory coil-on-plug ignition with a distributor driven off the cam drive. Combined with a crank trigger fitted to an Innovators West 15-percent-overdriven damper, the 5.4 was ready to take orders from a Big Stuff 3 standalone fuel injection system.

"…The car ran like a top. Tuning resulted in 540 horsepower through the TH400 with the stock unported blower that was making about 16 pounds (of boost). First pass out, this car ran a 6.23 at 115 (in the eighth-mile). I was tickled to death with it," he enthused. "The car drove perfect. I ended up driving the car to and from Mustang Week—4.5 hours each way."

Despite the fun combination, Jonathan is like most of us—he wanted more power. His next move was swapping out the stock Roots supercharger for a 3.3L Lysholm twin-screw blower. Simply swapping the blower delivered a massive increase. The GT500-powered Fox was now clocking modded-GT500 power—with 705 rear-wheel horsepower—at a much lighter fighting weight. Jonathan knew he was pushing his luck with the stock engine. Still, he wanted even more.

Turbocharging was always part of Jonathan’s plan for this coupe. However, what started as a pushrod- powered race car morphed into a street car. To make it even more streetable, he swapped in a 5.4L modular engine. After an engine issue, Jonathan turned to Justin Talbert at JT Motorsports to build a boost-friendly engine with JE pistons, Manley rods, and a Cobra Jet crankshaft. The stout short-block is topped by Ford GT Four-Valve cylinder heads, a stock GT500 lower intake, and a custom upper fitted with a mechanical FRPP Cobra Jet monoblade throttle body.

"I have always been a turbo guy, and when I bought the motor, my original plan was to turbocharge it. Off came the blower and I started my turbo build. I flipped the factory manifolds and built a turbo setup based around a Precision 7675-billet-wheel, dual-ball-bearing turbo. The lid is 6061 aluminum and is strictly a lid. I wanted to use the factory air-to-water (intercooler), which allowed me to use way less piping."

Even though Jonathan's coupe is street-friendly, he still likes to make some laps at the dragstrip. With the boost cranked up to 24 psi, he engaged some rice burners at an import-versus-domestic race. Shortly after a hard launch, the car nosed over and ugly, ugly sounds emanated from the engine. The block was trashed; he could only preserve the top end.

So, why not turn lemons into lemonade and build an even stronger engine for more boost? With the help of Justin Talbert at JT Motorsports, that's just what he did. However, any new combo needs dialing in, and it helps to have an expert tuner behind the keyboard.

"Kurgan Motorsports also got the call to tune the car. We fought some gremlins during the tuning session, which Bob was able to help diagnose. We were not able to fix them on the spot, but we were able to make a lower-boost pull and the car made 775," Jonathan explained. "My plans are to put in a set of custom cams spec'd by Bob Kurgan and put a slightly larger turbo in place of the 7675. Inevitably I would like to see four-digit horsepower and have a street car that has great driveability."

That sounds like a goal we can all support, Jonathan. Can you say King of the Street?

If the whoosh from the two Turbosmart blow-off valves wasn’t enough to clue in potential challengers, the massive 345 rubber allowed out back by the minitubs let’s you know this Fox is ready for action.

Horse Sense
If Jonathan's coupe looks familiar, that's because it previously appeared on these pages as part of a two-car feature with his father Jerry's Fox coupe ("Like Son, Like Father," June '10, pg. 66). Back then it sported a turbo 363ci combo.