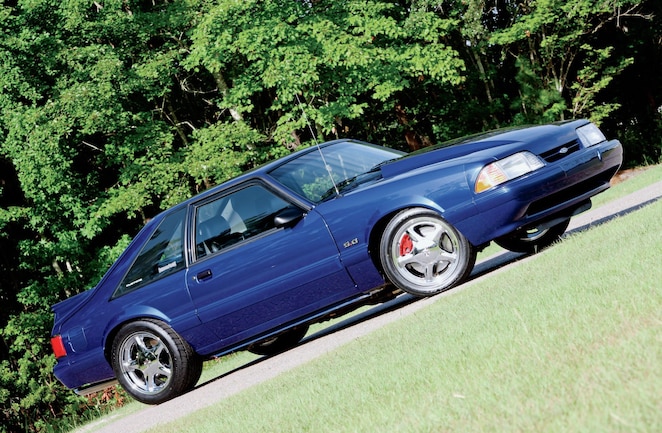 Twenty-one years after the Fox Mustang galloped off the production line for the last time, the car is still an inspiration to many.

In its heyday, the Fox captured the minds of young car enthusiasts with its combination of affordability and performance potential. That magic recipe turned the corner for Ford performance. No longer was Brand X the only game in town for aftermarket support. The Fox 5.0 created its own industry, and that legacy lives on today with the incredible modern Mustangs we enjoy.

Yet, even as the Fox is old and slow compared to its younger relatives, it still serves as a source of joy for many of its loyal fans. Across parking lots at car shows and in Internet message boards, the Fox still has an incredible following.

“…It was an exhausting effort and a monumental task to pull off. We built one heck of a car and actually met the deadline without killing one another, which is a testament to the members of Southeastern Foxbodies,” Troy said. “This was a rewarding project for our club on so many levels, and it shows what the Mustang community is capable of. People keep asking us if we will do another one. I’ll never say never, but if we do, I’m pretty sure I’ll just buy a ticket and let someone else run point.”

One such loyal group is the crew at the Southeastern Foxbodies club. Formed in 2001, this club is made up of some of the most passionate Fox Mustang fans that we have run across. From hosting the massive Fox cruise at Mustang Week to putting together this impressive charity Fox, the club keeps the love for Fox Mustangs alive. It was on that club’s website (www.sefb.net) that inspiration transformed into perspiration and admiration.

"Save A Fox is an idea that came about in early 2012 when one member posted on the club forum: 'We all have so many spare parts for these cars… I bet we have enough to build a complete car,’" explained Troy Raby. "That tongue and cheek statement evolved into the desire for our club to build a Fox and raffle it off for charity."

It was a great idea, but how often do you and your friends come up with a great idea, talk it all out, and never make good on the plan? Well, that was never a danger with the dedicated members of this club. Their passion for the Fox is contagious, and they quickly took the idea and went to work turning it into a reality.

"A project committee was formed by six SEFB members. The committee brainstormed and put pen to paper rather quickly with the basic structure of the overall project. Then we let the club determine the direction the project would take. We held voting on all aspects of the build, from motor, to paint, to interior, and beyond. The finished product would be exactly what the club wanted, and it would capture the essence of the Fox driving experience."

Like its outward appearance, the inside of Save A Fox takes the factory look and tastefully enhances it. A Florida 5.0 cluster filled with Auto Meter’s finest replaces the stock gauges. Meanwhile, TMI Products revamped the stock seats with its Cobra-style foam and new upholstery and supplied the custom door panels, while Redline Goods supplied the suede accents on the dashpad, shift boot, and armrest cover. The fresh carpet, floormats, and Dynamat underneath came to the car via CJ Pony Parts. In all, the result is quiet and classy. Underneath the factory floorpan, Stifflers subframe connectors keep the creaks at bay, and the company’s crossmember keeps the Latemodel Restoration-supplied Z-spec T-5 five-speed at home.
There’s plenty of cargo to hide under the cargo cover, as the Save A Fox is loaded up with a Kicker amp and subwoofer, along with a trunk-mounted battery. It’s a nice balance of fun and function.

Not only would the car celebrate the Fox, but the resulting raffle would benefit three worthy charities—the Juvenile Diabetes Research Foundation (www.jdrf.org), The Victory Junction Gang Camp (www.victoryjunction.org), and Savannah Drive, which benefitted an 8-year-old girl fighting Leukemia. The club would divide the raffle monies evenly between these three beneficiaries.

Long before the car could be raffled, the club had to find a car and save it. That began when Sam Poteat, the owner of Out To Pasture Pony Parts in Kannapolis, North Carolina, donated a well-worn ’89 LX to the cause. It was relatively straight and rust free, but it did suffer from pervasive hail damage and the commonplace relocation of the factory radiator support caused by a front-end collision. Still, it was a running four-cylinder Mustang, and the Save A Fox project had its start. From there the club was on a mission. They stripped the car to a shell, put it on a rotisserie, and hauled it to Mustang Week in 2012 to announce the project and start promoting the raffle. With tickets for sale and a build schedule set, they decided to hold the raffle drawing a year later at Mustang Week 2013.

"We created a 'parts wanted’ list and the members responded, donating a number of new and used parts. Knowing the grand prize needed to be something special, stepping up the safety, performance, and aesthetic portions of the build would require outside support," Troy confessed. "We reached out to the Mustang aftermarket community and the response was overwhelming…"

Simple and effective is the naturally aspirated combination under the hood. Assembled by Kannapolis Engine Service in Kannapolis, North Carolina, the rebuilt roller 351W is topped by 185cc Trick Flow Twisted Wedge heads and a Trick Flow R intake breathing through an Accufab 75mm throttle body and a Pro-M 80mm mass air sensor. Sporting 9.4:1 compression, KES left some room for the built Windsor to accept boost should the new owner chose to add more power. Even NA, the combo put down 328 horsepower to the feet.

Even with all the support the project received, it needed a home base. The plan was for various members of the club to pitch in on the build, but every build needs a shop. Fortunately, this project found a roof under a shop, but not just any shop. No, this outfit not only offered a roof, equipment, and parts to further the cause, its owner offered a near limitless fountain of knowledge about the Fox breed. The shop? Fox Mustang Restoration in Locust, North Carolina.

"My favorite part of building the Save A Fox was the connection that I made with the Southeastern Foxbodies members and seeing them all come together for this project. It was really amazing to have what seemed like an army of people in my shop who were willing to work on this project, even if they had no prior experience," said Matt Highley of Fox Mustang Restoration. "I would have several stations of mini-projects going on at once; I would show one station what needed to be done, and then move over to the next station and direct them. Before I knew it, we had 15-20 people working on this thing at once. I enjoy teaching people about Foxes and this project gave me the opportunity to do that."

Of course, building this sort of car in a year’s time required more than just the generosity of the club members. They needed some professional help to complete some of the major segments. Certainly Matt’s contribution of over 150 hours of labor can’t be overlooked, but the club also turned to Toyota West Collision Center to install the Scott Rod panels and Cervini’s hood, and then apply a mile-deep paint job in a modern Ford color, Deep Impact Blue. Meanwhile, Kannapolis Engine Service turned a $50 351 block donated by a club member into a stout, naturally aspirated small-block cranking out 328 horsepower and 359 lb-ft of torque at the feet.

"The club wanted a 'hot driver’ and we got exactly that. The car idles steady at 900 rpm with a fantastic lope, drives great, and pulls strong through a broad torque curve from the 358ci Windsor," Troy enthused. "It has all of this with the A/C on and the Kicker sound system pumping, without a single squeak or rattle thanks to the undercoating, Dynamat, and fresh weatherstripping. It may have originally left Dearborn in 1989, but it was reborn in 2013."

Reborn indeed. With the completed car leading the Fox cruises to Mustang Week, Troy and the entire Southeastern Foxbodies club pulled off an impressive feat. They had completed the car and sold 2,800 raffle tickets prior to Mustang Week 2013. By the time the drawing came around, the remaining 2,200 tickets had sold. All that was left to do was pick a winner. On the final day of the event at the big cruise-in, the club enlisted a random kid from the audience to walk up and pull one ticket from the tumbler.

"It never even crossed my mind that I would actually win," says raffle winner Andrew. "The car wasn’t even finished, and the pictures I had seen were of this red-and-black shell on a rotisserie. I just wanted to donate to the charities… the call from Troy caught me totally off guard.(My friends) kept saying, 'Who builds a car like this and just gives it away?’ I told them, 'These guys in North Carolina did!’"

Apparently Andrew wasn’t the only one feeling lucky that day. The club was relieved that a true Fox fan had won the raffle. "The entire club, especially the build committee, worried that the winner would might part the car out or do something contrary to what we intended. We had no control over that aspect, but it weighed heavily in the back of our minds," Troy confessed. "Ironically, Andrew is a Fox fan, and he had sold his ’92 LX hatch just a month earlier as he contemplated his next hot-rod Mustang. We made the decision easy for him, and it couldn’t have gone to a better person."

What began as an idea to reconstruct a Fox from used parts turned into a far more broad-reaching restomod project. In the process, it benefitted three worthy causes and brought the lucky winner a new Fox to enjoy. It really couldn’t have worked out better.

It also stands as a testament to the power Mustang wields not just under the hood, but also as a force to bring people together. Nicely done, Southeastern Foxbodies.

Major kudos to the Southeastern Foxbodies club for revamping this former four-cylinder Fox as a clean, classy 5.0 Mustang. A Cervini’s 3-inch cowl induction hood is the only body deviation, and the entire car was covered in modern Deep Impact Blue. The chrome Pony R wheels provide just enough accent to the DIB paint, and they mesh nicely with the shiny Flowmaster tailpipes.