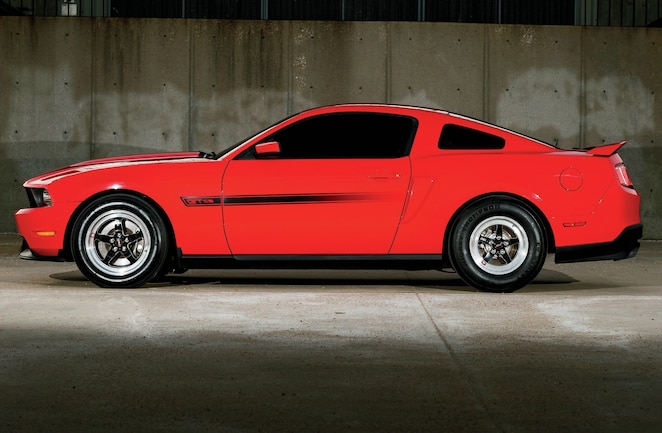 Every time I jumps into a new Mustang, I'm reminded of the suckiness of my old Fox. Or should I say, every time I get out of a new Mustang and back in my '93 LX, I am reminded how far the Mustang has come as an automobile.

A Fox Mustang might as well be a stage coach compared to new Mustangs. The new Mustangs are faster, quieter, and 100-times better cars than our beloved Fox ever hoped to be. For many of us, the Fox was our first Mustang love, so there's no replacing it, but there's also no arguing against the new Mustangs.

The Fox was built to go fast in a straight line and in a crude, brutish manner. To this day, the Fox Mustang dominates drag racing. Go to any drag event and count how many '79-'93 Mustangs are on the property. You won't be able to count that high, especially if you're at an Outlaw-type drag event. The sad truth is, a Fox doesn't make a nice street car anymore. The new cars are that much better.

Jack Haden once had a fast '92 coupe (a 9.30 car, BTW), but he wanted something more street friendly. The '11 GT/California Special that's featured on these pages fit the bill—a prime example of a bitchin' street Pony. Jack bought the GT/CS in December 2012 after he decided to sell his coupe.

The LX put the hurt on the locals thanks to a nitrous'd 393 Windsor with a C4, rollcage, Strange Engineering brakes, and the like. "It went a best of 9.37 at 145 mph, and I enjoyed it very much," Jack says, "but I wanted something more street friendly."

Once the coupe was sold, he went looking, and after a ride in a buddy's '11 5.0, that's what he set his sights on. Being from Moore, Oklahoma, Jack found his new ride south of the Red River in Texas. He had the car shipped north after buying it sight unseen.

"I was in love with the car from day one," Jack says. "I wanted to keep this car a nice, simple setup, with wheels, a turbo, and a few cosmetic goodies," Jack adds.

Jack’s GT/CS still boasts a full interior, including satellite radio, heated seats, A/C, leather, and more. We’re sure his old Fox didn’t have these features, which is why he wanted to upgrade in the first place. To keep an eye on the turbocharged combo under the hood, Jack employed an AEM digital wideband, and to keep tabs on boost, a Turbosmart e-Boost 2 boost gauge and controller. Other than those two gauges, the GT/California Special’s interior is stock.

By February and March 2013, parts were being thrown at the car, including a Hellion Power Systems single-turbo system, Shelby GT500 wheels, lowering springs, and a few other small things.

Once everything was installed and looking good, he couldn't have been happier with it. Unfortunately, the No. 8 piston turned that smile upside down.

"This was more than disappointing," Jack says, "but nothing we couldn't fix."

The parts list went from rods and pistons to head and main studs, to adding a converter and building the stock 6R80 transmission, to beefing the car's rear end.

The thing with many turbo combinations is that from up top you can’t see the turbo. In the case of the Hellion Power Systems single turbo system on Jack’s car, it’s not a plus since we can’t see it in this photo. In Jack’s case, it’s probably a good thing since the car sees street action. A big turbo standing at attention under the hood might reduce the amount of unsuspecting prey on Jack’s part. To those that aren’t too bright, this is a stock Coyote engine with a Boss intake. The larger-than-stock inlet pipe, and more importantly, where it leads should alert to the contrary, but at the time of night when Jack and the GT/CS do their best work, lack of a flashlight makes them pay. The car ended up putting down 752 horsepower and 702 lb-ft of torque at the tires at 18 pounds of boost on Murillo’s Mustang Dyno.

"Within six months of purchasing the car, it went from bone-stock to blown up to a full build," Jack says. At this point, he practically had a brand-new car torn down to a shell. He adds, "This had me thinking, what the hell am I doing?"

He knew what he was doing, though. He sent the engine to his buddy Shaun Sweeten at Sweens Performance Machining in Pocola, Oklahom,a where he brought the short-block back to a stronger, boost-ready life. When he had the short-block back from Shaun, the rest of the engine was assembled, and the transmission and converter were mated to it.

"With a ton of help from my friends and my wife's patience, it was all put back together from the ground up," Jack says. The car had an all-new suspension, engine, transmission, rearend, fuel system, wheels, and tires—everything. "It was better than ever," Jack adds.

Running flawlessly since the build, the only missing piece to the puzzle was a custom performance tune.

"I chose Mike Murillo in San Antonio after a buddy recommended him," Jack says. "Mike was beyond helpful, as well as the staff down there, during the process of making some killer power," Jack adds.

The car ended up putting down 752 horsepower and 702 lb-ft of torque at the tires at 18 pounds of boost on Murillo's Mustang Dyno. At Jack's local track, Thunder Valley Raceway Park in Noble, Oklahoma, where he used to terrorize with his coupe, he has run a best of 9.76 at 146 mph. But now, with the GT/CS, he can load the wife and baby girl in the car, head to the track and bust off some 9s, then load up the stroller and his two favorite ladies, and cruise back home.

Jack says the car continues to be a work-in-progress, pretty much like everyone’s Mustang. “The car will be getting a few cosmetic mods, and a couple go-faster parts,” Jack says. “Should be an awesome 2014 with the car going even faster.” That means Jack will need even more support and patience from wife Stephanie. “She is my biggest supporter and fan, wouldn’t have been able to do it without her,” Jack adds.

Horse Sense:
Jack says he couldn't have asked for better customer service or help than that from Murillo Motorsports' Mike Murillo. "That's always nice to see for a change, especially in the automotive world," Jack says.