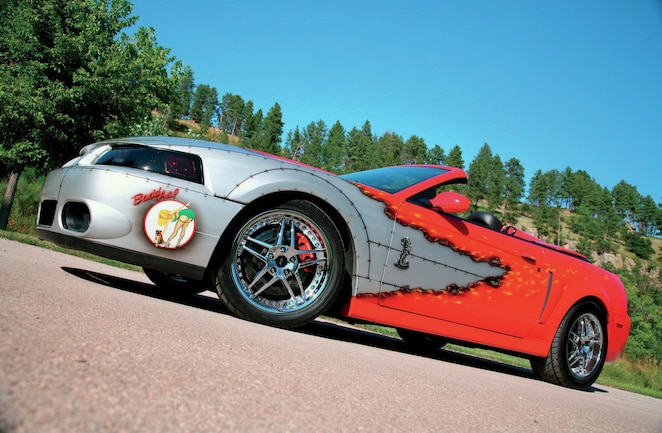 Even though the world’s favorite pony car has frequently worn some form of running horse badge over its multi-decade history, there’s little doubt that also sharing a name with the iconic P-51 Mustang—arguably the most capable and aesthetically pleasing Allied fighter aircraft of WWII—hasn’t hurt its macho image amongst the car’s primary demographic. By comparison, can you imagine anyone ever naming a manly combat aircraft Camaro?

From the time Gary Hamlin Jr. of Hammond, Wisconsin, picked up his new Torch Red Cobra convertible back on July 30, 2002—not long after the obscene terrorist attacks of 9/11—he knew he wanted to someday theme it as a tribute to the American armed forces, who have sacrificed so much to defend not just our own freedom but seemingly that of the whole world. What better way to do that than to make his Mustang resemble, well, a Mustang? Which explains why the front half of Gary’s ‘03 Terminator is now painted to bring to mind the riveted aluminum skin of a P-51D Mustang fighter. 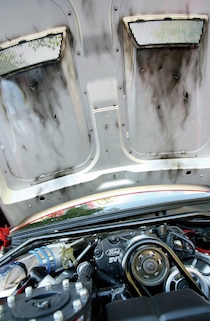 “It took five years to imagine a paint scheme to honor our military heroes,” Gary said. “It was painted February through April 2009 by X-Treme Paint in Wyoming, Minnesota. I stopped there on a weekly basis to check progress and keep true to my vision.” We can only assume that the look of weathered, streaked aluminum, the faux panel lines, and rivet details, the mid-body tear-away scheme dividing the silver and red portions, as well as the trailing yellow flames must have consumed many hours’ worth of airbrushing skills.

This WWII aircraft persona continues with the retro, pinup-style nose art on each side of the front fascia forward of the wheelwells, highlighted by this Cobra’s catchy nickname: Badd Asp.

The name needs little explanation (except possibly for its spelling) and Gary tells us that the pooch benefitting from the attention of the classic pinup girl is Jazzy, a family pet lost to a brain tumor in 2008. We have to assume that the inspiration for the pinup girl herself is Gary’s wife, Tracy.

Tributes aside, for Gary, it’s all about getting in and driving his highly distinctive Cobra. “If you see it on a trailer, it’s been stolen or is broke,” says Gary, and we don’t think he’s joking. We caught up with the Hamlins at the Sturgis Mustang Rally, which would have been a pretty good jaunt from their Wisconsin residence. Gary was right at home surrounded by fellow ’Stangheads at Sturgis: “I love to talk to people at car shows—especially military vets—and explain the theme and inspiration for the car, and listen to their stories.”

Stiegemeier Porting Services worked its Snake Bite magic on Gary’s Eaton blower. Combined with additional inlet and exhaust mods, the result is a driveable 507 hp and 558 lb-ft of torque at the back tires. The aluminum intercooler reservoir is from Fore Precision.

And obviously there’s more for him to talk about than just the Cobra’s paint job. Internally, the Hamlin Terminator’s Four-Valve 4.6-liter remains stock and, for now at least, is still fed by a production-style Eaton M-112 Roots blower. But Gary shipped said supercharger—and its lower intake—to Stiegemeier Porting Services in St. Charles, Missouri, for its Stage 6 porting and Snake Bite upgrade (www.stiegemeier.com). The inlet side was also freed up with a BBK twin-65mm throttle body and inlet tube downstream of a C&L 95mm mass-air sensor that Gary tells us he has ported and polished. On the exhaust side, the factory headers remain but feed into a nicely vocal Bassani 3-inch stainless system.

Today such mods may seem minimal (especially within these pages), but there’s no arguing their effectiveness. The fighter-themed roadster now has 507 hp and 558 lb-ft of grunt available at the rear tires. Even so, Gary says there’s a Kenne Bell 2.8-liter twin-screw blower in his Cobra’s future.

Beyond that, the extroverted convertible is lowered and armed with brake upgrades, as well as road-worthy suspension and rolling stock suitable for its two-pronged primary missions of touring and crowd gathering. And, occasionally, it gets attention from unexpected quarters:

“On the way to the Car Craft Summer Nationals,” says Gary, “we had a Minnesota state trooper pull out from the median, pull up next to us, and say ‘nice car’ over his PA, then pull back into the median.” Oh, if only all our meetings with law enforcement should be so cordial…

Torch Red was the third most popular color for ’03 Cobra ragtops. Of 5,082 convertible Snakes built that year, 582 were of that particular hue. (Black was the most popular at 1,679, followed by RedFire at 610. Rarest were those in Satin Silver, with only 81 built)