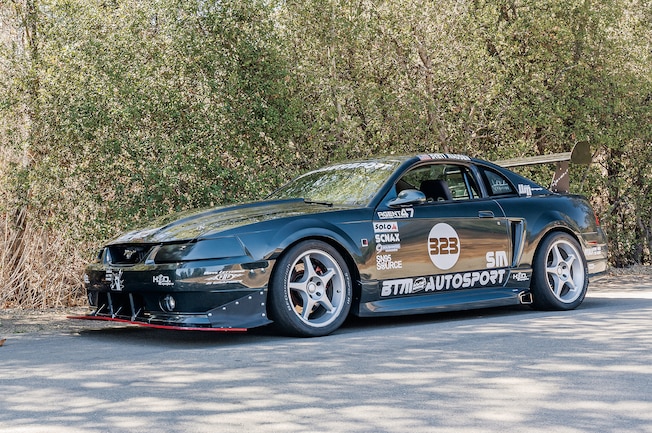 The weekend of April 21, 2013, this author was living a dream. I had the keys to a ‘13 Shelby GT500, and I was in LA. Life couldn't get any better. I was driving an amzing car on perhaps the most amazing roads in America. Sunset Boulevard, Pacific Coast Highway, Mulholland Drive, and the like, were on the GPS more than once that weekend. I played ball at Venice beach, ate at In N' Out Burger, sat in traffic on the 405, walked Hollywood Boulevard, among many places. However, I did have to do some work that weekend, which involved attending the Fabulous Fords Forever show at Knott's Berry Farm, which is the first time I was able to attend that show.

I was in a euphoric state. Life couldn't get any better. I was driving the baddest Mustang ever built in the coolest city in America, but Brett Madsen's little Two-Valve Mustang you see here stopped me in my tracks.

Sure, you can see why it stopped me in my tracks, what with spoilers here and aerodynamic aids there. I'm probably lucky, and so is Brett, that I didn't trip on and destroy the car's splitter. I do have a history of destroying splitters. But no, it wasn't so much the car's body mods that stopped me in my tracks as it was the engine of choice under the Steeda Autosports Q400 fiberglass hood. It wasn't an exotic Four-Valve or built pushrod engine—it was just a humble Two-Valve making 388 rwhp and 385 lb-ft of torque. Hold on a second—what?! How is this car making that much power? The engine looked amazingly stock, which made a head scratcher out of the dyno sheet propped up in the engine bay. I snapped a couple pics, and car owner Brett Madsen walked from behind the car to investigate the dork holding the camera.

At the time, I was about to jump into a Two-Valve engine build on my former car, an '01 Bullitt, and seeing the power Brett's car made with simple factory pieces gave me hope that I would be able to replicate those numbers. (I wasn't able, too, but I digress.) There are several keys to the power of Brett's Mustang, but let's pump the brakes and get to know Brett before we get all technical.

"I've known since I was a child that all I wanted to do was race," Brett says. At the impressionable age of two weeks, his parents had him at Englishtown, New Jersey, to take in some drag racing. Brett's dad has always been into all forms of motorsport, and the race fuel didn't fall far from the can. "As I grew up my passion for racing began to grow, and being a '90s kid, the first Mustang I remember seeing and remember pointing out to my parents from the back of our mini-van was the '96-'98 Mustang," he says. From then on he became obsessed with SN-95 Mustangs.

The interior of Brett’s Roush resembles that of a weekend race car. The seats look like expensive name brands, but are actually replica units with g-Force six-point harnesses. An OMP Racing steering features a NRG quick release and Momo hub to further drive home the car’s true nature.
The A/C is gone, as is the stereo (you probably wouldn’t hear it over the side exit exhaust, anyway). The rear seat has been pitched, too, as has the carpet from the from the rear area. There’s also a custom progressive shift light, a gutted dash, Florida 5.0 delete panels, a custom HVAC panel, and a DetRiot gauge cluster with an Auto Meter oil pressure gauge and PLX DM-5 wideband.

Fortunately, this magazine was there to help sort everything out for him, and his obsession turned into ownership at 16 when he purchased a '98 V-6 Mustang. "It was nothing special, but it didn't stay stock long," Brett says. The '98 would become the first car he would take to the track, and at the end the V-6 had been punched from a 3.8-liter to a 4.2-liter stroker with lots of suspension mods. Brett tells us under his tutilage, the V-6 was an "absolute blast," but after having a Porsche blast past him at 140 mph, he knew he wanted a car with a little more oomphto it.

It would take Brett another two years of saving his pennies and dimes for a little-old-lady-driven '99 Roush Stage 2 Mustang off Craigslist. The car had been kept in a storage unit, was bone-stock, and had just 60,000 miles on it. The little ol' lady part is a stretch, but Brett does say it had an "elderly owner." The color, Dark Green satin, was a rare hue on a Roush. Most Roush owners want their car to stand out in a crowd; for one to escape in a more subdued tone makes for a rare Mustang. "Needless to say, I test-drove it, fell in love with it, and took the '99 Stage 2, Roush-built #3115 home," Brett says.

Since the day Brett bought the car back in January 2010, it was his goal to build the Roush into a NASA American Iron car. However, as all of us can attest, sometimes our budget curtails any big modifications, making us choose carefully what is done to the car to keep it street-friendly, but progressing towards our ultimate goal. Brett's girlfriend, Natalie, was also competing for his attention, and frankly, the same dollars, which often put the car on the back burner. "Ironically, she calls my car ‘the other woman' in our relationship," Brett says.

However, as both time and money intersected, Brett steadily worked on the build and documented his progress on several Mustang forums, with the engine build becoming affectionately known as Project: E85 Torpedo. Brett's plan was to find a cheap, light, reliable, and powerful setup that he could run.

His first purchase was a '98 Cobra Teksid block that had a scuffed cylinder from a bad piston ring. Brett took the block to MMR to discuss build plans, and the guys decided on a MMR 600 short-block since it utilized a cast crank, I-beam connecting rods, and Manley Performance pistons. The block was decked for more compression, while the Manley pistons were also chosen to further enhance the overall compression ratio. MMR dynamically balanced the rotating assembly from the Steeda Autosports harmonic balancer to the Fidanza aluminum flywheel. MMR finished off the short-block with one of its windage trays, and called it good. "I had nothing short of a great experience with Mark at MMR," Brett says.

When it came time for the engine's top end, Brett picked the brain of Modular Head Shop's (MHS) Nick McKinney. "I'm surprised he didn't tell me to get lost after all the emails I had sent with questions regarding what I should run," Brett says. However, Nick was also nothing less than extremely helpful, and Brett purchased a pair of MHS Stage 3 Ugly Duckling heads, which Brett tells us are Romeo five-threaded heads, along with a pair of MHS Stage 4.5 camshafts. Brett sent Nick a set of Ford GT followers he had purchased from MMR, and MHS also milled the heads 0.030-inch for even more compression. More on that later.

The Trick Flow adjustable cam gears were TIG-welded in place, with the cams being perfectly timed for maximum power, and everything needed from the existing engine was added to the new engine, while the new engine received a pair of MAC long-tube headers, an Accufab intake plenum, Roush 75mm throttle body, Ford Racing 42-lb/hr injectors, and a JLT Performance Ram Air intake with a 90mm mass air meter.

People told Brett he was wasting his money building a Two-Valve, and that’s pretty much why he did it. No one wants to be told they can’t do something. “This fueled my fire to build the car,” Brett says. Running on E85, and with the MMR/MHS Two-Valve but handling the engine’s final assembly on his own, the combo is good for 388 horsepower and 385 lb-ft of torque. For basically a 283ci Two-Valve with a lot of compression, well-prepped heads and valve train, and even a stock though port-matched intake, those are very respectable numbers.

"We had the engine in on Sunday and fired it up thanks to the amazing tuning skills of Joe at Trick Tuners," Brett says. A few weeks later on Joe's Dynojet, the car made 357 horsepower and 358 lb-ft of torque at the wheels. Like many of us having high hopes for newly built engines, Brett had hoped it would've made more. "(Those are) stout numbers, but it seemed like I was short-changed somewhere," he says.

Those are actually really good numbers, as we've discovered ourselves after finishing our own Two-Valve. However, Brett knew there was more to have, so he set about finding out why it didn't make more power.

All roads lead to the intake as the culprit, so he purchased another stock PI intake, carefully port-matching the intake to the cylinder heads. "It took lots of time," Brett says, "but it was well worth it because when I brought the car back with Joe's new tune, it made 388 horsepower and 385 lb-ft of torque."

The port-matching and Joe's new tune was worth 30 horsepower, and that 388 horsepower number is what caught our eye. The car's aero package also brought us in; that it had the personality and brains to go with the aero package sealed the deal for us.

Brett's first autocross with the car came in February 2013. "Since then, I have been hooked on improving myself as well as the car," Brett says. "Everybody hears the car coming from a mile away. Due to its dark green color, it has been designated the Godzilla of autocross in the San Diego region," he adds.

Brett says everyone told him he was wasting his money doing a Two-Valve build, especially a naturally aspirated one. That drove him to prove them wrong. He is reminded of a quote from Al Papitto: "You'll never truly understand building engines until you can make power naturally aspirated. Forced-induction overshadows an engine's defficiency."

And as Brett's combination proves, a little ... we mean, a lot of compression can be the difference from getting passed on the straight and being Godzilla.

Horse Sense: Brett has a thread over at SN95 Source.com documenting the weight he removed from the car. He even has pictures of removed parts on a USPS scale. Now that's documentation, right there.