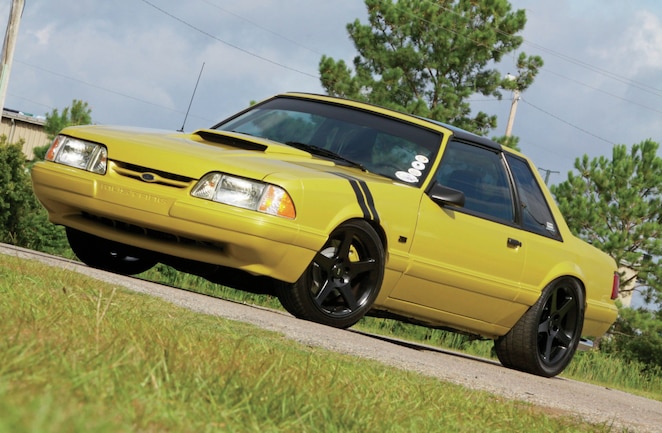 Like recalling a first love, Mustang fanatics can remember the moment when the Pony car galloped into their hearts. For Terry Moore of Statonsburg, North Carolina, his was at the moment he sought to master the art of the manual transmission.

"…I got the Fox body flu at the age of 16. A friend of mine was teaching me to drive a stick. He had a '79 5.0 coupe with a four-speed trans," Terry Moore explained. "Since then I've had a few Foxes through the years. Then came kids and other priorities in life, so I felt like I needed to move on from the Fox."

As sad as that might be, the realities of life can often cause us to stray from our passions. It's hard to ignore the responsibilities of daily life. That doesn't mean we have to give up on our automotive hobby, but it does mean it might have to go on hiatus. For Terry, his love of the Fox Mustang came back to the forefront when his son TJ reached driving age and started looking for a Fox of his own.

Terry Moore put in over 60 12-hour days on this project. His hard work and dedication delivered the unique Fox he set out to create. He credits his wife, Sherry, for making it possible. “Without her support, this Fox would have ended up in the crusher,” Terry said.

"When my middle son turned 16, he had his eye on a pretty, red '92 GT convertible. It needed a little work, and that's what started it all for me again," Terry confessed. "We fixed my son's 'vert, and I got the Fox fever again, so I built a 347 coupe."

It turned out that such a traditional project just wasn't enough to relieve the symptoms of his Fox flu. Terry had something else gnawing at him.

The fates were apparently on his side. Terry used his automotive talents to help a friend repair some wiring issues with his truck. The friend was at wit's end, and Terry weeded out the issues and got the truck working properly. Despite saving the day for his pal, Terry declined payment. Persistent, the friend instead offered to give Terry an old Mustang as payment.

"He said, ‘Hold on, I know you like Mustangs, you can have this one.' He had an '87 coupe, tan-on-tan, with a four-banger and an automatic," Terry said. "It was on from there. I had seen pics of an SN-95 dash in a Fox and I really liked it.

As with many other aspects of Terry’s project, mating the ’96 dash to the Fox interior required a lot of cutting and welding. Don’t think that it’s in there just for show, however. Terry not only made the swap aesthetically pleasing, but he made certain that all the accessories, including the air conditioning, function as they should. Those seats are the newest transplants in the car. Terry grafted ’07 Mustang seats onto the SN-95 power seat tracks. Yes, those work too.
This Hurst handle is bolted to Tremec’s vaunted T-56 six-speed manual trans, which is joined to the Two-Valve via a SPEC Stage 2 clutch.

"The big question was the door panels," Terry explained. "Could I make something that would pull the dash into the rest of the interior? To me that was key to the swap."

From the moment Terry put the concept of turning his Fox coupe acquisition into a one-of-a-kind project, he was on a mission. He scoured Craigslist, eBay, and many U-Pull-It salvage yards to collect the parts he need. He picked up a '96 Mustang GT interior donor car for $500. All the while he collected the parts he needed and sold those he didn't to keep the project headed toward the finish line.

Terry had the car up and driving around for two years before the urge to modify it overcame him again. He didn't want to simply add some bolt-ons or change the wheels. Nope. Not Terry. He decided to cut a section of the roof out.

"The T-top idea kept popping in my mind, so I started looking for a T-top donor car that I could get the frame, glass, and any other parts I needed…" Terry recounted. "The next time the wife left me home alone, I took out my 4½-inch grinder with the cutting wheel and cut the center of the roof out."

After this move, Sherry Moore was probably a bit hesitant to leave the house again. However, Terry obviously made good on the modification. He took great care to get all the parts necessary to ensure the car had aero-Fox-spec T-tops, rather than those from the earlier Four-Eyes. He is serious about Foxes after all.

Engine swaps are clearly the final frontier for Fox Mustangs, but it’s not too often that you see this juxtaposition of power plant and chassis. The Two-Valve 4.6 under the hood not only give this classic a modern engine, but it continues the theme started by the ’96 GT dash swap inside. Terry hasn’t strapped his car to a dyno, but we know the bolt-on 4.6 makes enough power to bring a smile to his face.

Like the rest of the car's mods, the T-top conversion looks like it came from Ford that way, yet it is one of those subtleties that Terry wanted the true Mustang fans to notice. Most are on board, but some Melvins don't approve.

"The majority of them love it…" Terry said. "Some true Mustang fans don't like it when you change stuff. They don't like you disgracing a Fox, but more love it than hate it."

You can put us in the love-it category, Terry. The Fox flu suits you well.

Fitting for a car that was reborn to this level, it is sprayed in an ’05 BMW hue dubbed Phoenix Yellow. Obviously Terry appreciates the paintwork, as the man behind the paint mask receives kudos right on the back of his Fox: “Paint By Junior Quincy.”

Horse Sense:
The level of custom work and elbow grease that Terry Moore put into this project is mind-boggling. He even welded and re-drilled the stock axles for a homegrown five-lug conversion.