If you can believe it, Bobby Aldrich’s ’78 Mustang Cobra II was a $300 eBay find 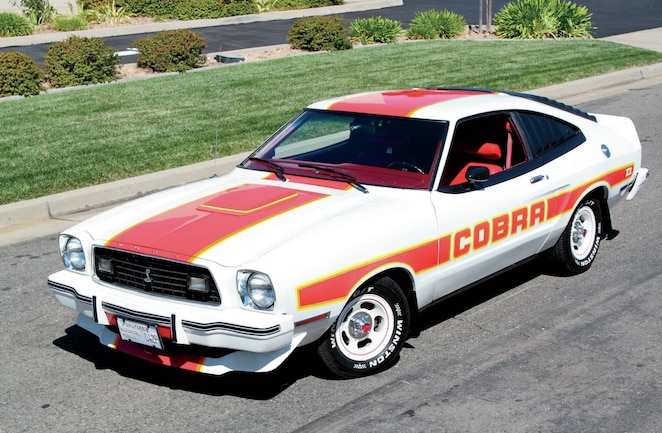 The Cobra nameplate has commonly been used to describe Ford high performance on and off for nearly half a century. Carroll Shelby claims the name for his roadster came to him in a dream. He awoke in the middle of the night, jotted the words that appeared to him in his sleep on a notepad, and went back to sleep. When he awoke the following morning he saw the word “Cobra" on the slip of paper. Others think he actually remembers the word from his early racing career when lightweight, sheet-steel, copper-brazed engines were used. Powel Crosley took this type of engine into production in the early '40s and named it “COBRA," short for copper-brazed. The “COBRA" name was usually stamped on the valve cover by the engine manufacturers, thus Shelby may have recalled that. Then again, the venomous snake just makes for a great emblem with its hood spread in a characteristic threat display.

Besides being used on the 260, 289, and 427 roadsters, the Cobra name was used on '68-and-later Shelby Mustangs, '69 and early '70s CJ-equipped Fairlane/Torinos, and later on the SVT-prepped late-model Mustangs. In the mid-'70s, the name was resurrected to give the Mustang II a performance image. When Ford introduced the Cobra II for the '76 model year, it emulated the look, if not the performance, of a Shelby GT 350. The Cobra II had stripes, a hood scoop, quarter-window louvers, cobra badges, and spoilers to update the Shelby look from the previous decade. The base engine, though, was the 2.3L four-cylinder, with the 2.8L V-6 or 5.0L V-8 available as options. Ironically, the more sedate-looking Mach 1 package came standard with the V-6 and optional with the 5.0. Nonetheless, few Cobra IIs were outfitted with the 88hp four-banger, as most opted for the 139hp V-8.

For the '78 model year, the Cobra graphics were revised with tri-color stripes with large Cobra lettering running down the body sides. Color choices for the stripes were white with red, green, or blue and black with gold. While the earlier Cobra IIs were ridiculed by the press for being Shelby wannabes, the '78 Cobra II was lambasted for its loud graphics. Rear window louvers also became available this year and were a great addition. Bobby Aldrich owns one of those “colorful" striped '78 Cobra IIs, with his being powered by the base 2.3L four backed by a Borg-Warner RAD four-speed transmission.

The Placerville, California, resident found the car on eBay in September 2004, being sold as a parts car. Bobby, though, was thinking restoration. He was drawn to it because it was equipped with the four-cylinder. “Very few were made with the 2.3, and only a couple have been registered on the Mustang II Network site," Bobby says. In fact, a fellow www.mustangii.net member from Michigan was also bidding on the car, but stopped once he knew Bobby was also interested in it. The car was located in Los Angeles, so the shipping costs to Michigan would have added a substantial amount to the final cost of the car, and he knew it would be in good hands with Bobby. Thus, Bobby won the car with a bid of just $305.

Bobby could tell in the pictures that someone had tried to install a 2.0L four-cylinder engine. When Bobby arrived to pick up his winnings, the car had been in the back of an auto repair shop for almost 20 years after the original engine had seized. Bobby said their engine swap failed because the 2.0-liter and 2.3-liter are completely different. “Nothing is the same," Bobby says. “They were trying to modify various things to make it work, but they never did."

The red interior of Bobby’s II is a mix of good used and hard-to-find N.O.S. bits along with fresh seat upholstery in the factory color and sew pattern.
The optional rear hatch louvers not only offered some shade to protect the interior and keep rear seat passengers cool, but they went well with the Cobra II’s quarter window louvers as well.
The 2.3L four-cylinder base engine lived a long and successful life in the Mustang. From its origins in the Mustang II all the way up through the ’93 Fox Mustang. The engine benefited from updates such as fuel injection, dual plug cylinder heads, and even turbocharging in the Turbo GT and SVO models of the Fox era.

Soon after Bobby returned home, a great opportunity came along. Bobby was contacted by a local wrecking yard that knew he was a Mustang II enthusiast. They asked him if he was interested in a low-mileage coupe that was recently involved in a wreck. All the dismantler wanted was the front suspension. Bobby was able to purchase the 2.3L four-cylinder and wiring harness to help restore his new Cobra II project.

He then set out to do the bodywork and also decided to spray the Polar White paint himself. The results are excellent for a first timer. The stripes, though, were a more difficult endeavor. He had to have the stripes custom-made because they weren't obtainable when he conducted this restoration. He picked up a N.O.S. green stripe for a graphics company to use as a template. “This was a very expensive stripe kit," explains Bobby. Since then, Phoenix Graphics has made the '78 Cobra II stripe kit available.

Bobby had a local upholstery shop make up seat covers while he handled all the other interior work using a mixture of N.O.S. and good original parts to the red deluxe vinyl internals. Though powered by the base engine, Bobby's Cobra II is nicely equipped with a center console, AM/FM eight-track radio, five-slot painted wheels, and handling suspension, also a rarity on a four-cylinder Cobra II.

Production numbers for the Cobra II in its swan-song year fell to 8,009, well below its high of 25,259 in its inaugural year. While some believe the stripe package were partly to blame for the sales slump, part of the drop could be attributed to the 4,960 one-year-only King Cobras that were built in 1978. Though Bobby's Cobra doesn't have the bite that its predecessors had, it handles just as well, has plenty of curb appeal and was the perfect car for the times. It was just a different version—let's call it Cobra II.3.