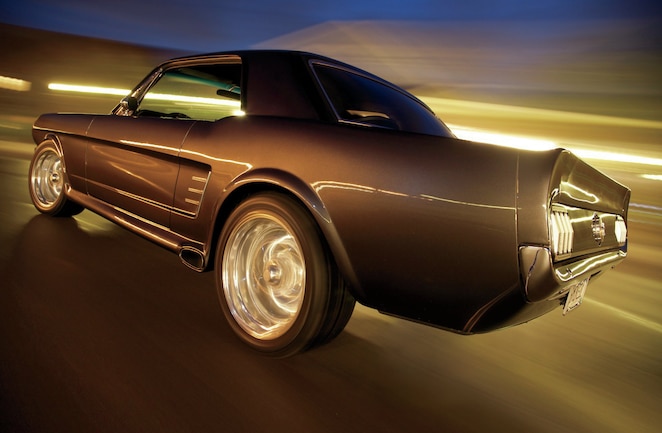 "The car was in poor condition overall when I got it," Scott Sanford says about this '66 Mustang coupe. "It ran…but not very well. The body was dented and paint was in bad shape. Interior ripped and sun-baked—two sets of seat covers says it all! But with little to no rust, it was a good candidate for restoration."

Another classic Mustang fanatic rolling the purchase dice? Not quite. In this case, Scott knew much of this tired notchback's history, because it had been his mother's daily driver for no less than seventeen years. His mom (who was its second owner) really loved the vintage notchback, and even after losing her driver's license for medical reasons, hesitated to give up her treasured Mustang. After her license was revoked, the factory 289 2V coupe continued to sit, unused, in the family's Reno, Nevada, driveway for an additional two years before finally being offered up to Scott for restoration and modification, back in 2010.

At the time, for reasons of vehicular nostalgia, Scott had been looking for a '67 or '68 to restore, since his own very first Mustang had been of that particular vintage. But the opportunity to preserve and resurrect a pony that had such deep, long-term family ties was just too much to resist, so Scott soon trailered the hand-me-down hardtop from his parents' Nevada home to his own digs in Greeley, Colorado. After beginning teardown at home, he soon dropped the project off at the door of a local shop known as Cool Cat Customs, where the bulk of the exterior and chassis work was then undertaken, with Scott taking an active role as project manager on the build, overseeing the direction of modifications and making sure all the appropriate parts were on hand at the shop when needed.

At the shop, it was immediately confirmed that his parents' dry Nevada climate had been very, very kind to the old coupe: "We only found about three spots [of rust] on the car, smaller than a quarter," says Scott in describing its unreal solidity. Despite such well-preserved sheetmetal (aside from all its dings, minor road warts and a bit of front-end collision damage), Scott knew the family '66 would not remain stock. Had he found a '67 or '68 to do, his plans were for an Eleanor-style build. In this regard, he'd already been eyeballing the body offerings of a company called Fiberglass Specialties, out of Boulder City, Nevada, which luckily also manufactures a somewhat Eleanor-esque kit for the earliest Mustangs. Consisting of front fascia, side skirts (with exhaust cutouts), cowl-style hood, and rear decklid with duckbill spoiler and endcaps, this Fiberglass Specialties kit set the basic tone for Scott's exterior mods, though shaved door handles, sequential LED taillights, a frenched gas cap, and myriad other custom details further personalize the coupe, now finished in DuPont Dark Charcoal with ghost stripes. That charcoal hue kind of goes along with Scott's "SMOKED1" plates—which are also a nod to his favorite Sprint Cup driver, Tony Stewart (Uh, doesn't Smoke drive a Brand C? Nevermind.)

Inside, Scott's project shows a similar blend of OEM styling—as in the beautifully re-skinned factory-style seats—and modern touches like a custom console with HVAC controls, along with assorted billet trim and hardware, and the leather-wrapped Flaming River waterfall steering wheel on an ididit tilt column. The shifter is Hurst's V-Matic, the engine is now pushbutton-started, and the instrument cluster and matching glovebox door are CNC-milled T6061 aluminum by JME Enterprises. Cabin makeover was performed by Steve Markley Interiors, of Greeley, Colorado, and you can see that it favors comfort and class over any form of raciness, as Scott's mission for the notchback consists primarily of cruises and extended road trips.

The updated powertrain reflects that road-friendly role. The car came to Scott with its original C-code 289 and C4 automatic. He removed and sent the small-block to Accelerated Auto (in Greeley) for a bottom-end rebuild using 0.040-over 10:1 pistons teamed with a livelier Comp Cams roller bumpstick and an all-Edelbrock top end featuring E-Street alloy heads with 2.02 intake valves, an aluminum intake and Performer 600 carb. Admittedly more mild than wild, the rejuvenated small-block now sits upstream of an AOD four-speed automatic and an 8-inch axle packing 3.50 gears and a clutch-style limited-slip diff. Scott reports that the mild gearset helped by the AOD's 0.67:1 overdrive provide both effortless cruising and off-the-line performance that is way more punchy than stock. Spiffed up with March Performance billet serpentine front dress, complete with A/C, the 289 looks clean and stylish in an engine bay now free of shock towers, thanks to a Mustang II front suspension conversion complete with tubular unequal-length control arms, coilovers, and rack-and-pinion steering, all from Autoworks International. Rear suspension remains conventional, but is upgraded to five leaves and set up for lower ride height, and hulking Wilwood 12-inch discs now hang at each corner.

The three-year project came home to Scott just prior to last July's photo shoot, but he admits he's still in the final detailing and shakedown stages (is a Mustang ever finished?). Still, the rejuvenated hardtop has already impressed its previous owner. "She actually cried," Scott says of his mom's reaction upon seeing her former commuting companion all dressed up and ready for at least another couple decades of service in the Sanford family. Yes, it's a cross-generational keeper.