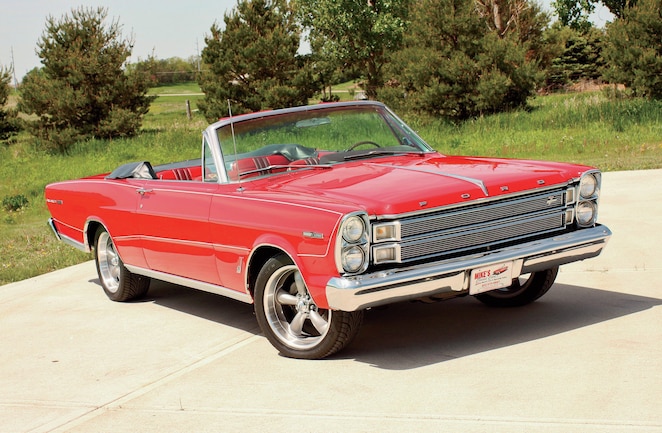 What's your thing? Loud and proud? Small and nimble? Quick and flashy? Hey, this is America, where you're free to do your thing.

Not that long ago, our thing was big. Big front to back, big side to side, and of course, big under the hood.

Even the name was big—Galaxie—named after a heavenly body of colossal proportions. That's what we've got here: Big, whoppin', mondo, gigando, mucho grande. Big everywhere. Big in every possible way. Dig it.

The actual model is a 7-Litre Galaxie, Ford's premium fullsize model built to showcase Ford's new-for-'66 428 engine. What about the world-beating 425hp 427? It was available too as an extra-cost option on the 7-Litre for the handful of customers who wanted the highest possible option.

But if you knew your stuff, if you really had your finger on the pulse and your ear to the ground, you knew that there was one more step in the quest for the ultimate. Deep within the system, Ford had something even wilder, hotter, and yes, bigger. But you had to know where to look, who to ask, you had to have some strong scratch, and you had to know the insider's code.

The trick was to go past the option list. This engine was off-menu, so forget the salesmen and order forms. Walk out of the showroom and head for the parts department. “C?” was the part number you asked for. That was the parts department code for a complete 427 SOHC crate engine. Choose single four-barrel or two four-barrels. Either way, you're getting more than 600 hp.

Ford never released official horsepower numbers for it, but in a very rare report to the Society of Automotive Engineers, the single 4V engine cranked out 616 hp on the dyno. Impressive, no? But if you look closely at the dyno chart you'll see the output was still climbing. So how much power did the 427 Cammer really make? And how much did the 8V version make? The number will remain a mystery. But we're pretty sure it made more than the skinny bias-ply tires of the day could possibly keep up with.

Ford's original plan was for the Cammer to be a next-level response to Mopar's 426 Hemi. The SOHC Cammer engine was going to join the 1964 options list in progress, but after a dog-and-pony show at the Rouge plant's engine assembly for NASCAR's founder Bill France, the Cammer was disallowed. NASCAR was troubled by the trend towards increasingly exotic, low-volume engines, and France decided it was time to draw the line. That left Ford with tooling for an incredible engine, and a handful of engines already produced.

A few wound up in drag racing, and a few more showed up in exotic rods and show cars. Once the inventory of Cammers was sold, it was all over. The engines out in the field bounced around among those with pockets and a taste for the exotic.

One of them bounced into this Candy Apple Red '66 Galaxie 500 7-Litre convertible decdes ago. Its early history is, like a lot of cars, fuzzy, but it's been a member of the Cammer club since the 1970s. Unconfirmed word was the car was built at Holman-Moody.

Owner Mike Patak has a thing for the big, high-powered Fords. He bought this 7-Litre pretty much as is. He's owned plenty of once-in-a-lifetime Galaxies, Customs, and XLs, and knows a good one from a great one. Though solid when Mike got it, it needed some freshening up. Mike rolled it in his shop and gave it all new exterior trim, interior, and an engine compartment detailing. The big Ford also got a set of Coy 18x9-inch C5 wheels.

The door tag decode shows it was built at Ford's Louisville plant August 23, 1965, making it a very early '66. Though it was a top-of-the-line 7-Litre with the 428 and four-speed, it had no power-sucking options—no power steering, brakes, windows, and no air conditioning.

When asked about how strong the Cammer runs compared to wedge 427s, he pauses, gets that look on his face, and shakes his head as he searches for the right superlatives. The power is up high in the rev band, above 5,000 rpm. On one hand, you respect the engine's rarity and want to go easy, but on the other hand, it was designed for severe use, and the real power lives up high in the powerband where most mortals fear to tread. The block is the standard side-oiler 427 with cross-bolted mains. It's virtually fail-proof. The heads are works of art, and flow like a river at high rpm. If you've got the guts to stay in the throttle, you'll be rewarded with a level of power unlike anything a normal wedge engine is capable of.

Had the 427 SOHC Cammer made production, there's no telling how the landscape may have changed. Maybe a whole new car would have been designed around the engine. Maybe there would have been no 428 Cobra Jet or Boss 429. Maybe the Cammer would have attracted enough interest to make the fullsize models Ford's premier powerhouse, instead of Mustang.

Who knows what may have happened? Speculation is easy. But had Ford's plans come to fruition, this is what the 427 SOHC option would have looked like—a spectacular way to go big.

Read Mustang & Fords Magazine for a feature on a 7-litre 1966 Ford Galaxie.

Our 2015 ARP/STREET RODDER Road Tour Build, a 1961 Ford Sunliner, is nearing completion just in time for it's June 6th unveil at the NHRA Motorsports Museum.