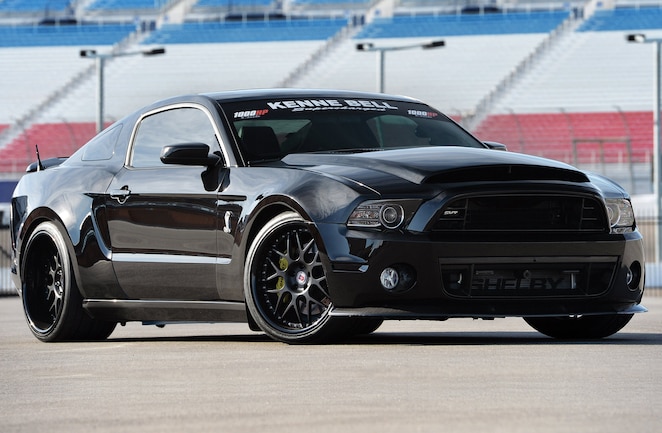 Manny Galvan has a good job. As high-performance vehicle manager at Gaudin Ford in Las Vegas, his days are spent helping customers choose and outfit the Mustang of their dreams and, considering that dealership's proximity to and close ties with Shelby American … well, you can probably see where we're going with this. Manny sells a lot of GT500s—worldwide—and more often than not, they're not entirely stock.

On one level, then, you might think of this hulking widebody '13 GT500 as Manny's "demonstrator," despite belonging to him personally, and not to the dealership. At a glance, you can see that inside, outside, underneath, and underhood, his beastly black coupe encompasses just about every imaginable option or add-on—whether factory, Shelby American, or aftermarket. So it's a handy reference tool when, say, a customer is wondering what his new GT500 might look like wearing a Shelby widebody kit. Or maybe what it would run like with a 1,000 horsepower trying to overwhelm its rear rubber.

But what really prompted Manny's purchase and build of this Trinity-powered GT500 was his realization that this was a piece of history as the last line of Mustangs in which Carroll Shelby had input toward development. Plus, Manny feared that this may well be the last of the truly big-engine Mustangs. For all these reasons, he had to have one.

A polished Kenne Bell provides a nice contrast to the sinister black. Sitting atop a built short-block, it produces 1,090 rwhp on a mild, 91- octane tune. Thus the need for all the tire room opened up by the wide fenders.

Having been in the Ford performance business for many years, Manny has close contacts throughout the Mustang aftermarket, one of whom is Jim Bell, head honcho at Kenne Bell. Manny's was the first '13 GT500 received by Gaudin Ford (in early July 2012), and almost as soon as the title was transferred to Manny, he shipped his factory-fresh Shelby off to Kenne Bell, where it was used as a testbed for the development of KB's potent 3.6-liter, liquid-cooled supercharger kit for the Trinity 5.8. Jim is nothing if not thorough: Manny says his Shelby had racked up about 300 hard miles on the KB dyno by the time he got it back.

At that point, his Trinity's internal organs were stock. Manny opted to take it down the street to Shelby American for teardown and rebuild with the same internals as used in the 1,000hp Super Snake—Carillo rods, JE 9.0:1 pistons, and Comp Cams XER Street Performance cams. Also wearing American Racing long-tube headers, the car now boasts 1,090 hp, and 900 lb-ft at the wheels—and that's on a 91-octane tune. On the street-worthy Nitto Invos shown in our tech specs, the coupe has run a 9.5-second quarter-mile at 132.3 mph.

Shelby also used Manny's car to finalize fitment of its handsome full widebody kit. Manny, by the way, says that $6,000 Shelby widebody kit is "an easy sell" as a necessary traction aid for those customers who choose to go beyond the GT500's factory 662 hp, as it permits much needed 345-width rear skins. And what better way to finish off the widebody kit than with a Super Snake hood and Shelby carbon-fiber splitter, all accented with Seibon carbon-fiber grille inserts, trunklid, rear valance, and license-plate surround? The all-consuming blackness carries right on down to the 20-inch HRE 590RS rims.

Clearly, its power, handling, and looks are top notch, but Manny also likes his cars to be a comfortable and entertaining place in which to spend some time. His GT500 came utterly loaded from the factory with Track Pack, SVT Performance package, glass roof, navigation, Recaro seating, and Shaker Pro audio, but Manny figured that was just a good starting point.

The cabin is an upscale place, as befitting a $200,000 ride. Details include piano-black finishes, a carbon-fiber console lid, and Alcantara headliner, visors, and door inserts. Gaudin Ford even converted the Recaros to power operation. Having been in the Ford performance business for many years, Manny has close contacts throughout the Mustang aftermarket, one of whom is Jim Bell, head honcho at Kenne Bell.

The Gaudin Ford service crew adapted his Recaro buckets to power operation—not a bad thing considering all the people who want to "try on" his demonstrator for fit. Manny then strung Sparco four-point harnesses to a pale blue Don Richardson seatbelt-harness bar (which in less litigious times might have been called a rollbar), and added Auto Meter Cobalt gauges in an A-pillar pod now skinned in Alcantara, just like the door trim inserts.

ICE comes primarily by way of JL Audio, including HD 1200/1 and HD 400/4 amps and 12-inch W7 subwoofer, but for all other speaker drivers, Manny went with the unabashedly pricey Focal Utopia line out of France. With that gear onboard, it probably now sounds almost as good on the inside as it looks on the outside.

Through business and pleasure, Manny has managed to amass over 13,000 miles on the odometer, yet his maxed-out GT500 was still sufficiently pristine to be featured—and well received—at the last SEMA show. The good news is, Manny will happily duplicate it for any interested takers, though he figures the tab would likely run close to $200,000. Hey, it's only money.

Gaudin Ford in Las Vegas has a broad customer base. Manny says only about two percent of his Shelby sales are local to the Las Vegas area. The rest are spread over the planet.