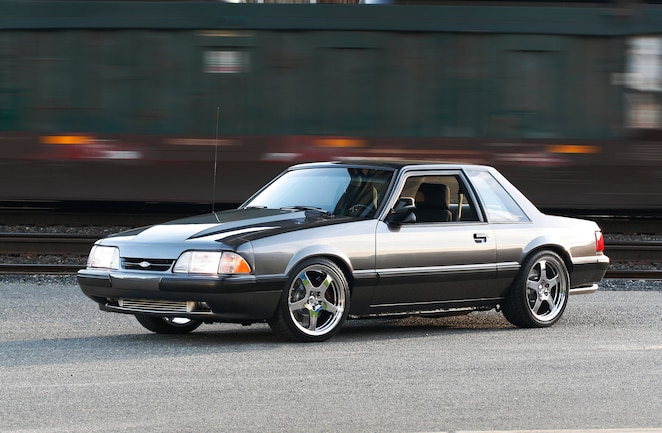 Historically speaking, hot rodders and cops aren't always on the same wavelength, though it's the extremists in each group that generate the bulk of mistrust and misunderstandings. Regardless, an appreciation for fast cars is a common trait of all—but for different reasons.

Hot rodders most often loved the cop-engine option, but not so much the stereotypical four-door bodystyles they came in. All that changed when the Mustang Special Service Package came along during 1982-1993—it was a complete package that everyone appreciated. Officers who spent time in SSP Mustangs often relate them as being the best pursuit vehicles they ever experienced, and yes, the cars look cool as well.

Retired SSP Mustangs are favorites for those looking to build a high-performance Fox. Price, light weight, a stiffer notchback unibody, and several other durability mods seem to serve the enthusiast as well as they did law enforcement agencies. For example, Hardeep Mahil's '90 ex-California Highway Patrol car. It had already been restored as a sweet street machine when Hardeep bought it in 2010, but its evolution has continued.

Hardeep is an enthusiast who well remembers riding in friends' Fox Mustangs when he was in high school, and yet he never owned one until the Mineral Gray beauty before you. Hardeep had even pedaled his brother's '92 LX on a regular basis, but for some reason, his personal choices included a Camaro, Corvette, BMW, Porsche, and '95 Mustang 'vert. After a few years away from the car scene fulfilling family obligations, Hardeep found himself in hot pursuit of a quality Fox—brought on when his brother sparked a renewed interest via a newly purchased '93.

Hardeep looked months before locating this particular car in California. His home near Vancouver, British Columbia, Canada, dictated relying on the former owner's honesty and a host of pictures. Fortunately, all was as advertised, and Hardeep found himself with a car that already had much of the hard work done—and the fun yet to come. The body, paint, interior, and trim had all been nicely refinished, with specific speed parts to be determined. Truthfully, the '90 already had a strong little 302 and 17-inch rolling stock, and was a car Hardeep could've enjoyed as is. Yet what has happened since the purchase is utterly predictable…

Just like the exterior, the interior looks primarily factory, with a few important upgrades. Chief among them are the Corbeau buckets, along with Auto Meter and AEM monitoring of the fuel pressure, oil pressure, water temp, boost, and air/fuel ratio.

We'll dispense with the blow by blow of how Hardeep's '90 morphed into what you see today, but several shops and friends had a hand in it over the last three years—including Jawanda Motorsports, Steve Black, and Dustin Morse. The end result is something that caught our eyes and ears, with the feature piece being a stout turbocharged 327-inch Windsor.

We've discovered that in British Columbia, turbos and Fox Mustangs seem to go together much like peanut butter and jelly. Any number of such combinations have been featured on our pages in the last few years, with all executed near flawlessly. Hardeep's is the latest, but certainly not the least. When he decided to step up to the turbo system in 2012, Hardeep knew his short-block from a previous supercharger combination would need attention.

He found a stillborn project powerplant through a friend; while it was a bit overkill for the street, the price was far more reasonable than if purchasing the same items from scratch. Ron's Engine and Machine did a thorough tear-down and reassembly to assure all was as it should be, with the results being an engine that will withstand all the boost Hardeep could reasonably throw at it—currently a modest 13 psi. The 327-inch Windsor is built on a Ford Motorsport A4 block foundation, and filled with a neutral-balance forged Eagle crank, billet Lunati rods, and fully prepped JE blower pistons. Contributing to deep breathing are AFR 195 Renegade heads, an Edelbrock Victor Junior intake, and a custom Ed Curtis blower cam.

Hardeep’s ’90 is clearly as much a show car as it is a go car, with both sides of the equation getting plenty of attention.

As Hardeep headed for the finish line with the buildup, he realized just having a killer engine wasn't going to be enough—it had to look good too. Of course that sentiment means different things to different people, but in Hardeep's case, it pretty well means the full monty of time, money, and effort. Dustin Morse took on the tedious job of filling the myriad holes in the engine compartment, spraying a fresh coat of topcoat-worthy paint, and hiding the bulky wiring during a complete rewire. On top of that, just about everything that bolts to the engine compartment got a full shine—either polish, metallic ceramic, or chrome. No shortage of bling to say the least.

Compared to the underhood view, the rest of Hardeep's notch appears rather conservative—visually, just a 2-inch cowl hood and Roush wheels deviate from stock. Nevertheless, the hidden shortcomings typical of a '90 have also been addressed, and Hardeep has now arrived with his own version of the ultimate Fox Mustang.

Consider it fully transformed from a former life in law enforcement, and yet we know this one isn't destined for a street-racing dark side. No, so far Hardeep is satisfied with weekend drives and car shows, though we have to think he'll eventually be drawn to a track venue suitable for a full workout. After all, isn't that where Fox Mustangs shine the brightest?

SSP Mustangs often had the manual locks and crank windows seen on Hardeep's '90, but it did vary by jurisdiction, with some specifying power. Outside of the SSP cars, however, power locks and windows were the norm for a 5.0 Mustang by 1990.