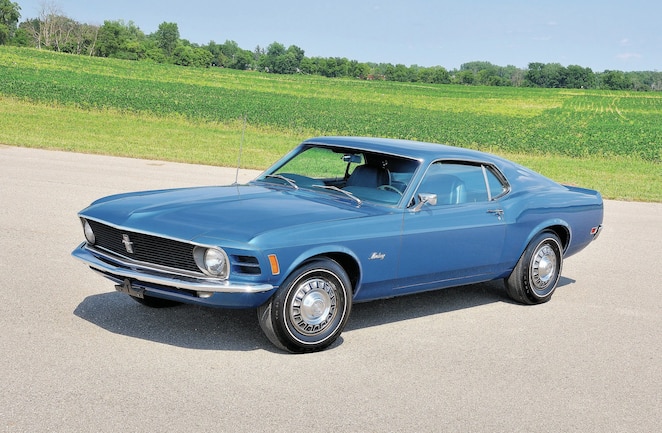 Stroll today’s Mustang shows and you’d never suspect that Ford built a ’70 SportsRoof that wasn’t a Shelby, Boss, or Mach 1. But, in fact, according to Kevin Marti’s Mustang…By the Numbers book based on Ford’s production database, nearly half of the almost 90,000 SportsRoofs built for ’70 were no-frills models. For the most part, they were driven hard, then put out to pasture in junkyards at the end of their useful life. We rarely see them today.

Except for Joe Fedullo, who can stroll out to his Michigan storage barn ay any time to view his 44,000-mile SportsRoof survivor, a ’70 Mustang that was purchased new for his mother in the summer of 1969 and maintained flawlessly by his car-fanatic father. Joe has known the Mustang all his life. “My parents ordered it from Robin Ford in Staten Island, New York, before the ’70 models came out,” Joe explains. “The brochures for the ’70s weren’t even available yet, but the salesman assured my parents that they would be more or less the same as the ’69s. My mom wanted a Mach 1, but Dad didn’t like the flat black hood and hood pins on the ’69s so they ordered a standard SportsRoof.”

Even though the 302-powered Mustang wasn’t a Mach 1, the Fedullos checked off the order sheet with nice options, including disc brakes, power steering, Competition Suspension with F70x14 tires, air-conditioning, tinted windows, a clock, and even a Traction-Lok differential. According to Joe, his mother, Aileen, “babied” her Bright Blue Metallic Mustang until 1984 when she considered selling it. An eight year-old Joe intervened. “I asked if they would keep it for me,” Joe says. “It was the first car my parents had bought new so my dad didn’t really want to sell it. He set it up for long-term storage in our garage until I turned 17.”

No Rim-Blow, tach, or a four-speed inside either, but Joe’s parents did check off all of the comfort/convenience options on the order sheet that make this SportsRoof a great cruiser.

Even as a teenager with his first car, Joe pampered the ’70 Mustang. Not wanting to subject it to the harsh northeast winters, he bought a ’88 Cougar as his daily-driver. When Joe moved to Detroit for college and a career in the automotive industry, the Mustang went with him, the only time it has ever seen a trailer. Less than 1,000 miles have been added to the odometer since he took possession in 1984.

“The car is really original,” says Joe, who currently works in General Motors’ Advanced Vehicle Dynamics department while his wife, Hether, works for Ford SVT. “The history is extremely well documented because my dad saved everything associated with the car. We have the original window sticker, the build sheet, almost every registration card since 1970, NYC inspection results, the bill for every service, and even the handwritten notes from 1969 when my dad priced it at Robin Ford.”

His father also kept most of the maintenance items that were replaced over the years—the water pump, radiator hoses, oil pressure sending unit, fuel pump, spark plugs and points, ignition wires, belts, and front brake pads. Joe displays the original parts at shows, noting that many of them could be reused.

“My dad also saved the Ford ‘Tot Guard’ baby seat and the box it came in,” Joe adds. “It was used for my sister and me.”

The spare tire is the original, with Joe noting that the air in it is from 1969.

At shows details like the paint daubs on the spare rim in the trunk are what catch purist’s eyes and out come the cameras to capture said details for their own restorations.
Under hood the SportsRoof shows a bit of its true age, but the 302 has less than 50K on it and runs like new. What more can you ask for from a survivor right?

Although in the past the Fedullos had driven the SportsRoof to the occasional dinner or local car group gathering, it wasn’t until last year that Hether challenged Joe to get the unrestored Mustang prepared for more driving and show activities. “She set a deadline of having it ready to go by the Mustang Memories car show,” says Joe, referring to the Mustang Owner’s Club of Southeastern Michigan’s annual August event at Ford World Headquarters. “It had not been started in a few years, so getting it going became a family affair. My younger brother had just moved to Michigan to start work at Ford, so between him, my wife, me, and a few weekends, we made the deadline to clean and prep the car for its first car show in over 20 years.”

The group effort replaced a fuel float in the carburetor, cleaned rust out of the fuel tank, patched some holes in the original exhaust system, changed fluids, and replaced the battery. The 302 fired right up for the 100-mile round-trip to World Headquarters, where Mustang Memories attendees marveled to witness a survivor ’70 SportsRoof.

“Some have trouble believing that the car is all-original,” says Joe. “For the average person, it is impressive that the paint looks so good after 43 years. When people who know Mustangs look at it, they start taking pictures of the chalk marks and paint dots.”

From the rear you’d be expecting a spoiler, window slats and perhaps some Mach or Boss graphics, but the ’69-’70 SportsRoof’s styling stands up quite well on its own we think.