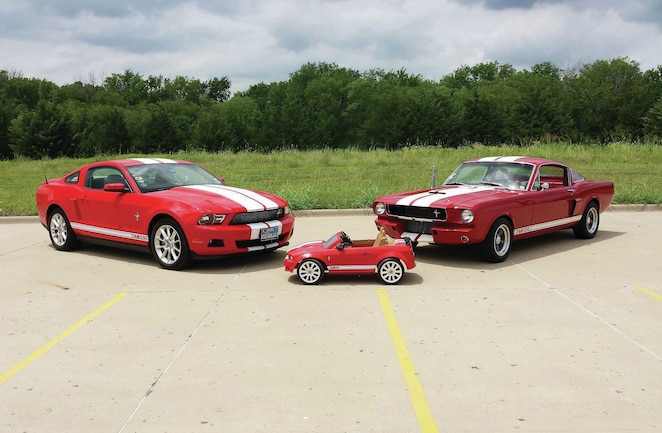 His and Hers GTs

Jim and Barb Dinning each have a Mustang GT—albeit they're 30 years apart in age. Jim's Yellow Blaze '12 GT sports a few styling upgrades and 11,000 miles, while his wife's '82 GT features T-tops and a scant 29,000 miles on the odometer. This is Jim's seventh Mustang but Barb's first. Both cars were driven from their Columbus, OH home to Pittsburgh, PA for the Pittsburgh Vintage Grand Prix in July of 2012, where the Mustang was the marquee vehicle. As members of the Mustang Club of Ohio they are looking forward to hosting the MCA Grand National in 2015.

Oh, What a Feeling!

It's not often you spot a Mustang in Europe, but Thierry Feller from Luxembourg spotted this '09 GT in a Toyota dealership in Germany, just an hour's drive from his home. Found via the Internet, Thierry knew he would buy it the moment the salesman started the engine inside the showroom! To date Theirry has added a K&N cold air induction kit and an axle-back Flowmaster muffler kit. "The sound is just amazing! I love this car. People in the streets are turning their heads and everybody tells me that I have a beautiful car!" Indeed you do Thierry.

Having admired his neighbor's '66 Mustang for several years, Edward Frischkorn asked his neighbor to let him know if they ever decided to sell the car. That realization came to be on Father's day a few years ago and now Edward and his whole family are enjoying the Metuchen built car and working on it together. So far the hardtop has taken seven awards at shows to date and will have made the trek to Charlotte for the 50th.

Mike Yudizky got quite the surprise under his Christmas tree back in 2006 when his wife Annette somehow managed to fit a '65 Mustang fastback down the chimney. Since getting the best Christmas present ever Mike has added a 347 stroker under hood backed by a T-5 five-speed manual and a 9-inch rear. Mike picked up the '11 V-6 for a daily driver while his grandkids are the envy of the block every time they take their custom Power Wheels Mustang for a spin.