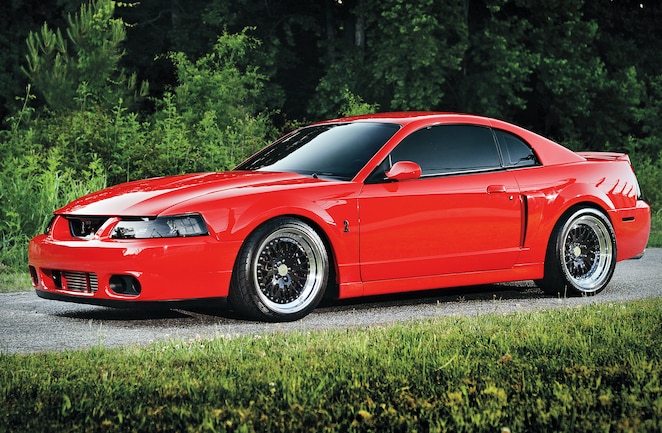 You can pretty much break down Mustang owners into two groups. Those that own a ‘03-'04 Cobra, and those that wish they did. At the time of its debut, the '03-'04 Cobra, codenamed Terminator, was by far the baddest Mustang to ever leave Ford headquarters—by a long shot.

Packing a Four-Valve engine with an iron block, a forged crank, Manley forged connecting rods and forged pistons, and topped off by an Eaton M112 supercharger providing 8 pounds of boost, the Terminator put out 390 flywheel horsepower. Back all that with a Tremec T-56 and an independent rear suspension, and we didn't know what to do with ourselves.

Even though most of us didn't care to have the IRS as part of the package, owners still flogged them at the track as soon as they hit the streets in mid-2002. At Cecil County Dragway on a nice, cool fall day, your grandmother could have run 12.40s with just an after-cat exhaust.

A legend was born.

It is still going strong today, even though current headlining models far surpass the Terminator's output. You never forget your first taste of boost. Up until the '03 Cobra there wasn't anything with the torque, the forged internals, or the power potential. The rpm, the blower whine, the power gains from simple mods—the sky was the limit if you owned one.

T. C. Gordy of Germantown, North Carolina, is one such Mustang enthusiast who has taken his '03 Cobra's mods straight to the sky. It all started in August 2010, when T. C. purchased his Cobra as a daily driver. He quickly learned that wouldn't be the case.

"I said to myself, ‘No way I can daily drive an '03-'04 Cobra,'" T. C. said. Even though the car was mostly stock, with just the basic pulley, exhaust, CAI, and tune upgrades, the Cobra put down 460 horsepower at the feet.

Custom touches abound under the Cobra’s hood, where there’s the perfect mix of show and go. First off, a ProCharger F-1A supercharger combined with a Proline Racing Engine’s Four-Valve on E85 is a wicked combination. However, T. C. had Exotics Inc. powdercoat many underhood components to add the detail and cleanliness he was looking for with the project. To further clean up the engine compartment, T. C. added a MMR coolant crossover delete kit and an HPP aluminum coolant tank.

Of course, 460 horsepower at the feet is more fun than a barrel of monkeys, but if that's fun, how much more fun would a couple hundred more ponies be? Once T. C. saw Whipple's 2.9-liter supercharger, he had to get one. And not only did he add the Whipple, he paired it with E85 with astonishing results. The car went from 460 up to 722 horsepower at the wheels. Now that's fun! "Loved it—a fun car," T. C. says.

While perusing SVTPerformance.com one day, he ran across another ‘03 Cobra with a ProCharger F-1A, this one black with low miles. The car had a Proline engine on E85, a T56 Magnum transmission, and a fully built suspension. "Hmmm, this sounds good," he said. He was thinking he could get the black Cobra, add his existing CCWs, and have it looking awesome while giving him a change from the red car. So he bought the black Cobra, and brought it home. Alas, the spark wasn't there with the black car like it was for the red car. "Everyone knew me for the red car, and it just didn't seem right," he adds.

T. C. decided to tear down both cars and add the stuff he fell in love with on the black car to his true red love. Justin Tolbert, owner of CT Moto in Rural Hall, North Carolina, completely disassembled both cars, and the two transferred the complete drivetrain, suspension, and desired interior pieces from the black car to the red car.

T. C. also cleaned and detailed every inch of the red car while it was apart, and he had Exotics Inc. in Kerners-ville, North Carolina, powdercoat several engine components before dropping it into the red car. Exotics Inc. also refinished the red car's front clip to make sure it was as nice as the car's engine compartment, before the whole car was sanded and buffed to get ready for its close-up.

The attention to detail under the hood spread over to the Cobra’s interior, as well. The seats are from Arizen, but covered to match the stock ’03 Cobra upholstery. The Cobra boasts a Scott Rod Fabrication rear-seat delete, a custom steering column dual gauge pod, and an Auto Meter instrument cluster pod; all filled with Auto Meter, Aeroforce, and Innovate wideband gauges.

As if a cogged ProCharger F-1A isn't wild enough, T. C. wanted a red Cobra like no one had ever seen before. "Everyone knows how OCD I am about cleanliness and looks, I wanted your eyes to be able to look over the entire engine bay and have a smooth transition," T. C. says. This is the reason the radiator cover was sanded and painted body color so the engine compartment would be tied together instead of the black vinyl breaking it up. We'd say that mission was accomplished under the hood.

Even though looking good is better than feeling good, T. C. wanted the Cobra to make huge power, as well. To that end, he took the Cobra over to Kurgan Motorsports so Bob Kurgan could do his thing on the car. Bob's tuning enabled the Cobra to rock the dyno to the tune of 840 horsepower and 650 lb-ft of torque at 22 pounds of boost and 21 degrees of timing, on E85 of course, so Tim's Cobra definitely lives up to its name: Kornfed.