Steve Biafora knew his GT 500 fastback’s history as a Shelby American engineering car, but it wasn’t until he sent it out for restoration that he learned the rest of the story 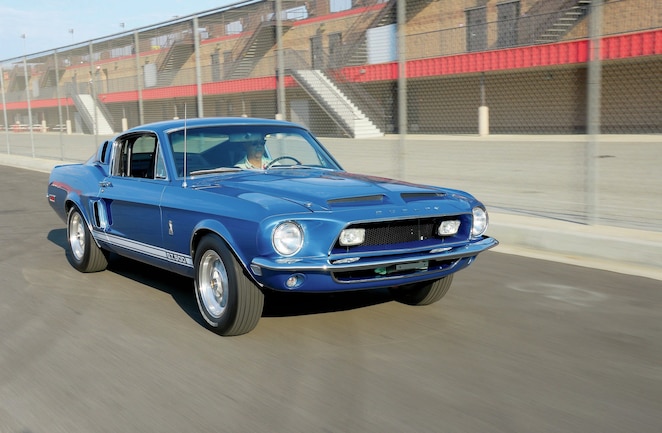 In 2006, Steve Biafora and good friend Wayne Lewellen sold a white-with-blue-stripes '67 Shelby GT 500 at the Barrett-Jackson auction in Palm Beach, Florida. But before the auction ended that day, they had bought another one, also white with blue stripes. "I met the seller in the staging lanes and he told me that it had been a Shelby American engineering car," explains Biafora. "Wayne wanted to know why we should buy basically the same car, but I told him that the history made this one a more interesting car."

The early history of Shelby VIN 67401F7A00463, as confirmed in the 2011 edition of The Shelby Registry from the Shelby American Automobile Club, certainly made it a worthwhile purchase. According to its lengthy listing in the Registry, the Lime Gold GT 500 was released to Shelby American's engineering department on February 3, 1967, for use as a factory test car. As such, 00463 was shipped, along with the well-known 427 Super Snake GT 500, to Goodyear's test track in Texas. The Super Snake famously reached speeds of 170 mph while evaluating Goodyear's new Thunderbolt tires. The following day, 00463 underwent "cooling tests" to evaluate the effectiveness of a louvered hood, outboard driving lights, and oil cooler to solve overheating problems on GT 500s with air conditioning.

After their purchase, Biafora and Lewellen had the GT 500 repainted in its original Lime Gold and tried running it through another auction, but the sale did not end well and the pair of golfing buddies maintained their ownership of the car. "That turned out to be a blessing," Biafora says. "If we had sold the car, more than likely the rest of its history would still be lost." But the Shelby was the last thing on their minds when Lewellen learned that he had cancer. Sadly, he passed away in 2009. 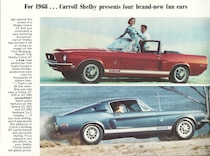 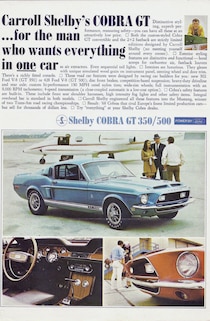 As a dedication to his friend, Biafora decided to have the Shelby restored right. After extensive research, he settled on Legendary Motorcar Company in Ontario, Canada. "Legendary kept popping up in my research," Biafora says. "I saw pictures of their restorations and noticed that they do a really nice job. So I called them out of the blue and said I wanted to ship my Shelby to them."

Biafora shipped the Shelby from Los Angeles to Canada in 2010 for a restoration as a '67 GT 500. But just as Legendary was preparing the body for its Lime Gold paint, the course of 00463's restoration took an abrupt turn. "We got a call from Shelby American Automobile Club registrar Peter Disher," says Chris Simon from Legendary Motorcar. "He and Dave Mathews were trying to locate the Acapulco Blue '68 fastback that was used in Shelby advertising and promotional material. Because this car had been in Shelby American's possession during the spring of 1967, and because it had a rear window defogger like the fastback in the old photos, Disher asked me to look the car over to see if I could find Acapulco Blue overspray."

Simon found it underneath the rear package tray. Then he began noticing signs that the car had once been dressed as a '68 Shelby: holes in the radiator support for the hood twist-downs, extra holes in the transmission tunnel for the console, and leaded-in rear quarter panel reflector areas.

The restoration was immediately put on hold for more research. With help from Disher and Mathews, plus invaluable research already done by Brian Styles, owner of the '67 convertible that was updated to a '68 Shelby for promotional activities (see "Rare Air" in the June 2012 issue), Simon was able to nail down the car's previous service as the prototype and photo car for the '68 Shelby fastback.

So not only had 00463 been used as a '67 Shelby engineering test car, its ownership by Shelby American made it the logical in-house vehicle for updating to a '68 Shelby. As with the '68 convertible prototype, many of the parts were fabricated, like the one-piece nose and instrument panel knee pad that's thicker than the production '68 Mustang piece. Some '67 parts, like the radio and vent windows, were not changed. The fastback was repainted in Acapulco Blue to show off the new '68 color.

Along with the convertible, the '68 Shelby fastback was photographed extensively for magazine advertising and promotional brochures, using either '68 hubcaps or '67-style 10-spoke wheels, and even retouched with "GT 350" in the stripes. The two cars also appeared at Ford's July 1967 press preview at Riverside Raceway in California. Photos taken that day provided a number of clues that confirmed 00463's use, primarily the four-speed transmission and, perhaps most importantly, the rare rear window defogger. 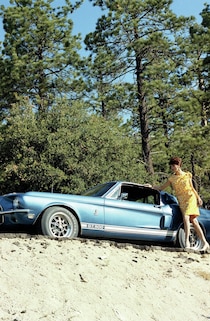 So Biafora faced a dilemma. Should the fastback be restored as a Lime Gold '67 Shelby GT 500, as it was utilized during its time as an engineering department test vehicle? Or should the restoration take the car back to its days as an Acapulco Blue '68 Shelby GT 500 promotional model? Biafora eventually settled on the latter, pinpointing the exact day that the Shelby appeared at the Riverside press preview.

After a year's delay for research and confirmation, Legendary resumed the restoration with the added challenge of reproducing many of the fabricated '68 parts, like the one-piece nose. "We had to mock it up, pull it off, and make a mold so we could cast it as a one-piece," explains Simon. "The hood was unique because it had a steel frame, which was really bizarre for a '68, and the louvers weren't functional, just stuffed with tape to give the illusion. We also had to fabricate the one-piece trim that goes around the nose and the prototype emblems for the steering wheel and instrument panel."

With time-out for research, the restoration of 00463 eventually took three years, with Legendary Motorcar Company completing the project in 2013, just in time to deliver the blue fastback to last summer's SAAC-38 where it joined Styles' restored convertible for a reunion of the '68 Shelby prototypes. "I'm just sorry that Wayne is not here to see it," says Biafora. "He never even knew the second part of the car's history."