AmericanMuscle.com thrusts its Fox project into the 11s with boost

If you want more info on the American Muscle Fox, check out the landing page the company created on its site www.americanmuscle.com/1993-gt-foxbody-project-car.html. There you can find a full parts list and videos on the build.

One of the most popular Foxes ever built was also one of the last—the ’93 Cobra. The first SVT Mustang not only brought better performance, but it carried with it a fresh spin on the Fox look.

One such group is AmericanMuscle.com. When the company decided to make a stronger push into the Fox world, it needed a project car—and a theme for the build. A Cobra-clone convertible quickly became the answer. With that mission in mind, AM rescued a ’93 Mustang GT convertible from years of neglect. 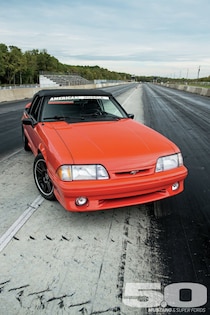 “Well, you know the customers are always ‘vocal’ with certain aspects of our project cars. And in the Fox-body’s case, the common theme was: ‘Really? A convertible?’,” says Justin Dugan, video host and automotive writer at American Muscle. “So we kind of had the deck stacked against us a little from the start. But I think once people saw where we were going with the build, and the fact that we were trying to stay true to the original Cobra in every way possible, people started getting on board. Ultimately, when we showed our customers the results of our fourth and final stage, everybody seemed to be pretty stoked on the old ’vert and its capabilities.”

In their day, Fox convertibles never had the street cred of their coupe and hatch comrades, but they still had that same performance DNA inside the flexi-flyer chassis. As such, the idea of bringing a well-worn droptop with an injection of snake venom seemed like a good idea. It was such a good idea, that we covered the car’s evolution on these pages.

Back when we covered the early stages, we talked to Shane Lesky, social media representative at AmericanMuscle. As Shane told us, “We knew what we wanted to build, so we went hunting for a convertible that was in need of a little TLC. This particular ’vert needed a lot of work! With our inventory of Fox resto parts, we had a blast putting in new switches, actuators, weatherstripping, interior panels and carpet, convertible top, and more. The little things often go unnoticed when you’re building your Fox, but we wanted a showroom-quality restoration. Hopefully Fox owners enjoyed the project and think we hit our goal of building the Cobra that should have been!”

To make the convertible track-worthy, it picked up a four-point rollcage and a pair of Corbeau cam-lock five-point harnessbelts. They give the restored interior a more purposeful look and add a reassuring level of safety.

To that end, the AM crew took to bringing the convertible back from the brink. That process began with a basic engine tune-up, an upgraded cooling system, and some fresh body parts, like fenders and Cobra body bits. It was also in need of a new clutch, so they put in a fresh Exedy unit. Naturally all these parts came right off the shelves at American Muscle headquarters.

“Stage 1 and 2 made a huge impact on the reliability of the car. It’s amazing what some spark plugs and wires will do! We were able to get the car running smoother and cooler than ever before, with over 100,000 miles on the odometer,” Shane said at that point in the project. “After that, the Cobra appearance really started to progress. New wheels and tires, a Cobra body kit, OE-style headlights, and we were feeling better about the car after it came back from paint. Obviously, with a fresh paint job came the need for a ton of resto parts to complement it...”

The AM Team freshened the car with a new convertible top, carpet, and numerous pieces of trim and weatherstripping. These combined with the new Competition Orange paint gave the car a whole new lease on life. It really was a night and day difference over the previous faded black paint.

“In Stage 3, it was time to install some much-needed performance mods. Up until this point, we had fully restored our nearly destroyed ’93 convertible back to showroom quality,” Shane added. “We were trying to build the car that Ford never made ... a ’93 Cobra convertible. With all of our Cobra styling additions, it was only right that it had the power to back it up!”

The bulk of this era of the project centered on a heads/cam/intake upgrade based on Ford Racing Performance Parts gear. Rounding out the HCI was supported by BBK exhaust components and a Flowmaster after-cat. The gains were quite impressive, as the car picked up over 100 rear-wheel horsepower.

It is a classic combo—a GT-40-spec 5.0-liter topped off by a Vortech supercharger. The car was tuned by Bama Tuning and uses MSD’s trick Power Grid for a completely laptop-programmable ignition curve.

Those mods made the car a lot more fun, but when you are having that much fun, why stop at just three stages? Adding that fourth stage to this rocket ride called for some extra boost. That came in the form of a Vortech supercharger and the necessary support hardware, including a bigger SCT mass air, Aeromotive fuel rails, and even a stouter alternator from PA Performance.

“Oh, the car definitely met and exceeded expectations, performance wise! When we first started the project, I don’t think we had a clear idea of what we wanted for the final power-adder stage. We had the first three stages mapped out pretty well, but the fourth stage was a bit of an afterthought at the time,” Justin explained. “We knew we wanted to try and replicate the ’93 Cobra’s power plant as much as possible with the heads, intake, and cam, but that was pretty much the extent of the plans. It wasn’t until a few months after the build was completed that we ultimately decided to bolt up the Vortech and go for some big power...”

They were able to make impressive power, and even put the car deep into the 11-second zone to end the project on a high note. While this is the final official stage of the project, we know these cars are never really done. The AM crew wants to keep having fun with this resurrected Fox and see just how well a convertible “Cobra” can perform.

“...We honestly want to push the limits of the T5 and the stock block and see what we can pull out of the ’ole girl. I’m thinking with the right air and a sticky track a high 10 wouldn’t be impossible, as long as everything holds together,” Justin concluded. “The boys at Bama did a hell of a job with the tune. It’s just a matter and seeing how much more abuse that transmission is willing to take before it gets upset with us. Either way, we’re just going to continue to have a fun with the car and do what we do best, try to make it even faster!”