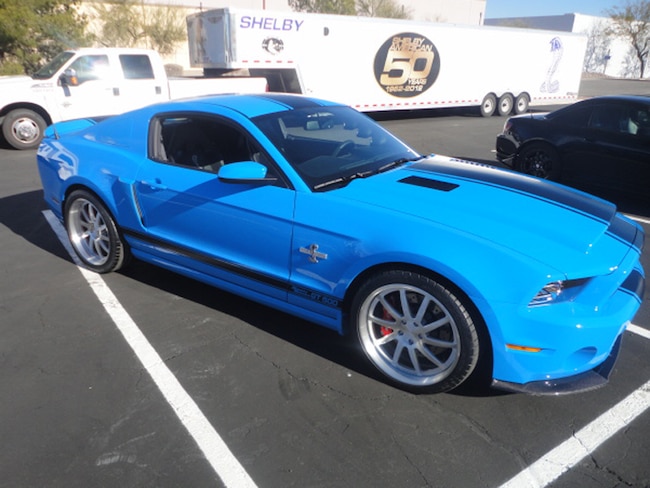 Shelby American, a wholly-owned subsidiary of Carroll Shelby International, is holding down a new location in the heart of Las Vegas. Starting off with a bang, the first very first car to roll off of the assembly line was a 2014 Grabber Blue Shelby GT500 Super Snake belonging to Carroll Hall Shelby Trust. With a stout 850hp, the attention-grabbing beauty (chassis #14SS0010) was delivered on December 26, 2013 to the new Shelby Automotive Museum in SoCal.

“The 2014 Ford Shelby GT500 Super Snake represents one of the greatest collaborations between Carroll Shelby, Shelby American and Ford Motor Company,” said Neil Cummings, co-Trustee of the Carroll Hall Shelby Trust. “Placing this particular car in the new Carroll Shelby Automotive Museum by Carroll’s trust will symbolize that strong relationship, as well as remind the public that the organizations he founded are still influencing the world.” Established by the late and great man himself, the Carroll Shelby Automotive Museum is a 501© non-profit organization built with the purpose of educating the public about the auto industry and, of course, the high-performance Shelby American-built cars dating all the way back to 1962. Starting with the very first Cobra (CSX2000) to the current Shelby powerhouses, the museum pays tribute to the man and the legacy that he created.

...it’s fitting that the first car off our new factory line would be for Carroll's Trust.

“Many consider the 2014 Ford Shelby GT500 Super Snake to be the pinnacle of the outgoing solid axle Mustang line,” said Joe Conway, CEO of Shelby American. “Carroll was very proud of its breathtaking performance, which was developed after Ford upped the GT500’s capabilities in 2012. Since he was personally involved with both the pre-title GT500 and post-title Super Snake package, it’s fitting that the first car off our new factory line would be for Carroll’s Trust.”

For most Mustang and Shelby enthusiasts, a Super Snake is a gem in the world of high-performance American cars with the post-title package starting at $28,995 for 662hp and $39,995 for the optional supercharger package bumping the power up to a staggering 850 horses. These prices do not reflect the price of the base car, but it does include transforming the base car into a beast with enhanced performance, brakes, engine, and cosmetic upgrades.

Back in 2013, the ’13 Shelby GT500 Super Snake was put to the test on the quarter-mile through a third-party and laid down a 10.66-second run on optional Nitto NT555R street tires. With 850hp under the hood, the car kept in the mid ten-second range consistently through multiple runs. Not too shabby for a 50-state street legal pony, compliant with all emission laws.

Just a limited number of 500 will be built with all of them born at the Shelby American headquarters in Vegas. Each car will come with official documentation as well as a unique number logged into the Shelby Registry. If interested in building your own, visit http://shelbyamerican.com/buildhome.asp. Feel free to contact Shelby American sales department at 702/942-7325 or hit up www.shelbyamerican.com.

My Take On Technology - Power Shiftin'

Over time I have come to appreciate technology in today's vehicle components. In this month's Power Shiftin', I give you my take on technology in Ford Mustangs.

Check out the April 2014 edition of Yo Ken!, where our readers send in their technical questions and Ken Miele answers them! Ken helps out a reader with his 2014 Shelby GT500 and more! "Should I do any fuel system upgrades, such as a Kenne Bell Boost-a-Pump?"

Check out Steeda's 2014 Ford Shelby GT500 widebody prototype! The Steeda widebody is a full 6 inches wider than stock up front, and no less than 7 inches broader out back. Each handcrafted vehicle will be listed in the Steeda Registry as a Limited Edition Steeda widebody conversion.

Starting off with a bang, the first very first car to roll off of the assembly line at Shelby American's Las Vegas location was this 2014 Grabber Blue Shelby GT500 Super Snake. With a stout 850hp, this beauty was delivered on December 26, 2013 to the new Shelby Automotive Museum in SoCal.