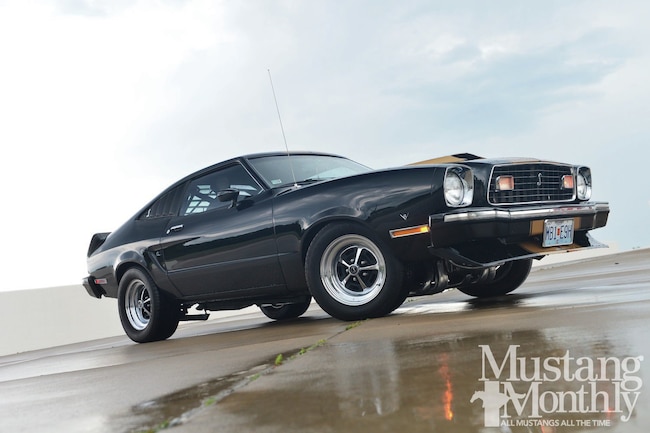 “It just didn’t have enough hump to it.”

So, in 1988, Morrow finally worked up the enthusiasm to “make it the way Ford should have.” That year, a buddy found a Boss 302 crate engine for sale and Morrow was the lucky buyer. Now he had a high-performance engine for his original-owner Cobra II. Morrow added, “I started tearing into that car.”

His tone of voice sounded like he was correcting the ills of a generation past and at the same time relieving his own Cobra II angst of so many years.

But why didn’t Morrow sell the Cobra II so he could buy a later generation Mustang with more performance? Morrow explained, “It’s my first new car. I’m going to keep it.”

So instead of selling the “II,” Morrow tried his best to build his Gen 2 Mustang the way he feels Ford should have to begin with.

The car had “no power,” Morrow said, as he recalled the 136 horsepower for the factory two-barrel 302 V-8. His Cobra II did come from the factory with a four-speed manual transmission, but the rear axle gears were an open set of 3.08s, clearly not enough to launch the Cobra II to respectable quarter-mile ETs.

So Morrow pulled the factory 302 and replaced it with the high-revving Boss 302, which is secured by an engine plate. A Cobra-style air cleaner from Tony Branda Performance hides the 750-cfm Holley four-barrel on a factory Boss 302 aluminum intake manifold. The original four-speed and rear axle were deemed too weak to handle Boss power, so the Gladstone, Missouri, Mustang enthusiast chose a Tremec five-speed backed by a Currie 9-inch rear end fitted with a set of digger 3.87:1 gears.

Morrow chose not to disturb the original black and gold paint or the body, other than adding a ’69 Mustang hood scoop. He believes, as do many other Mustang II enthusiasts, that the Cobra II carries a fairly strong set of performance graphics with the stripes that resemble the original Shelby Mustangs. These enthusiasts believe the “II” just lacked the performance of the 1960s originals.

Morrow replaced the original four-lug, 13-inch wheels with a set of 15x7 Magnum 500s, noting that, “The five-lug spindles bolted right on.” They provide the wheel wells with a fuller look and a larger set of tires to go along with the increased horsepower.

Like the Cobra II’s exterior, the Dearborn-stock interior looks great so most of Morrow’s interior remains stock—seats, upholstery, console, and door panels. However, Morrow customized the dash with a new aluminum panel, designed to house a set of white-face AutoMeter gauges. Of course, the Tremec shifter is another upgrade. Morrow also replaced the stock steering wheel with a LeCarra four-spoke Mark IX.

Even after the modifications, Morrow told us, “I’ve never raced it. I don’t know what the car will do on the drag strip.”

Morrow’s consolation, and apparently his main goal, is that he corrected the low performance of his first new car. He made his Cobra II correction and feels much better now.

Farrah Fawcett and the other ladies weren’t the only hotties on Charlie’s Angels. Take a look at this 1976 Ford Mustang.