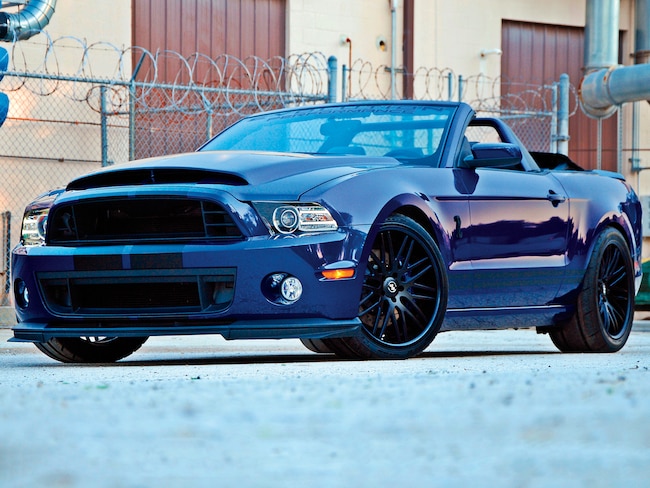 Even those most dedicated to their work will allow themselves some enjoyment from a hobby or passion. Dedicated might be an understated way to describe Dr. Kim Hammond's passion for healing animals. Not only does he operate a successful veterinary clinic in Baltimore, Maryland, but he's also a board member and enthusiastic participant in the Mountain Gorilla Veterinary Project, which provides healthcare to the great apes living in Rwanda, Uganda, and the Congo.

As strongly as Dr. Hammond feels about healing these animals, traveling to these regions is not without great risk. As such, you wouldn't blame him for wanting a little automotive distraction in his driveway. After learning about Ford's engineering feat—the 2013 Ford Shelby GT500—Dr. Hammond just had to have one. As we know, once you have a Mustang, even the most powerful Mustang ever built, it's difficult to leave it alone, and that's where we unwittingly stepped in to help push him down the road to incredible performance.

"I have had many fast cars. None compare to the Shelby. Arguably, it's the coolest automobile out there. The engineers designed an almost-perfect car. I say almost because one day last fall I was headed to Congo and saw your magazine on the 'stands," Dr. Kim Hammond explained. "I bought it, and during the 18-hour journey, I read it cover to cover. There is another automobile growing inside that stock Shelby … and it's a monster."

"If someone offers you a seat on a rocket, you take it. After reading your magazine, I could hardly contain myself," Dr. Hammond added. "Your magazine opened my eyes to what potential that car had. It also showed me that there are many modifications to make that not only enhance speed, but safety too. What knocked me off my feet was that the shop doing the custom work is in my backyard!"

The issue in question was our Dec. '12 installment detailing the construction of a 9-second, 950hp '13 Shelby GT500. Regular readers will recall that the shop responsible for that ground-breaking performance was Evolution Performance in Aston, Pennsylvania, which is just a short road trip from Dr. Hammond's Charm City homestead.

After a phone call, Evolution's charismatic impresario, Fred Cook, imbued Dr. Hammond with the faith to proceed on a five-month-long buildup of his prized convertible. His modest request was to simply build the "fastest, safest convertible in the world." With that order, Fred cooked up a recipe based on a Mammoth main ingredient, Kenne Bell's Liquid Cooled, 3.6-liter supercharger. However, it was not just any Kenne. This would be the first of its kind to wear an as-delivered black finish.

Of course no single mod makes a car, so Fred created a complete package, which the Evolution crew brought to life. With support from Stainless Works exhaust gear, induction from JLT, and a jolt of fuel pump voltage courtesy of a dual Kenne Bell Boost-a-Pump, the already brawny Trinity 5.8 thundered out 850 horsepower and 775 lb-ft of torque on Evo's Mustang Dyno. That adds up to over 1,000 at the McLeod flywheel.

"One of my veterinarians (Rick Linnahan) trained and became an astronaut. He flew four missions and space walked. I went to several of the liftoffs. You know space is only 50 miles away and takes about a minute to get there? This Shelby is as close to a rocket that you can get on the street, on four wheels—0-60 in 3 seconds," Dr. Hammond enthused. "Driving this Evolution Performance Shelby is as exciting as being at a space shuttle launch... and just as loud..."

Now, Dr. Hammond is used to being around apes that are about 20 times as strong as humans, so wheeling a GT500 that's five times more powerful than your average commuter car shouldn't be a big deal. However, along with having a safe and fast droptop, Dr. Hammond wanted something he could drive on a regular basis, at least when the rain stays away.

"I drive it daily. Evolution created a pedal tension that allows you to drive it normally in traffic. The clutch is smooth and doesn't break your leg to engage. The throw on the shifter is short and quick—click, click, click," Dr. Hammond said. "It has enormous power. You have to respect that. You cannot text and drive. Also, you cannot drive this powerful muscle in the rain, and it has been raining a lot this spring. It has 1,000 horses on Nitto NT05 tires. They are for dry roads only."

However the modifications weren't limited to just the engine and tires. A safe, well-rounded car needs suspension and braking upgrades. Evolution turned to Koni and Steeda to glue the car to the road. Meanwhile Wilwood got the nod for the huge stoppers, which were also part of the appearance upgrades that accent the factory Deep Impact Blue with matte-black accents.

Certainly these additions fulfilled the doctor's prescription. "Pressing down on the gas is amazing. Like first time you saw Star Trek or Star Wars—the broken stripes in the road become a single line. You press the pedal, the blower opens up, and you are in hyperspace..." Dr. Hammond gushed. "The grip from the wheels and tires is indescribable. You are thrust back in the seat, the car lays low, grips the road, and goes straight. There is no fishtailing. It's like a giant cat extending its claws, gripping, and then, in a single leap, jumping over a football field."

No fishtailing, but plenty of claws. Just like the good doctor says, there is a monster hiding under the hood of every stock '13 Shelby GT500. He just needed Evolution to free it from its cage.

Horse Sense: Only 135 '13 Shelby GT500 convertibles were produced in Deep Impact Blue. Of those, only 56 featured the base Charcoal seats with black accents. Only 7 of those cars were ordered with a front license plate holder, and Dr. Hammond's obviously wasn't one of the latter.