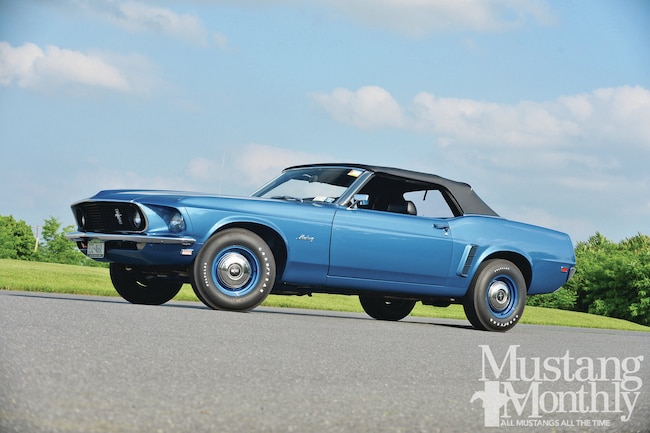 To onlookers, this CJ-powered 1969 Mustang is a rare big-block convertible. Enough said? Ford produced only 50 with the Q-code 428 Cobra Jet in this body style. And of those, only 20 came with the four-speed transmission. But beyond the rare combination of four-speed Cobra Jet and convertible, this ’69 has a significant drag racing heritage.

We spotted Phil Quinn’s rare CJ convertible last June in the row of ’69-’70 Mustangs at the Ford Nationals in Carlisle, Pennsylvania. It was obvious at first glance that the drop-top CJ was in showroom condition, beginning with a 428 Cobra Jet powerplant without ram air (thus the non-Shaker flat hood) and backed by a four-speed transmission and open 9-inch rear end with 3.25:1 gears. Options are few—no power steering, no power brakes, no power top, and certainly no air conditioning. The presence of an AM/FM radio makes Quinn laugh out loud when he comments, “What was the original owner thinking?”

The flat hood and dog-dish hub caps (easy to pop off for drag racing, of course) provide this CJ Mustang with a sleeper look. One could easily mistake the car for a 302-powered base convertible.

The first owner drove the car for about two years, but the second owner put the convertible on the drag strip.

While running a Mustang in the Super Gas class during the 1970s, Quinn remembers watching this ’69 CJ convertible compete in the Stock Eliminator class at Englishtown Raceway Park in New Jersey. In fact, the convertible’s owners—Terry Dubowick, Rich Baldassari, and John Presing—comprised the proud team of a NHRA national record holder in E-Stock Eliminator in 1971, running an 11.76 @ 115.26 mph. In 1973, they moved the convertible to Super Stock, where a bigger rear tire with wheel tubs was needed to run low 11s at over 120 mph.

While admiring the CJ from afar, even then Quinn harbored restoration plans for the convertible. “Every time I saw Presing, I would ask if he was going to sell me that car,” Quinn told us. “This went on for 15 years.”

Eventually, Quinn’s persistence paid off. “When I sold my drag car, Presing called and said he’d sell the convertible to me.”

Quinn performed the restoration himself, noting that removing the wheel tubs proved the most difficult part of the restoration. Quinn recalled how he scavenged rear quarters and wheel housings from another ’69 Mustang and spot-welded them to the back of the CJ convertible. He also had to reconstruct the frame rails, two feet of which had been sectioned off for the tub-job.

Quinn says he spent 1,100 hours returning this Cobra Jet to showroom stock condition, starting the job shortly after acquiring the car in 1999. He completed it in 2012, with help from George and Randy Porubski, the staff at Perogie Enterprises for hard-to-find parts, and Tony Prestano at Quality Auto Service for the bodywork and paint job.

The matching-number 428 CJ big block was long-gone, typical of a car that was drag raced. Quinn managed to find a date-coded block fitting the window of production for his Mustang. The end result is a Cobra Jet convertible returned to OEM stock for car shows in and around the state of New York.

The mileage is “supposed to be correct” at 26,741. With so much time spent on the drag strip, the mileage is probably just about right.

Quinn has already garnered some significant awards, including Best of Show at Fords at Englishtown, location of the drag strip where the CJ once competed in the Stock Eliminator class.