An Avid Model Car Builder, Tim Manes Rounded Out His Collection This Time With a Genuine High-Performance Model 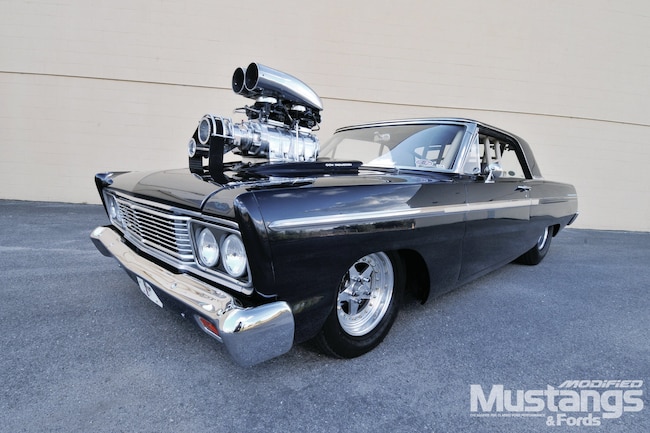 Tim Manes of Orlando, Florida, is a counter man and sales manager of a high-performance speed shop in Orlando called Horsepower Sales. Tim’s talent and years of experience make him a trusted advisor to his customers, a fact that is underscored when you get a look at his big, bad, pro street Ford Fairlane Sport Coupe.

Creating his high-performance dream ride is a story in and of itself. The adventure begins around 1977 when, at age 13, Tim saw his first ’65 Ford Fairlane. Obviously, the sighting made a strong impression since he’s owned five of them over the years! Building a model car started the process, with Tim using it to learn about wheel combinations, body modifications, and more. Tim jokes that the model has been through at least ten different configurations and it’s still not done but, as you can see, the fullsize car is...well, mostly.

Tim found this ’65 Fairlane Sport Coupe by chance when he heard it was heading to the crusher. The car had been given to a high school shop class, but it was too far gone for the students to repair. Tim donated $600 to the school, brought the car home, and began a rebuild that took nine years to complete. How do you finance the car of your dreams? In addition to his many other talents, Tim is an avid model car builder. He decided to lighten his 5,000-car collection by almost 500 cars, selling them on eBay and raising more than $25,000, enough to get the project started.

With virtually no parts available from the aftermarket, the Fairlane was an immediate challenge, requiring Tim to sharpen his fabrication skills. He disassembled the car and turned the body over to his friend, Dave Bergman, for some major restoration work. While Bergman was repairing the vintage sheetmetal, Dave Curtis and Nathan Cox from Ultimate Motorsports in Ocoee, Florida, began fabricating a new tubular frame, designed around an Art Morrison 2x3 chassis package. Along the way, they incorporated a 16-point rollcage, anticipating that the car would run in the mid 8s in the quarter-mile.

Handling and traction were addressed early, beginning with a Mustang II front suspension with Heidts 2-inch drop spindles and a Fox-body manual steering rack. The full-spool Ford 9-inch rear with 3.89 gears was narrowed to 31 inches hub-to-hub and is held in place by an Art Morrison four-link. All four corners use adjustable QA1 coilover shocks, along with Wilwood 11-inch cross-drilled and slotted disc brakes to ensure the mighty Fairlane can quickly scrub off excess speed. Larry Nadeau of Nadeau Racing (Sanford, Florida) completed the metal work, creating the new front end.

The original plan for the motor was to employ a 390 FE V-8 out of a ’63 Mercury that Tim’s grandparents owned, but a connection with a friend turned up a second alternative; a blown 429 that was too good to pass up.

The powerplant begins with all forged internals and now sports 468 cubic inches. Breathing for the powerhouse V-8 begins with 1970s vintage Super Cobra Jet R steel heads that have been ported, polished, and fitted with Ferrea valves. The GMC big-case 6-71 blower poking through the hood coincidently has the same date as the car, with both made in August 1965. It sits on a BDS intake, clearing the distributor thanks to a Hampton spacer that raises it 2 inches.

The supercharger pressurizes fuel from the pair of 850-cfm Bo Laws Performance four-barrel carbs, ensuring optimum air/fuel delivery with one throat per cylinder. The carbs are set up without any progressive linkage, operating 1:1. Exploding the air/fuel mix is an MSD crank trigger ignition, coil, and spark amplifier. Cool touches include the unique valve covers with Mercury logos done by Innovators West and the crank case evacuation system that uses an Iron City beer bottle for the overflow tank. The potent package sends an estimated 1,000 hp to the Maverick-Performance-modified C6 automatic transmission.

With the chassis and powertrain capable of winning trophies in their own right, the body was next. All the patch panels on the car were hand-fabricated, thanks to the talents of body man, Dave Bergman. Bill Woods from Holopaw, Florida, sprayed the unique Mercedes Black Opal Mica paintjob. The final theme for the car originated as a result of friends asking Tim when “that big bad Fairlane” was going to be done. The “Big & Bad” theme morphed into the Big Bad Wolf, with the BIGBAD1 license plate, the side mirror that says “Who’s Afraid?” and the Wolf mural on the back saying “I’ll Huff and Puff and Blow Your Doors Off!” Tim adds a little more fun by displaying the car at shows with a Three Little Pigs storybook on the dash.

Finishing touches to the interior were handled by Dale’s Custom Auto in Orlando, Florida, where the staff reupholstered the Corbeau GTS seats in a combination of tan and gray leather. Matching carpet, headliner, door panels, and padding for the all-encompassing rollcage gives this race car a custom look. The Fairlane dash was fitted with an Auto Meter Cobalt gauge cluster and surprisingly, Tim found room for one more form of entertainment (when the ignition is switched off!); a Dual touchscreen head unit, with 7.5-inch monitor, CD, DVD, and MP3 player is an unexpected addition that controls the trunk-mounted, 1,200-watt Rockford Fosgate amplifier, front and rear Infinity speakers, and a pair of Alpine subs mounted in custom rear enclosures. Alex “The Stereo Guy” in Orlando handled the electronics.

Now that it’s done, how quick is the completed car? Tim hopes to get it on the ’strip soon just to get a timeslip, but the car was always intended to be a street-driven show car rather than a track performer. Although Tim was in on every phase of the project, there are dozens of friends who assisted throughout the nine-year build. While we don’t have room to list them all, each gets a sincere “thanks” from a very appreciative owner. Built from lots of new and used parts, the Big Bad Fairlane spent lots of time at Unique Auto Salvage, the all-Ford salvage yard owned by Tim’s good friends, Don and DJ Chion in Orlando. It was the source of lots of hard-to-find parts on the car.