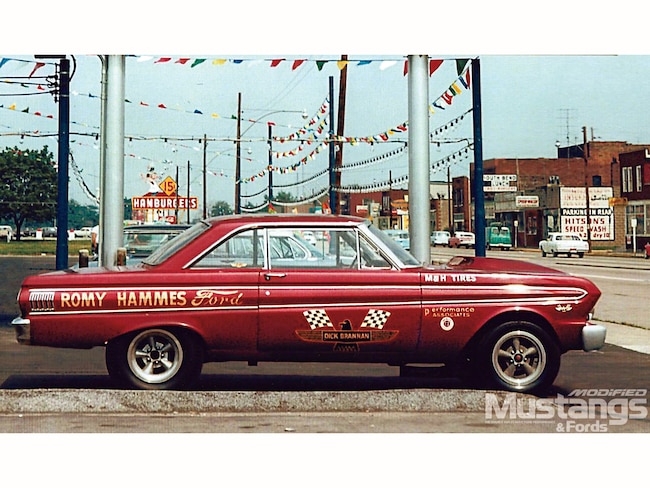 With colorful names, crazy antics, and wicked fast cars, Ford's Falcon made some big noise during the mid 1960s in drag racing, yet they were often overshadowed. Names like Gas Ronda and Bill Lawton were all the rage in their Mustangs, while Dyno Don Nicholson and Fast Eddie Schartmann became household names in their Mercury's. Even so, the Falcon raced its way into drag racing history as seen by this collection of cars.

In terms of street performance, the Falcon isn't widely recognized as a muscle car today, although the Sprint model was a fun car when ordered with a manual transmission and a 260- and later a 289-ci V-8 engine. Dearborn's marketing plans, however, were focused squarely on selling Mustangs. Ford intended for its factory team to keep these cars as stock appearing as possible, meaning no altered wheelbases, fuel injection, blowers, and so on. With the 1964-65 Falcon, however, racers had free reign to do pretty much what they wanted. In addition, they saw potential with the Falcon because of its smaller dimensions, light weight, and the fact that it could accommodate either a 427 wedge or an SOHC engine. With an attractive power-to-weight ratio and the addition of an altered wheelbase, the Falcon became a car to be reckoned with on the dragstrip.

Today, many of these cars are gone, but their mark on Ford motorsports drag racing remains. The following are some of the cars, drivers, and their stories to give a picture of the way it was.

When Korean War veteran Phil Bonner returned home, it wasn't long before he started drag racing part time in 1962. In 1964, he became a full-time racer wheeling a series of lightweight Ford Galaxies and then a Thunderbolt for Al Means Ford out of Atlanta. In late 1964, Bonner became nationally known when his 1964 Skylight Blue Falcon appeared on a nationally known magazine. Known as the "Georgia Peach," Bonner said he spent 80 percent of his time match racing the car from coast to coast with a 427 FE engine between the fenders. Weighing in at 3,200 pounds, the car would run 10s and high 9s. This was one of just two factory-built Falcon racers authorized by Ford.

Bonner's first Falcon was sold to Jim Cagle, who raced the car for several years before passing it on. Years later, he tried to reacquire the car, only to find that it had been destroyed. With Bonner's help, Cagle built a replica of the original Georgia Peach car, shown on the previous page at the Musclecar Reunion in Reading, Pennsylvania, in 2012.

In 1965, Bonner would move on to an A/FX-legal Mustang, but became even better known for his match race Falcon, which was now orange with the "Daddy Warbucks" moniker. By the time the car was retired in 1966, it reportedly ran an 8.94 at 155.70 mph.

When Hubert Platt was passed over for one of the new Ford SOHC 427 engines, he did one better than just getting mad—he got even. Unlike the two factory-authorized Falcons, Platt's car was built for match race action from what he had in the basement of his home.

Originally dubbed the "Smallest Georgia Shaker," Platt would eventually move the rear axle forward on his Falcon for better weight transfer, to make it more competitive. Renamed the "Georgia Shaker III," the car made a trip to the West Coast where it received much publicity. Originally a 1964 six-cylinder model car, it was stripped down to the barest of essentials and updated with '65 trim. A stock displacement 427 wedge was installed with a Holman-Moody–modified Weber intake that utilized Hilborn injection. A Top Loader four-speed and a 9-inch rear with 4.56:1 gears completed the drivetrain. Platt would get involved with a second Falcon known as the "Iowa Shaker" for Dick Walters Ford, which reportedly got down into the 9.20s in the quarter-mile.

Not long ago, Platt's long lost Falcon surfaced again after having been stored for decades. While one Internet pundit has disputed this claim, this car has been widely publicized and documented by Platt himself, who has made appearances with the car. Platt's "Iowa Shaker" car was reported to have been found and restored in 1991. 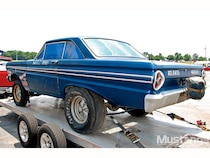 Unlike the Bonner and Platt Falcons, the "Wild Child" Falcon was reportedly built by Ford of Canada as a factory B/FX race car, which was a Factory Experimental class for small-block cars—just a handful were ever produced. With elapsed times in the 11-second range, the car was raced in 1965 out of Rankin Ford in London, Ontario, Canada, with Ev Rouse as its driver and John McIntyre as the chief mechanic or crew chief. Running a 289 Hi-Po (which was never offered in a Falcon in the states) with Weber carbs, the car reportedly ran as quick as an 11.76 at 118.95 mph.

The following year, the car moved up in class with a 427 wedge engine in place of the original 289. Ford factory part numbered fiberglass doors and fenders with a lightweight hood and trunk were added as the car was put on a crash diet. Running on fuel rather than gas, the car ran a variety of NHRA classes including B/Altered and C/Dragster, but suffered from inconsistency and breakage. This was later followed by the addition of an SOHC 427 that was backed by a C6 automatic.

The car was later repainted and campaigned under different names before it eventually disappeared from sight. John Germann located the car, bought it and restored it in 2003. It is still seen at occasional special events today.

Forty-three years have passed since the last Ford Falcon was made stateside. Yet, it remains a significant car in drag racing history and a number of people are still quite passionate about these cars. Looking at the vintage birds we have here, it's easy to understand why.

"I had wanted one of those new cammer engines, but didn't get one...and it kind of pissed me off," the 81-year-old former racer said. "So, I built a Falcon and put a hi-riser in it with injectors on alcohol and I ran those factory boys' ass."

Thus began our phone conversation with Hubert Platt, who still seems like he has enough piss and vinegar in him to intimidate any number of today's racers. Of course, that's exactly what one needed back in the mid-'60s to survive as an independent racer. Mechanical savvy, showmanship, and a heavy foot mixed with some nerve is what it took if a racer was going to not back down against any number of factory teams that were all competing for that very same match racing dollar. Hubert Platt was all of those and more, which is why he's still a popular legend today.

"You could drive that Falcon with one hand," Platt continued. "I built it in my basement. I put a straight axle under it from an Econoline van, cut 6 inches out of the center, welded it back together and moved the rear wheels up. The hi-riser was all I ever ran, and that car made me more money than any other car I ever had."

Match racing from coast to coast against some of drag racing's biggest stars helped make Platt a hot commodity—and Platt became known for his antics. Throwing everything he owned in the trunk for monster wheelstands, running on the ragged edge between victory and disaster and abusing his car and parts for maximum performance were all things that made people buy tickets when he and his Falcon were in town.

"We went out to California and I had to get the headers replaced, so we went out to Lion's the next day to try them out," Platt said. "The promoter was there. He saw how the Falcon picked up the front wheels and he liked that. He said that if I could make it wheelstand like that, he'd pay me $500 if I'd stay and match race. That was a lot of money back then. So, I did and then he said he could get me two more match races for $500 a piece. We toured everywhere!"

By 1966, Platt had stopped racing the Falcon in favor of a long-nose Mustang. He would eventually drive a number of other cars before heading up the Ford Drag Team in the late 1960s. The Falcon would sit forlornly in another racer's trailer for 21 years before the floor rotted and the car fell through. The damaged car was eventually rediscovered and saved—with the same parachute and tires that were on the car when it was put away nearly 50 years ago. Today, Hubert Platt and his Falcon can still be seen at selected reunion events around the country.

Rankin Ford’s “Wild Child” was originally built by Ford of Canada as a B/FX car before it was converted to A/FX trim with an altered wheelbase in 1965.