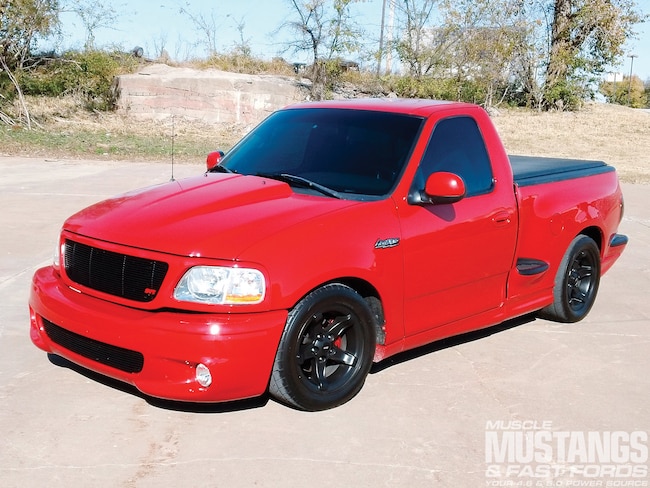 Dennis Bowen has dedicated a serious amount of time and work into his ’02 Mustang. Starting out as a V-6, Dennis slowly transformed it into his dream ride. He first added a Flowmaster exhaust system, followed by a Roush Stage 3 body kit and new wheels. He then gave his ride a new coat of paint. Tiring of the V-6, he bought a built Mustang GT donor car and swapped everything over. He has also installed a Kenne Bell supercharger. On 18 psi, Dennis’ ride cranked out 580 rwhp and 570 lb-ft of torque. He mentioned to us he’s only invested $13,000 into his ride, including the price of the vehicle when he bought it. It’s certainly come a long way, Dennis.

James Marsh is the proud owner of this factory five-speed ’90 GT convertible. The 5.0L has remained stock most of its life, with the exception of a FRPP cold-air intake system and 3G alternator. The exterior sports its original paintjob, but is enhanced with FRPP “B” lowering springs and black FR500 wheels. The rearend has been upgraded with 3.73 gears and 31-spline axles. Exhaust notes flow heavily thanks to a Mac Pro Chamber H-style mid-pipe, Flowmaster mufflers, and matching tailpipes.

Jason Ponczek and his wife, Erica, are the owners of this ’00 Saleen Speedster, number 775. Having purchased it in May 2011, they wanted something unique that would garner attention. With 20,000 original miles on the clock, it sports an automatic transmission, a full SLP exhaust, a custom-made Saleen trunk panel, and a cold-air intake. It’s run a best of 13.4 at 102 mph. We think you chose the perfect Stang, Jason.

Jason Hillebrand of Metropolis, Illinois, sent us pictures of his ’00 SVT Lightning. He has modified his ride thanks to a Metco Motorsports Solutions upper supercharger and lower crankshaft pulley, a Stiegemeier ported supercharger, 60- lb/hr injectors, and a cold-air intake. He’s also added an SCT big-air MAF, black billet upper and lower grilles, and tinted windows. On 18 pounds of boost, his Lightning laid down 422 rwhp and 498 lb-ft of torque on the dyno. Jason tells us his future plans are to add a built short-block and an aggressive tune, and widen the stock rear wheels by 2 inches.