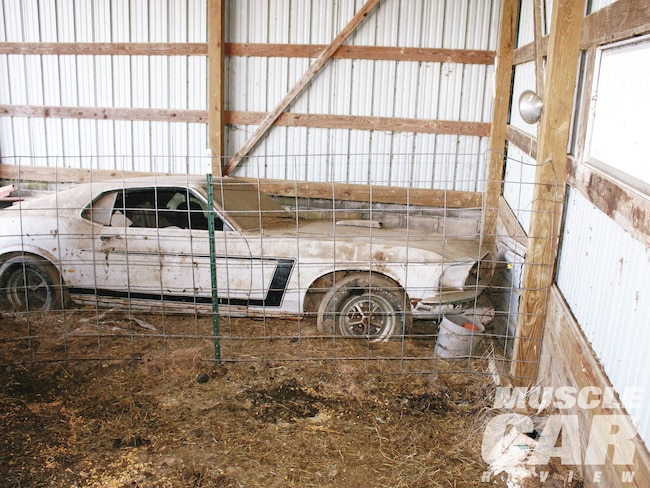 John Grafelman bleeds Ford blue. He says he is "always looking for old Fords." He remembers reading as far back as the early '80s about the long-lost 1969 Ford Mustang Boss 302 prototype once owned by car designer Larry Shinoda. Now, wouldn't that be a Mustang to find?

Incredibly, this hardworking farmer from Peoria, Illinois, already owned that very Mustang. Unbeknownst to him, the '69 Cobra Jet fastback he bought through an ad in the local newspaper was that very car.

"The fellow I bought it from was an elderly person," says John. "He told me that this car had some Ford history."

The seller made no mention of the car's prototype background. The Cobra Jet fastback's unique features could have easily been lost in the hands of either a restorer or a modifier. However, John proved to be very observant. The day he drove the car to his farm he realized the rear window sport slats were not production.

"They were so far away from production they stood out like a sore thumb," John says. How many owners would realize the latches were different?

After driving the car for two years and 7,000 miles, John stored it safely in one of his barns. Although he did not know the car's heritage, he and his family always referred to the car as "their special edition Mustang." His wife, Danette, remembers, "We drove it, had Jason's baby seat in the back, and then I realized it was kind of hard to get him in and out of, so we parked it, and that's where we stopped. The years went by faster and faster."

As the years passed and first-generation Mustangs became valuable, Mustang Monthly, Super Ford, and other magazines wrote stories about the lost Shinoda Boss prototype. Donald Farr even published a book, Mustang Boss 302, with more information on the illustrious Boss.

John kept uncovering unique features on his '69 Mustang. The spoiler mounted on the rear decklid clearly did not fit the mold of a production unit. "It is 3 inches wider and it is thicker. And the blade on it is sharper," he says. Also, the rear spoiler's two pedestals are 5 inches closer together than production and have a chrome finish, clearly not stock.

There was also an issue about the car's stance. "I was kind of thinking that maybe this car came out with some weak springs, why it set so low," John recalls. "The front and back? It sits low."

Of course, the prototype Boss sat low because of the way Kar Kraft reworked the suspension (which was developed on another Boss prototype). Kar Kraft was Ford's job shop for building specialty racing, prototype, and high-performance models, including both Bosses, the Boss 302 and 429.

The simulated scoops on top of the rear quarters were another major issue. Every Mach 1 came with these scoops. However, Shinoda preferred a smooth body for his Boss. Every '69½ Boss 302 came from the factory with smooth rear quarters without the fake scoops—which is how John's Mustang looked. He checked for evidence of modifications to this scoop on his car. He poked a long mirror down the quarter from inside the trunk and could see brazing work from the backside. Later, he pulled the rear seat to see the work directly.

"Ford brazed on those caps. They are not pop-riveted."

The stripes were another question mark. They looked like '69-vintage Boss 302 stripes, but without the Boss 302 logo. Donald Farr's book showed a picture of this Boss prototype parked in Shinoda's driveway. Sure enough, the stripes were the same, although the rear quarter-panel scoops had not yet been modified.

John had read about Shinoda's Boss 302 prototype. He knew it was originally a '69 Mach 1 with a 428 CJ and automatic transmission. Ford did not introduce the Boss 302 until the spring of 1969. The first Mach 1 predates the first Boss 302.

According to Mustang Boss 302, "One of the earliest Boss 302 graphic prototypes was a Mach 1 Cobra Jet that appeared in a photograph with Shinoda and a Cougar Eliminator." (Shinoda also designed the graphics for the Boss 302's Mercury counterpart.)

Shinoda was a hot-shot designer in those days, already famous for his work at General Motors. I knew him well because he attended car events. He was one of us, not just a famous automotive designer. Born in 1930, he built hot rods in the '50s before graduating from the Art Center College of Design in Los Angeles, his hometown.

John researched this invoice to his Mustang, which matched his car’s VIN and had “L Shinoda” in the third line from the top. The Ship To address at the bottom is for the I R Garage, which is right across the street from the Ford Design Center. This document proves the link to both Larry Shinoda and the Ford Design Center. The team used the Pastel Gray fastback as a palette to apply Shinoda’s now famous Boss 302 graphics.

Shinoda was instrumental in the design of the original '63 Corvette "split window" coupe. Three months after his friend Bunkie Knudsen left GM in January 1968 to become president of Ford, Shinoda switched brands too. At Ford, he helped design the original Boss Mustang and also came up with the name Boss. He actually stopped the car from having the name SR-2 when the decals were already made. SR-2 stood for Sedan Racing Group 2.

Shinoda always wondered what happened to his old Boss prototype. He sold the hot car to his tailor in Brighton, Michigan, sometime around 1970-1972. That's the last he knew.

In 1976, John read an ad in his local paper for a Mustang. The ad called the car a "1969 Cobra Jet," he recalls. He paid cash for what he thought was a Mach 1 with the 428 Cobra Jet backed by a C6 automatic transmission. John recollects that the odometer read somewhere around 70,000 miles. The deluxe Mach 1 seats were black with the stock red stripe. He spotted a tilt wheel, an electric trunk lock, and a built-in burglar alarm in the trunk.

The Cobra Jet fastback sat in John's garage and barn (mostly the barn) from 1978. Then, 12 to 13 years ago on a trip to California, his son Jason visited a few specialty car sales places asking about his father's striped Mustang. An owner of one of the shops had a picture of Shinoda's Boss 302 with his two daughters, Karen and Lisa. This man knew many facts about Shinoda and this car, including the fact that the original engine was a 428 CJ. He also knew Shinoda had installed an aluminum intake on the 428 CJ. Stock 428 CJs came with cast iron intakes, but this aluminum intake was still on John's 428 CJ.

Jason noticed that the car in the photos had fender scoops atop the rear quarters. His dad's '69 Boss 302 had smooth quarter-panels. Maybe his father didn't have Shinoda's Boss?

John began intensive research to determine if he owned the Shinoda Boss. Shinoda died in 1997. Today, John laments, "I could have paid Larry a plane ticket before he passed away. It would have been simple."

He did talk to Howard Freers, an engineer who worked with Larry at Ford. Freers said back then people at Kar Kraft referred to this 428-powered Boss as "Larry's Boss."

Inside the car, the three-spoke, Momo steering wheel certainly wasn't stock. John didn't think much, at first, about the LB on the horn ring. Later, he would have a revelation while plowing dirt with his tractor. Could LB stand for Larry's Boss? He actually enlisted the help of a Corvette specialist to track down Shinoda's personal '63 Corvette Sting Ray. The center part of the steering wheel on this '63 read "LC," which, John surmised, stood for Larry's Corvette. So LB could stand for Larry's Boss.

John has done a great job of detective work on his Mustang. He feels fortunate to have purchased the car and held onto it for 35 years. He plans to first show the car as is so everybody can see the special features of this special prototype. First stop will be the Boss Nationals. After several shows, he plans to restore the car to exactly stock. 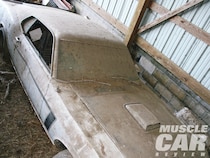 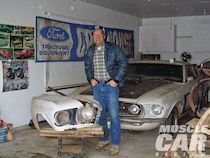 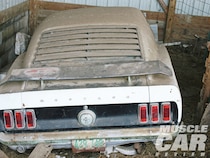 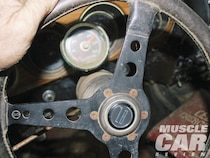 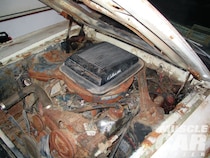 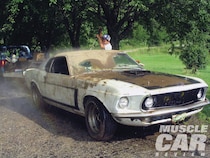 Shinoda and His Boss 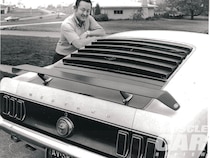 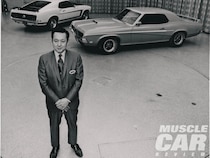 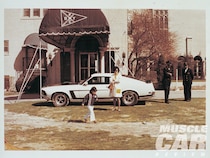