After a season hampered by weather problems, including an almost total washout at the Atco, New Jersey, event in August, the NMRA was thrilled to head into its World Finals with weather predictions for clear and dry skies. And that's what they got during a beautiful weekend at the beautiful Beech Bend Raceway Park in Bowling Green, Kentucky.

With great weather in the heart of the Ford-rich Midwest, the NMRA's Laurel Mountain Mustang Auto Show attracted a full field of Mustangs and Fords, allowing the NMRA to hand out First and Second Place trophies for nearly all of its many show categories. Joe Davis was a big winner with his '75 Mustang II Mach 1 as he took a Top 20 award on Saturday, along with Best '71-'78 Mustang and Mustang Monthly's Editor's Choice on Sunday. 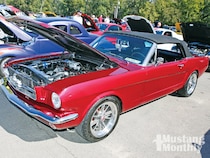 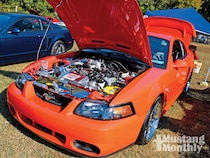 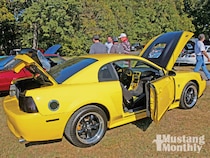 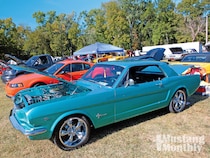 Editor's Choice
It was certainly nice to see a Mustang II at the Laurel Mountain Mustang Auto Show during the NMRA's World Finals in Kentucky. So nice, in fact, that photographer Paul Rosner selected Joe Davis' '75 Mach 1 for the Mustang Monthly "Editor's Choice" award.

A machinist from Crawfordsville, Indiana, Joe has made some improvements to his well-optioned Mustang II, but none that take away from the car's stock demeanor. As a nod to earlier Mach 1s, the vintage Shaker-style hoodscoop is attached to the hood instead of protruding through. Fifteen-inch Magnum 500 wheels add yet another touch of previous Mustang muscle. Less obvious updates include a 9-inch rearend with 3.50 gears, four-wheel disc brakes, and 2-inch dropped front spindles. Under the hood, Joe has replaced the 302's factory two-barrel setup with an Edelbrock Performer intake and Holley four-barrel carb.

Even a fan of the much-maligned Mustang II has their highpoint and that would be a 1978 King Cobra.