National Trail Raceway Was The Setting For The Laurel Mountain Auto Show At The NMRA's Ford Expo In Columbus, Ohio

Round six of the NMRA's seven-event season took place at National Trail Raceway in Columbus, Ohio, over Labor Day weekend. If it sounds familiar to you old-timers out there, yes, it's a continuation of the Ford Expo that's been happening in Columbus for the past 30 years.

As you'd expect, Mustangs were a big part of the Laurel Mountain Auto Show, with ponycars claiming over half of the spots for Saturday's Top 20 Fords awards. Other big Mustang winners were Ted and Kristi Smith and their '67 Mustang convertible (Best Classic Mustang), Scott Van Hoose for Best Saleen, and Gus O'Day with his low-mileage '72 Mach 1 that went home with the Mustang Monthly Editor's Choice award. 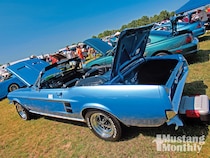 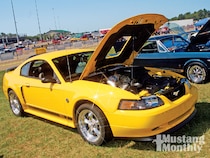 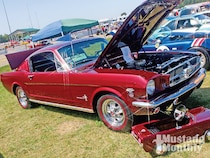 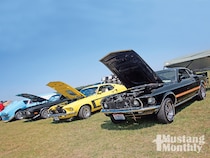 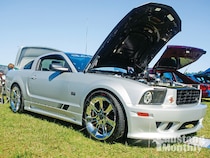 Editor's Choice
Photographer Paul Rosner was right on the money when he selected Gus O'Day's '72 Mach 1 for Mustang Monthly's Editor's Choice award. His handwritten note on Gus's tech sheet says, "Awesome! All original plug wires and all!" Yep, it's our kind of Mustang.

There's a reason for the originality. The Mach is a low-mileage car with the odometer showing just 39,000 miles. It's just a coincidence that we have another low-mileage '72 Mach 1 featured in this issue. Like Eric Petosa's red Mach, Gus's blue-with-argent-stripes '72 is powered by an optional 351, only it's the two-barrel 351 Cleveland/automatic combination instead of the H.O./four-speed in Eric's car. Check out the engine photo and you'll see factory air conditioning along with all of the correct brackets and hoses. Gus and Eric should get together to compare notes.