The NMRA made its fourth stop of the season in Joliet, Illinois, for the Keystone Automotive Ford Nationals, held at Route 66 Raceway in conjunction with the NMCA Edelbrock Muscle Car Nationals and Motive Gear Super Bowl of Street Legal Drag Racing III presented by Nitto Tire. Whew! That's a mouthful. Perhaps we should shorten it to the NMRAKAFN, NMCAEMCN, and MGSBSLDR Nationals. On second thought, even that's too long.

Regardless, we're more interested in the NMRA Ford Nationals, specifically the car show, which played host to an impressive gathering of Mustangs. Congratulations to Jim McLean, whose '69 Mustang took the Best Classic Mustang award on Saturday, and to Phil Pulo, who went home with Sunday's Best of Show for his '92 Mustang. 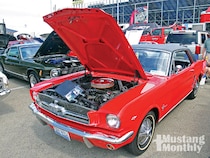 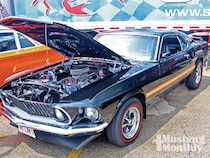 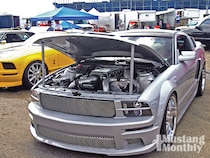 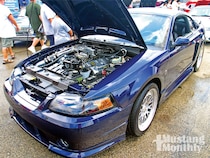 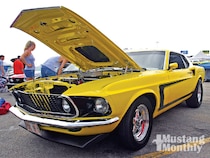 Editor's Choice
Viewing Patrick Krupinski's '69 Mustang Grande takes you right back to the late '60s, when the Grande hardtops set the standard for Mustang luxury. Restored to original specs, Patrick's Wimbledon White Grande, with the optional vinyl roof, looks like a time warp back to 1969.

Patrick purchased the hardtop in 2000 from a neighborhood couple. "I watched it drive through the area for a couple of years before it went up for sale," Patrick says.

Right after the purchase, Patrick went to work. "I took the car apart and reassembled it several times during the restoration, doing the work during the winter and enjoying it through the summer by driving it as much as possible." For seven years, Patrick refined the restoration with help from his brother-in-law, Lou Rizzo of L&R Designs, who took care of the body and paint work. Patrick and his wife, Patty, attend many cruise nights and car shows around their hometown of Muskego, Wisconsin.

The Krupinski's' Grande was well-equipped from the factory. In addition to the luxurious Grande package, the car is optioned with the 351 two-barrel engine, FMX automatic transmission, Visibility Group, console, power steering, air-conditioning, AM/8-track stereo, tinted glass, and Deluxe seatbelts. Patrick restored the car to factory condition with one exception-he replaced the factory radio with an aftermarket AM/FM cassette unit. "We spend a lot of time in the car," he explains. "Cruising with just an AM radio wasn't our idea of fun."