You'd Be Happy, Too, If You Belonged To The Mustang Club Of Aruba

It's the last thing you'd expect to see on the tropical island of Aruba. The bright yellow Urataka Center, a former rum shop turned into a bar and grill on the small Caribbean island, fits right in with the brightly painted homes in the area. Once inside, you're surprised to find the walls decorated with Mustangs, from pictures and posters to a collection of die-cast Mustang models. The owner, Doque Croeze, explains that he's not only a long-time Mustang fan, he's also the president and cofounder of the Mustang Club of Aruba.

Yes, there is an MCA in Aruba. According to Doque, he and fellow Mustang lovers Eric De Cuba and Maky Kelly founded the organization in 1997. "Each of us had an old Mustang," says Doque, who owns a '67. "Eric sent out letters saying we were starting a club. Today we have more than 50 members who own more than 75 Mustangs. Most of them are newer models like 5.0s, but we also have several vintage cars." 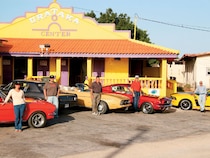 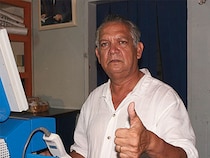 Doque's Urataka Center serves as the unofficial club gathering spot at least bimonthly, including special events, such as Christmas dinner. The bar and grill is the perfect location, with its TVs typically turned to American automotive shows and a front porch that overlooks the parking lot. It's located in the middle of the island, between Santa Cruz and the Arikok National Park, but location really doesn't matter on an island that's no more than 6 miles wide and 20 miles long.

Located just off the northern coast of Venezuela, tourists and cruise ship visitors know Aruba for its beautiful beaches, tropical climate, and friendly populace. But it's also a car-crazy island. In fact, drag racing is Aruba's number-one sport. If you're lucky enough to visit, be sure to stop by the Urataka Center for a pizza. Tell Doque that Mustang Monthly sent you.

Working For A Living
Francis Butler: "Would you like to come to Aruba for a drag race?"

Me: "Will there be Mustangs?"

It's a no-brainer when someone asks if you'd like to visit Aruba to cover a drag race. Of course, Mustang Monthly isn't a drag racing magazine, but when Francis told us about the Mustang Club of Aruba, the trip was on. But not without my wife, Pam.

Unless you've been there on vacation or as a cruise ship stop, you may group Aruba with other Caribbean destinations. But unlike most Caribbean islands, Aruba has a dry, desert-like climate. The south side is what people expect, with beautiful white beaches and crystal-clear water in shades of turquoise and blue. The northern coastline, however, is rugged with rock formations and pounding surf. In between, the island is more like a desert, with rocks and cacti everywhere. But don't worry about desert heat. Because of its location, Aruba boasts a year-round average temperature of 82 degrees, which feels even cooler due to the ever-present southwestern trade wind. The breeze is so prevalent that the island's famous Divi Divi trees are bent in a southwestern direction.

Pam and I were part of the invited media for the Caribbean Shootout at Aruba International Raceway Park. We were graciously hosted by Theo de Jongh (a Corvette owner, we learned, but we didn't hold it against him) from the Aruba Tourism Authority, who made sure we had plenty of down time to take in the island attractions, from historic sites such as the California lighthouse to the modern Revue show at the Renaissance Hotel in downtown Oranjestad, Aruba's largest city and port for cruise ships. Pam discovered that the shopping is good, too.

Part of the Kingdom of the Netherlands, Aruba is a self-governing entity within the Dutch Antilles. Arubans come from a wide variety of backgrounds and most speak several languages, including English, Dutch, and Papiamento, a uniquely Aruban mix of Dutch, Spanish, and Portuguese. Aruba's motto is "One Happy Island," as displayed on license plates; that must explain why the people there are so friendly and helpful.

The fact that it has a Mustang club is an added bonus. 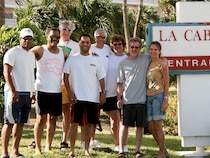 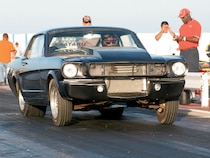 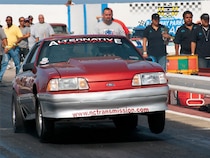 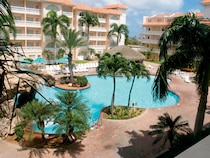 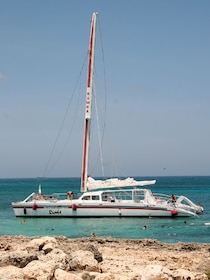 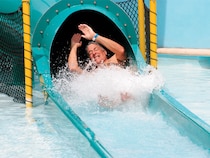 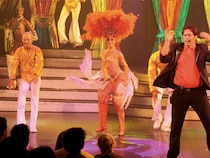 Art Of The Deal
Jay Daryanani bought his '65 Mustang in 1995, well before Gone in 60 Seconds sent fastback prices through the roof. But it was patience on Jay's part that made a good deal even better.

"I first saw the car at Gus Machado Ford in Hialeah, Florida," Jay says. "It was owned by a sales manager, but I wasn't willing to pay the $10,000 he was asking for it. A year later, I returned to buy a Ford Ranger for work purposes and spotted the Mustang abandoned in a back lot. It had flat tires and other neglect, so I struck a deal for the truck and the Mustang."

After exporting the Mustang to Aruba, Jay began making improvements, including a four-row radiator from Dallas Mustang and a new gas tank. Aruba Speed Shop rebuilt the nonoriginal 302 small-block, adding modifications such as 289 Hi-Po heads, a Crane cam, an Edelbrock Performer intake and 600-cfm carb, a PerTronix ignition, and Hooker headers with DynoMax mufflers. Jay and his partners in automotive crime-Max Arends, Clinton Kock, and Willy Thiellen-are currently building a turbo-charged '93 Mustang for 8-second passes at Aruba International Dragway. "When that car is finished, I'll focus on restoring the '65 fastback," Jay says.

Muscular Mustang
Marcelo Kock says he loves the musclecars of the '60s, especially the fastbacks. His '65 Mustang maintains its classic shape, but underhood is a muscular 289 small-block with ported Hi-Po heads, a Comp Cams camshaft, a Cobra intake with a 600-cfm Holley, and Tri-Y headers dumping into Flowmaster mufflers. Marcelo, an area manager for Venezuela's Aeropostal Airlines, built the engine with help from Norberto Vieira, who rebuilt and prepped the cylinder heads. The drivetrain consists of a C4 automatic with B&M TransPak and 3.50 gears in the 8-inch rearend. All the better for getting from one side of the island to the other, we suppose.

Marcelo's Mustang is more than just horsepower. The Pearl Red paint by Jossy Motors in Oranjestad glistens in the Aruba sun; the wheels are Magnum 500s. "A great deal of attention was paid to installing the largest and widest tires possible," Marcelo says. He ended up with P235/60R14s on the front and P245/60R14s on the rear.

According to Marcelo, the Mustang was first built in Caracas, Venezuela, in 1986. Since obtaining the car and shipping it to Aruba, he has made numerous upgrades, such as rebuilding the engine and transmission with performance mods. It has fresh paint and new upholstery in white with red. Marcelo says most of the parts came from National Parts Depot in the U.S.