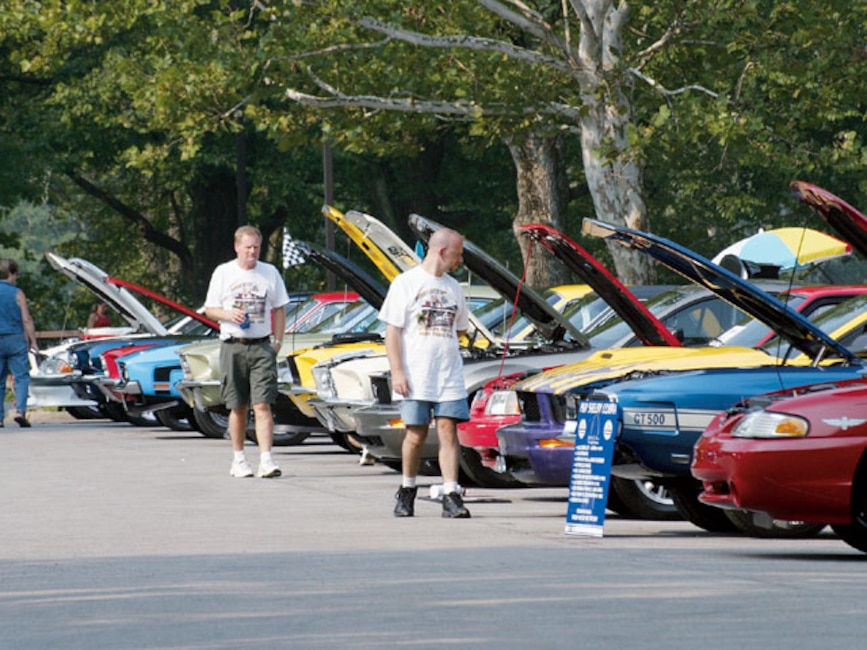 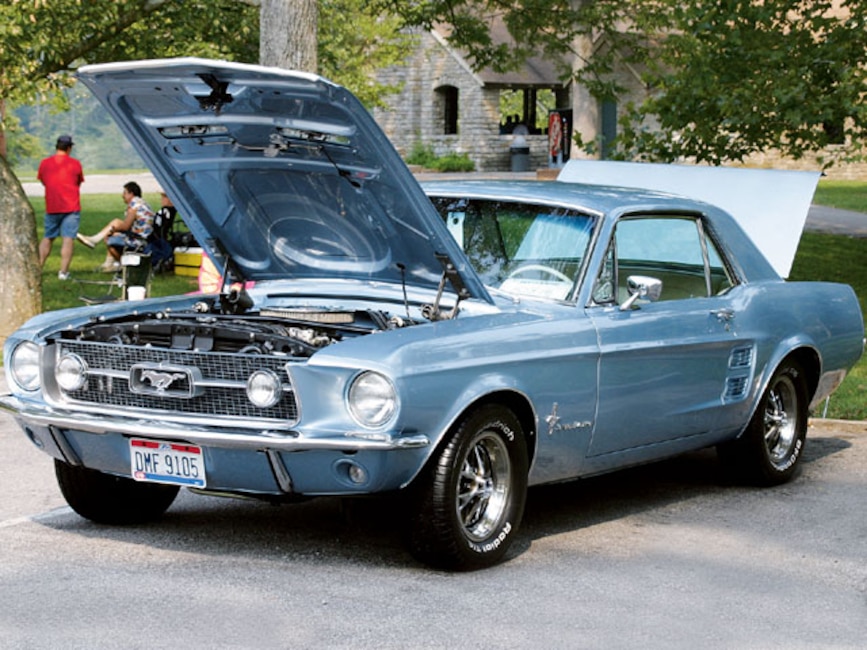 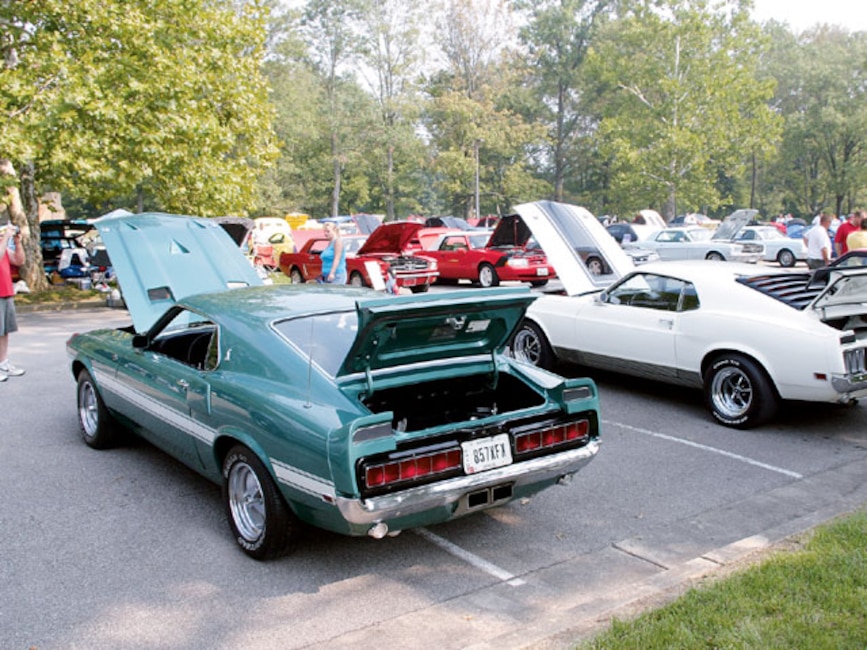 While the fall weather in Kentucky is beautiful, it was nice to escape the sun in the show's shady parking areas. 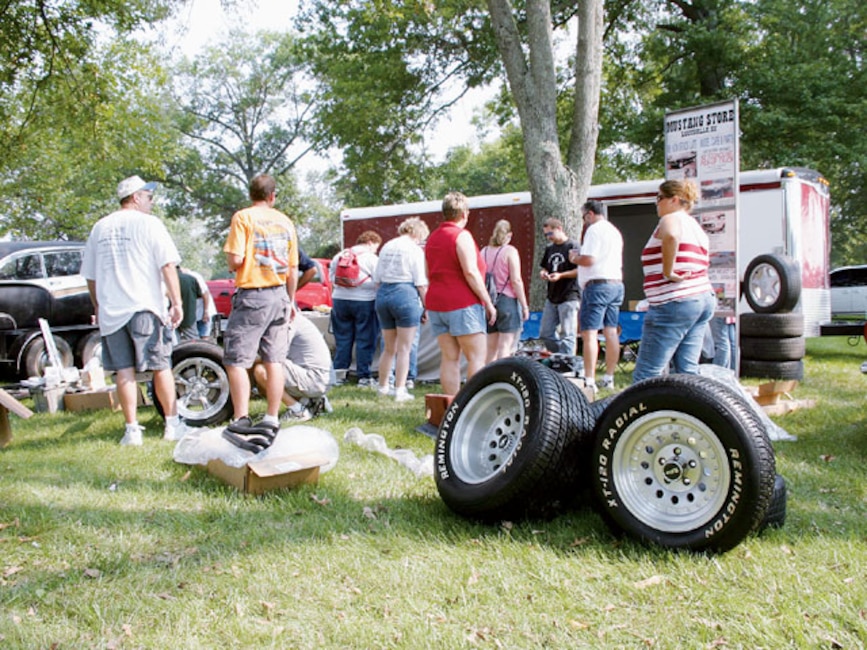 With a display of used and new Mustang parts, The Mustang Store, out of Louisville, Kentucky, attracted shoppers all day.

If there's one thing I've noticed about today's most popular Mustang shows, it's that Mustang owners enjoy visiting places that offer distractions from Mustangs. That may seem odd, but when you consider that Mustang shows are typically family affairs, it makes sense. While dad cleans the car and chats incessantly about Mustangs, mom can escape to browse the historical district while little Tommy fishes or explores the great outdoors.

The Derby City Mustang Club put it all together with a laid-back September in the Park show, held September 9-11, among the rolling hills at General Butler State Resort Park in Carrollton, Kentucky, on the Ohio River between Louisville and Cincinnati. In addition to Friday's Pony Trails and Saturday's show, the annual event offers plenty of scenic and historic diversions, along with social interaction during the Friday night welcome bash and Saturday evening "Back to the '60s" sock-hop with The Legendary Cruisers band.

This year, most attendees stayed at the park, either in the Butler Lodge or in one of the many cottages near the show site. Show Chairman Ron Kinberger was kind enough to arrange a cottage for me, which could be a problem in the future because I may never want to stay in another hotel room.

Saturday's show, sponsored by Bill Collins Ford and held in the shade of the park entrance, showcased over 200 Mustangs of all years and models. New for this year was a swap meet, sponsored by Roush Performance and Mustangs Unlimited.

Next year, if you're looking to attend a Mustang and Ford show with great cars, friendly people, nice fall weather, and amenities such as beautiful scenery, historic landmarks, golf, paddleboats, social activities, and more, consider heading into the bluegrass hills of Kentucky for September in the Park. You can find more information at the club's Web site, located at www.derbycitymustangclub.com.

My one suggestion: Ask for a cottage. 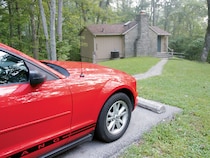 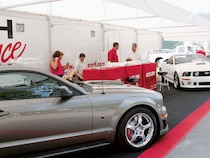 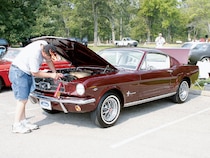 Derby City Mustang Club Vice-President Joe Walter served as the official emcee of the Pony Trails. He instructed other speakers to keep their talks shorts, a tactic that-we learned later-allowed more time for him.

After cruising through parts of rural Kentucky, the September in the Park Pony Trails stopped off at Our Best Restaurant for a leisurely lunch and live music.

Kentucky Trails
Last year, September in the Park was one of Mustang Monthly's scheduled Pony Trails. However, when Hurricane Ivan became the third storm to threaten our central Florida offices, we canceled the trip to Kentucky to protect home and family. Thankfully, club VP Joe Walter saved the day for us by serving as the Trail Boss and leading the group to Kentucky Speedway. This year, with Hurricane Ophelia moving away, we were able to make the trip.

The Kentucky Pony Trails proved to be one of the most organized ever. Theoda Franklin, the resource and conservation coordinator for several northern Kentucky counties, planned the scenic route, which mostly paralleled the Little Kentucky River. Carroll County Tourism Director Sarah Oak arranged police escorts not only in Carrollton, but also at intersections in neighboring counties.

With police halting traffic and Joe Walter leading the way, our journey to Our Best Restaurant in Smithfield was both enjoyable and uneventful. I rode along in the '91 Saleen convertible owned by club President Gene Smith, who kept his cammed and supercharged Saleen on a leash during the slow moving cruise.

Our Best Restaurant rolled out the green grass carpet for our 115-car caravan, providing ample parking, good food (inside the restaurant and at an outside cook-out), a live band, and even port-a-potties to accommodate those who had spent the last two hours drinking coffee. After a leisurely two-hour visit, we saddled up for the trip back to General Butler State Resort Park.