Mount Up For A Look At Where We Went, Who Went, And How It Turned Out

If you'd told us when we started this shindig four years ago that our numbers would have been as high as they are now, I would have personally told you, "No way." Back in the day, I figured we might get an average of 30 cars; to me, that always seemed like a lot of vehicular motivation. Thirty cars can stretch a half mile, 30 cars can get really, really lost in a hurry (just ask those 10 cars that followed the CJ Pony Parts employee almost all the way home). Well, this year we've blown past that number in every show. The three we're going to revisit this month even accomplished it with a nasty forecast for bad weather.

Let me tell you, nothing can humble you like a Pony Trail-I know. To have several dozen cars following your directions as well as your hindquarters is a daunting task. Keeping the Trail fun is even harder. After being trapped inside a Mustang for two hours, you have to be either a) pretty funny or b) throwing money out the window. We try to keep the ambience light and enjoyable. We're also, as of this writing, working on the Retread T-shirts. I can't say right now that we'll have them ready this year, but I'll say that every effort is being made to produce these, much sought-after, shirts.

Ocala was a shock-bottom line. We never anticipated the number of cars we had. We figured on our usual run of 50. Well, we were so wrong that we nearly filled the National Parts Depot parking lot to capacity with 99-plus Fords. The rest of the crew joined up in Dunellon, Florida, to make our grand total 111. Though good, it wasn't enough to unseat The Kings of Cruise in Seattle, but more on that next month.

Weather was good, mediocre, and finally rainy. This was a bad omen for the rest of our Trails up to the Rocky Mountain Roundup. It drizzled on the Lazarus Project as we drove back to Ocala and the Silver Springs show site (hey, the wipers work!). However, we were happy the Trail had gone off with only a few glitches-such as the fact that the restaurants in Cedar Key were all filled up and several folks followed me to a Stop and Shop; all I as after was a Snickers and a Mountain Dew. Since this is an annual show and Trail, you should make a point to visit in January 2002. Maybe this year we can beat those folks up in Seattle.

Macon is our only weekend Trail and the weather forecaster couldn't have gut-kicked us any harder had he tried. Projected weather for the post show Trail on Sunday was rain and chilly conditions. I figured this Trail would be a blow-folks would just stay home rather than risk blechy roads and cold conditions. Boy, was I wrong. In fact, we almost didn't have enough room at Mustang Central in Byron, Georgia, for all the Mustangs. As we counted, the numbers just got better. In the end, we had 62 cars lined up and ready to go-awesome. Everyone was there to have a good time and no one was interested in canceling-even though I tried to give them an out. 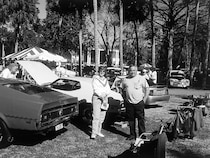 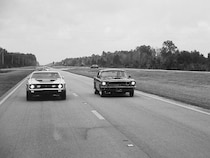 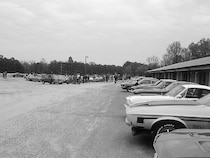 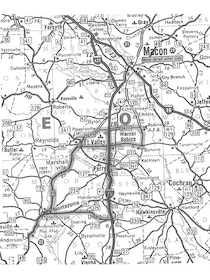 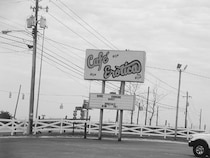 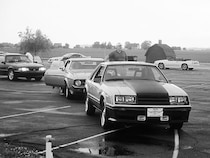 As always, at the Shelby American Automobile Club (SAAC) Spring Fling, there were lots-o-Shelbys.

The first stop was at the Warner Robins Air Force Base Museum. If you're ever in the area and are a fan of war birds, you need to stop in here. Next was the locally infamous Caf Erotica; relax, it was the best rallying point we could find with ample parking for 62 Mustangs. Andersonville Civil War Prison Camp and POW Memorial was our next stop. This took us from the sublimely wacky (erotica) to the profoundly heart-wrenching (Andersonville). The displays and the chilly winds give you an idea of just how terrible war is and the cost it exacts on our men and women. From there, it was back to Mustang Central.

Interesting Points
* Wondering when the rain is going to stop
* Did we mention the rain
* Shelbyville rolling out the red carpet for us
* SAAC Spring Fling: nice folks, cool cars, and great location

When I think of this Trail, I'll always remember thinking, With weather like this, we'll be lucky to have 30 cars. I rode in my good friend Dan Aiken's '79 Pace Car, and as we rounded the corner and started down the hill, I was mildly annoyed that someone had parked the cars dangerously close to the blind corner. Still, I began to count; by the time I was finished, we had 62 cars. So there was a good reason for the trouble: there just wasn't any place for the cars to go. Before all was said and done, the total came to more like 98. This was on a day when frogs were ducking and covering, a day convertible owners hate, a day you would never have expected to see a '68 Shelby GT500 blasting through torrential downpours at 60 mph. But it all happened-and this was even before Shelbyville.

In a driving rain, we arrived at the queuing-up area-a church on the outskirts of town. We were then escorted into the center of Shelbyville, which they'd closed off, and all of us were treated like dignitaries. Lord, if those people only knew. We were even presented with the keys to the city! I mean literally got the keys to Shelbyville. We still had to pay for lunch, though.

That's Frank Zerr, Shelbyville's mayor on the left. If you don't know who's on the right, see page 4. He's giving me the keys to Shelbyville-obviously,he doesn't know me very well, does he?

The show was awesome, and we plan on going back to this event one more time. You see, next year is their 25th anniversary.