The ALL-FORD CARLISLE EVENT Is A Must Show To Attend

Mark Houlahan Tech Editor, Mustang Monthly
December 6, 2005
Could this be the line for the restrooms, or maybe these people are patiently waiting for a chance to see some rare Ford drag racing iron? No, they're a bunch of hungry people at the Boss Cars National event, held within the All-Ford Carlisle show, waiting their turn for some good old-fashioned barbeque on Saturday evening. The Boss Nationals had more than 275 Boss 302 Mustangs and Cougars, and Boss 351 and 429 Mustangs in attendance of just about every color and model year built from low-mileage concours to tricked-out restomod.

It's been a few years since I've had the good fortune of attending the Carlisle All-Ford Nationals, and I'm here to tell you it was another great year at the Carlisle fairgrounds. Sure, there was a bit of rain, but as usual it was far from a deterrent for the Ford faithful that attended.

Going to the same show year after year can sometimes get a little old, but when it comes to the All-Ford Carlisle show, it never does. Every year we've attended there's been something new to see or do. Whether it's the interesting and rare vehicles found in Building T, the special invitational guests, the hundreds upon hundreds of Fun Field participants, or the rows and rows of new and used parts deals, you'll always have a great time.

Some people think attending the Carlisle show is only for people that are looking for hard-to-find parts. While it's true there are interesting and rare parts to be found walking the rows of vendors, there's also so much more offered amongst the Carlisle fairgrounds and surrounding communities that you owe it to yourself to attend the Carlisle All-Ford show if you've never been. The Women's Oasis tent has bingo, wine tasting, massages, and manicures for the ladies (and it's air conditioned too!). There are also seminars, drag racing, a beauty contest, children's activities, and more on the fairgrounds. Did we mention there are a lot of display cars and parts to be seen too?

Take a long weekend and spend a few days sightseeing in the area. There's much to offer in the area, such as Gettysburg, which is rich in civil war history. In Gettysburg you can visit the Gettysburg National Military Park, see the sight of the Gettysburg Address, and even General Robert E. Lee's headquarters. There's also Hershey Park in neighboring Hershey, where you can ride roller coasters and tour the Hershey chocolate factory. Maybe you'd like to take a ride on a riverboat cruise down the historic Susquehanna River. There's also plenty of antique districts and outlet shopping. There's truly something for everyone in the family. Check out our photos for a recap of this year's All-Ford show. 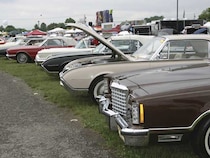 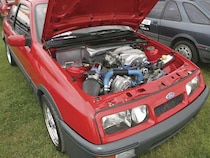 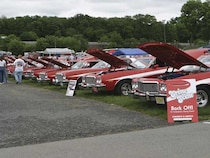 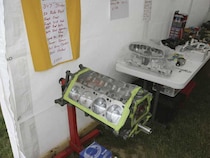 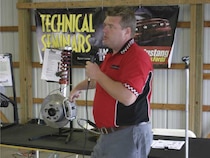 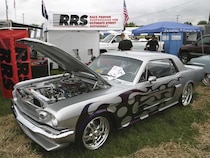 Getting Boss'd Around
The Boss Car Nationals was held within the confines of the All-Ford show at Carlisle, and it was the most amazing display of cars I've seen in a long, long time. I'm partial to yellow '69 Boss 302s (I can get picky about year and color since I know I'll never own one), but no matter the year or color, there was an example on the grounds for you to drool over. From ultra-low-mileage concours examples to built-to-the-hilt Restomods, you could have seen it all. Activities included the aforementioned barbeque dinner along with a cruise to the local Hooters, raffle prizes, photography, plaques, racing displays, racing footage, and more. One of the highlights for many was the ability to speak with and get autographs from Bud Moore (of Trans-Am racing fame) and our very own Donald Farr, author of Mustang Boss 302, Ford's Trans-Am Pony Car. Here's a few snapshots of the happenings within the Boss Car Nationals itself.