Mustangs Plus Holds The Very First Restomods In Reno

This is an idea that has been brewing for many years. It was 1995 when Ron Bramlett of Mustangs Plus and I were wondering aloud what to call this thing we call restomod today. "modified" had become a dirty word in the eyes of purists who wanted no part of anything that wasn't factory original. Call it a purist hate crime bent on political correctness--shunning anything with an aftermarket part installed. "Please step to the back of the car show."

The competitive nature of concours-original showmanship became so stressful for some that they stopped coming in great numbers. Some car shows produced just enough people for a game of poker. Ron saw an alarming pattern in the hobby that was threatening to make it extinct. He always knew the vast majority of classic Mustangs out there weren't concours-correct museum pieces. They were Mustangs built the way owners liked them--with a smattering of personal touches that made each of them unique. Ron discovered through his own series of Mustangs Plus-sponsored car shows that more people turn out for a show when you turn down the pressure and allow people to just be themselves, without fear of persecution from people with a different mindset. And so, Restomods In Reno was born.

Ron and Dave Bramlett had been planning Restomods In Reno for years. Memorial Day 2005 couldn't have been a better time to get started. Some 230 Mustangs, both box stock and coolly modified, turned out side-by-side in the northern Nevada sun (and rain).

Do you know what happened at the first Restomods In Reno? Nothing. No cross words were exchanged. People greeted each other nicely, parked their Mustangs, and had a nice time. Stock and modified mixed it up at Reno in good, clean, mutually respectful fun--cracking throttles and busting chops in a good backyard cookout atmosphere.

This is Mustangs Plus' first restomod effort: the Ben Smith retractable Mustang Skyliner. a '641/2 convertible, unthinkable with the purists in 1994 when it was built. This effort led to the Ronster sport roadster in 1997.

Friday, there was a brag fest, which put a microphone in the hand of just about anyone willing to stand there and share a tall story or two. At an event like this, you can count on a little tire barking and horsing around. Saturday, enthusiasts blew off the dust and mud with a little spit and polish, with some bringing out their Mustangs for the first time. It was a car show that allowed enthusiasts to judge one another's Mustangs in a fair, equitable competition called People's Choice. Sunday morning, Pony Trails--Nevada-style--with dozens of Mustangs headed into the northern Nevada mountains to visit Virginia City and return to Reno that afternoon. Restomods in Reno wasn't just about showing, but also driving. Mustangs Plus is surely on to something here--something that promises to become a tradition in the years ahead.

We can safely say everyone had a good time with greater expectations for next year, undoubtedly eclipsing this year's turnout. Only time will tell. But virtually everyone who attended the very first Restomods In Reno has next year's show penned in on their calendar.

For more information on Restomods In Reno, go to www.restomodshows.com or www.mustangsplus.com. 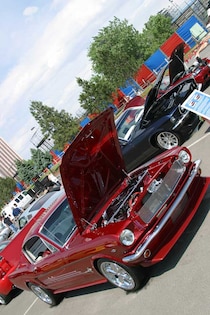 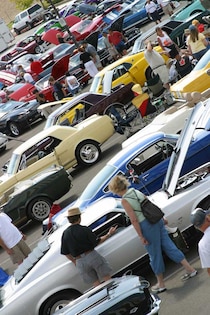 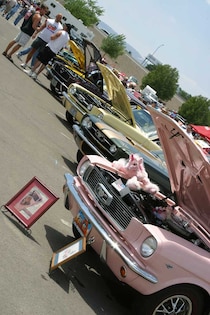 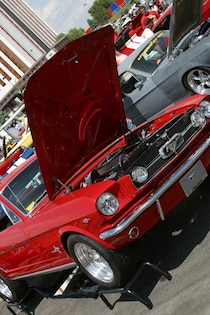