Racers in Norwalk, Ohio, fought the good fight among a sea of fierce competitors.

Fun Ford's return to Norwalk, Ohio, was well received as usual, with a bumper crop of cool cars and crafty competitors. The excitement began on Friday during the first qualifying session when the Aruba-based Pro car of Bert Kelkboom ventured into the sand at the end of the track; the culprit--a self-admitted brain fade. Neither the car nor the driver were hurt, and the team returned on Saturday to qualify well. 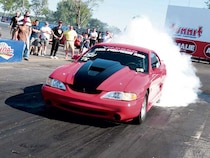 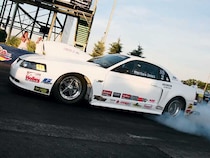 The '04 Street Warrior champion, Darrell Peterson, found himself elbow deep in an engine swap on Saturday as an engine failure forced him to borrow one from Jeff Chambers, a fellow Street Warrior competitor and, thankfully, a native to the parts near Norwalk.

In Tough Truck, one of the racers showed up with a transbrake installed in his ride. Starting line devices such as these are prohibited in the class, and the decision by the event staff to let him run after disconnecting it divided the class. 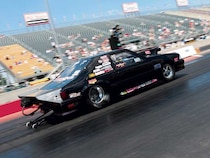 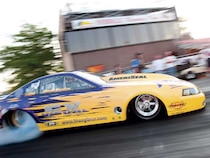 The bracket classes in Norwalk were off the hook as usual for this event, and since the Muscle Mustangs & Fast Fords True Street class had "only" 98 cars, they were able to run three passes instead of the frequently abbreviated two-run format.

Fun Ford Norwalk is one event you don't want to miss. The competition is great, and the track staff are some of the friendliest around. 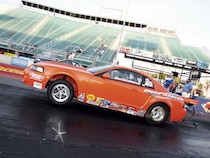 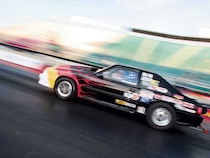 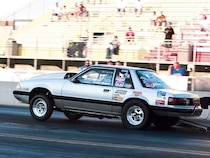 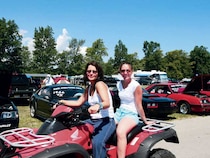 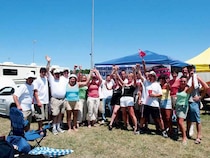 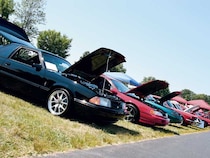 There was a thrash in Blow-By Racing Street Warrior champ Darrell Peterson's pits as he lost an engine early on. Fellow Warrior racer (and nearby Norwalk resident) Jeff Chambers lent him an engine that was installed overnight. The heads-up community in the pits wasn't going to let Peterson go down without a fight, so competitors such as Gary Rohe, Chuck Samuel, Demo Koutsis, Robert Hindman, Ronnie Wilson, Adam Louramore, and Brian Tooley all helped him turn wrenches.

Despite Peterson's blitzkrieg effort to get the car up and running, Jeremy Martorella took home the prize money in the normally aspirated Street Warrior class. Peterson was first off the Tree, but Martorella drove past him with a 9.47 to 9.52 win.

In the SCT Street Stang class, points leader Tony Whetstone was first-round meat, while Darrell Lucas (Second) and Tom Conrad (Third) advanced. In the final, it was Lucas and Conrad in a double breakout, with Lucas coming out victorious.

Dubbed Norwalk-Gate by your author, The JDM Tough Truck class was in a frenzy over David Gates who showed up with a transbrake installed in his truck. Transbrakes are prohibited in the class and disconnection of the device was met by disapproval from some of the competitors as an acceptable way for Gates to be able to compete. The ruling from the Fun Ford staff allowed Gates to run, and run he did until the final where he defeated points leader Don Justus.