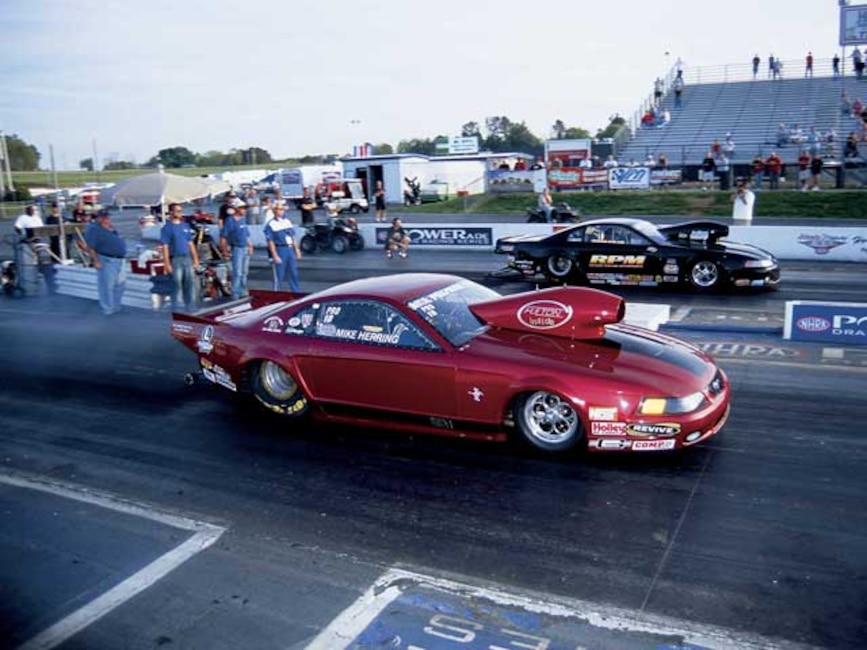 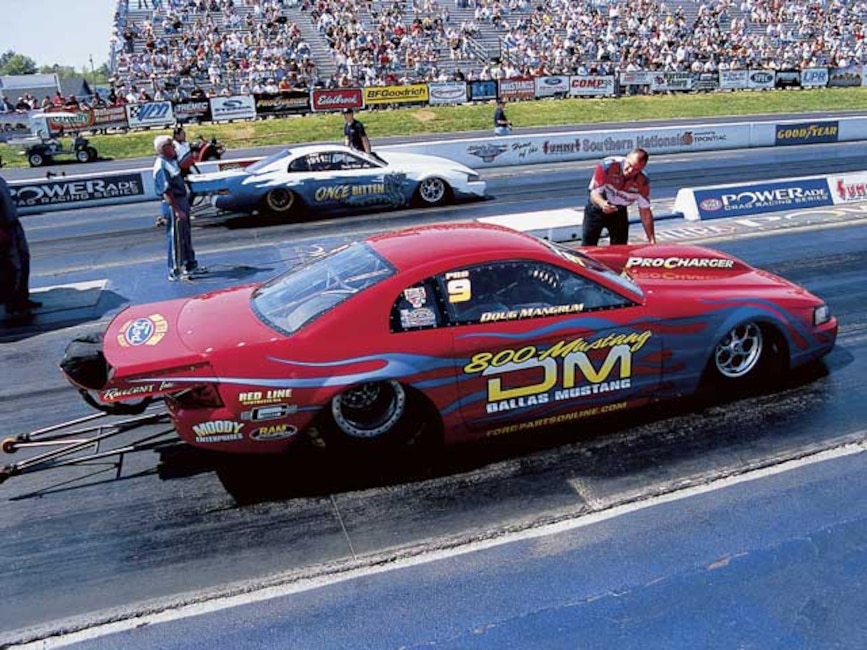 Long-time Pro campaigner Doug Mangrum (near lane) snagged the second qualifying spot with a 6.476/214.79 effort from his ProCharged Pony, but mechanical problems kept him from doing any damage in eliminations. 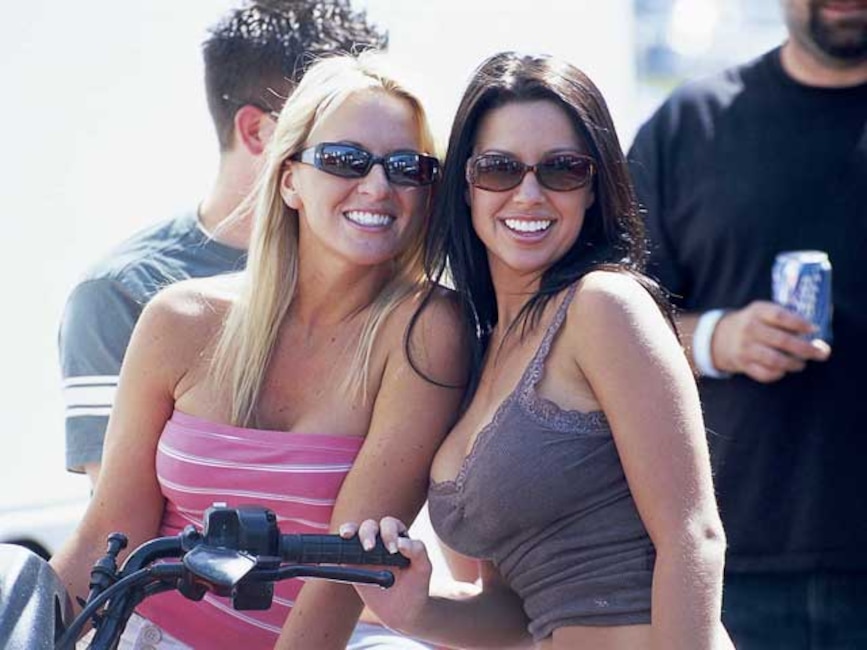 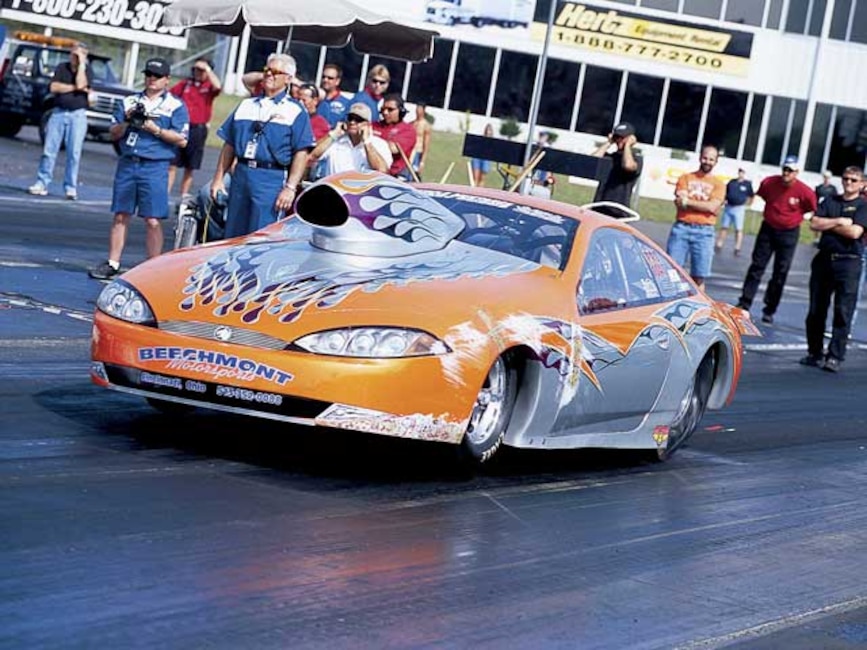 Things got ugly for Chuck Simons during qualifying when his Cougar went out of control at the end of a qualifying pass, spinning backward and flying through the air. Eventually the car landed on all four wheels, with the only damage being to the paint and the wheelie bars, which banged against the wall.

The Southeast is known as a hotbed of ultra-quick, 10-wide Outlaw machines. This wild style of drag racing is played out almost every weekend on quarter-mile and eighth-mile strips from Florida to the Carolinas. This region of the country is also home to plenty of fast street-legal Stangs, as well as hordes of Mountain Motor Pro Stocks. Combine these machines and you get a wild weekend of Fordnatics shooting it out for dragstrip supremacy.

More specifically, in April 2005 this madness amounted to three days of action in the quaint hamlet of Commerce, Georgia, as the town was invaded by the Fun Ford Weekend series.

The Atlanta FFW event has been a hit for more than a decade, but recently it has become one of the largest and most competitive races on the schedule. This year's stop was alive with many of the top shootout drivers, who shared the track with more than 110 cars in True Street. Plus, there was a special prize of $20,000 to win in Mr. Gasket Pro, courtesy of AMP Performance.

Racing kicked off on Friday with an all-day test and tune followed by one round of Showdown qualifying. Fans were treated to six-second, 215-mph Pro machines; seven-second Outlaw and Renegade runners; and Drag Radial, Bandit, and Warrior racers going for the bumper.

On Saturday we followed the seemingly endless line of 110-plus Tremec/MM&FF True Street cars as they rumbled onto the high-ways of Georgia for the required 30-mile trek. Once back at the track, they cooled down for a bit before the back-to-back racing began. Despite the street-legal requirements and the lack of tuning after the road tour, no less than four racers were clocked in the 9s, while one, Nick Yarber, ran in the 8s on each of the three passes. His winning average was a blistering 8.62.

With 20 grand up for grabs in Mr. Gasket Pro, 15 big-tire machines rolled to the line packing nitrous, mountainous cubes, and plenty of boost. The racing was intense, with the first three cars running in the 6.40s and a total of 11 drivers in the 6s. Nighttime qualifying was awesome, as Mike Herring, using nitrous and a Fulton big-block, set the pace at 6.475 with a speed of 214.89 mph. Herring made his mark early in the session and only Doug Mangrum came close, riding his tail with a strong 6.476/214.79 from his ProCharged machine.

In eliminations there were many strong runs, but by Sunday afternoon the last men standing were pole sitter Herring and number-three qualifier Richard Pendland.

In the final, Herring grabbed the holeshot and then blasted to a 6.543 to hold off Pendland who ran a near-identical, but slower, 6.548. The margin of victory was 0.030 second, or about 3 feet. For winning from the the top spot, Herring grabbed the $1,000 posted by Mickey Thompson Performance Tires Pro Challenge Lottery.

Amazingly, Simons came back to run eliminations, where he knocked out the number-four qualifier, defending IHRA Pro Stock champion John Nobile (6.53 to 6.57), in round one before losing to Tony Gillig in round two.

Mike Herring dials in the clutch on his RJ Race Cars Mustang. The red rocket is powered by a 698-inch Fulton motor that gets three stages of nitrous and is backed by a four-speed Lenco.

The '03 FFW Pro champion Tony Gillig qualified in the fifth spot with a 6.53 pass. He defeated Randy Eakins in round one and Chuck Samuel in round two before losing to eventual winner Mike Herring in the semis.

Brit Floyd (near lane) put up a good fight in the opening round of Pro running a 6.65, but it wasn't enough to hold off Richard Penland who ran a quicker 6.60.

Bill Glidden stole the ProCharger Outlaw show in qualifying with a blistering 7.06 at 194 mph.

Like Herring, Bill Glidden also won from the pole, taking home the winner's purse and the $1,000 Aeromotive Lottery Challenge money in ProCharger Street Outlaw. Glidden ran a string of 7.0- and 7-teen elapsed times before nailing a 7.10 in the final to beat Jimmy Keen.

While the racing was hot in the top two showdown classes, the sizzle ran all the way through the remaining categories. In Renegade, Dan Schoneck brought out a new ride and set the class record at 7.81/171.23, but inconsistency knocked him from eliminations. Meanwhile, brothers James and Jimmy Black of South Carolina battled in the final frame. James used his starting line prowess to stage quickly and take a big holeshot. The starting line lead was just what he needed to hold off the quicker Jimmy for the win (8.37 to 8.29).

Matt Jones continued his dominance in Edelbrock Street Bandit, winning for the third time this year. Jones has been on his game, setting a championship-winning pace. Using his new Liberty transmission, John Scaro showed his hand in Warrior, beating hot shoes Darrell Peterson and Jeremy Martorella. The popular Gary "G-Man" Youngblood was not to be denied at his home track, taking top honors in Mod Motor, which made car owner Chip Havemann very happy.

Ah, yes, Atlanta was indeed hot and so we've included a few extra pages and tons of photo coverage for you to enjoy. In addition, we have listed the Top 25 in Tremec True Street and all the event's race winners.