MM&FF's first shoot-out of the year was undoubtedly a suc-cess. Never before have we witnessed so many clutch drops with so little breakage. Engines singing at 6,000 rpm and then--bam--they're heading down the track.

Our first shootout was spurred by a forum thread on www.modulardepot.com, where the naturally aspirated Two-Valve lot was having quite the discussion about their cars, and one of our former shootout winners alerted us to this intense debate. So there we were in the editorial meeting deciding what shootout to do first. It only made sense to accommodate these hard-core gearheads, and the results were pleasing.

1. No power adders of any sort.

2. Overdrive automatic or manual transmissions only.

4. Cars/drivers must possess all required safety equipment per NHRA rules for elapsed times.

6. All cars must be muffled and not be louder than 94 decibels. No open headers or bullet-style mufflers.

As customary, we had a few people drop out of the competition prior to track day. Amy Friedel of Texas had to opt out when her 12.0-capable colt was involved in an accident that caused damage to the car's chassis but thankfully not to Amy.

Dave White of Monroe Township, New Jersey, was upping the ante of his 12.29-second ride with a new intake, but he was greeted with some horrible sounds upon startup. Mass quantities of coolant in the oil pan didn't stop him from coming to the track and helping out, though.

Alex Posegate found himself battling flood-level waters at his homestead after being drenched with a few days' worth of rain. The shootout would go on, however, as we had a few people step up and fill the spots to leave us with a full field.

In addition to posting on the Modular Depot site, we also dropped a few hooks in ModularFords.com and SVTSnake.com. Why the Four-Valve site you ask? Well, the folks there know quite a few people, so we always drop them a line whenever we have a shootout. The scheduled timeframe did not allow us to make a mention in the magazine, but you'll want to check out this month's Horse's Mouth, as well as future editions, as we will be posting upcoming shootouts.

As far as the rules for this event were concerned, we caught some flak by not inviting some of the fastest known Two-Valves in the country, but we really wanted to limit the shootout to street cars. MM&FF covers more than 15 racing events each year, so there are already plenty of drag cars in these pages.

Many of our participants made some lightening modifications, but we are confident that our rules and subsequent choice of vehicles represents what can easily be accomplished by the average gearhead. Now that we have all the pleasantries out of the way, let's get down to business.

Burnt out on racing his low-11-second LX 5.0, Mike Bowen eventually purchased this '01 GT with the intent of keeping it a weekend-road-trip and occasional commuter car. "After the very first pass down the dragstrip in it, it was back to business," Mike says.

Four years later and with just a tad over 18,000 miles on the odometer, this Mustang is pounding out 293 hp and 310 lb-ft of torque at the wheels. This was accomplished with a virtually stock Ford Explorer engine and a set of aftermarket camshafts. The Explorer aluminum block shaved off some 90 pounds from the front end, and Mike has made other efforts to jazzercize his colt to a svelte 3,066 pounds with driver. 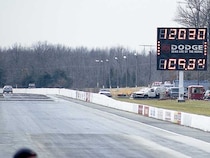 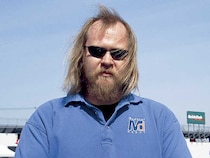 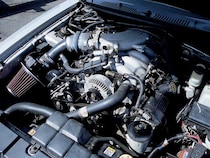 Tony Whetstone's Mustang is an exercise in how to get the most from your Mustang, as it has run 12.77 on street tires with just bolt-ons. Since then, the Pony has progressed to its current state, where it serves drag duty in Fun Ford's Street Stang class. Tony's ride is another low-mileage, quarter-mile killer as well, with only 33,000 miles on the ticker.

Anyone willing to make a 26-hour haul to our shootout definitely has some screws loose, but all the important ones under the hood were nice and tight. Mike Horne convinced his employer, Tommie Vaughn Motorsports, to give him a week off, and then he wrangled his buddy Brian Metzger of Texas Hotrods to haul his car to the Garden State.

As it turned out, Mike also provided one of our alternate cars, which belonged to his roommate, Patrick Thompson. Brian's reward for hauling both cars up from Texas was piloting Patrick's Mustang since he couldn't make it himself to our event. Mike informed us that after our shootout at E-town's test and tune, his Stang cracked off a 12.05 at 110 mph with a 1.61 short time.

Justin Dike (pronounced "deekay" for the English majors in the crowd) got bitten by the track bug behind the wheel of a '98, ahem, Honda Prelude, but he quickly realized just how much he would have to invest to get the two-seater just into the 13s, so he traded it for his current Mineral Grey colt. "I always wanted a Mustang," Justin says, "but I can be dumb with the throttle sometimes, and it was this dumbness that kept me from buying one until I was ready."

Springs, a shifter, and MAC's ProChamber pipe got the car into the 13s, and it was all downhill from there. Now making 285 hp and 299 lb-ft of torque to the wheels, Justin's Mustang has come a long way and did so on the stock 16,078-mile long-block.

"I'd like to thank my mom; my girlfriend, Aisha; Joe Marshall; and Randy Stinchcomb," Justin says. "Without you guys, I couldn't have made it here."

Patrick Thompson's Mustang was one of our alternates, and it did well with Brian Metzger at the wheel. Knocking down numerous miles as a daily driver, the GT was purchased new and has certainly been bitten by the bolt-on bug, while still maintaining its street manners.

When Lewis Bohr's Mustang showed up with its nitrous-oxide kit still intact, we made sure all the competitors got a good look at it to verify that there was indeed no bottle hooked up.

Having had a couple of classic Mustangs, Lew was ready for a change and purchased this '02 GT brand-new. To this day, the car has only 10,000 miles on it as it sees mostly strip duty.

Originally equipped with an automatic, Lew tossed in a stick to improve the fun factor, but the clutch was a little weak at our shootout, preventing the Pony from performing to its potential.

Further performance improvements followed, culminating in a LaRocca's Performance-tuned, Vortech-supercharged 460-rwhp Mustang. Tomas decided to take it back to naturally aspirated form to be more consistent for Fun Ford's Mod Motor class, which he intends to run this year.

"I always wanted a Mustang," Tim Singleton says, "so I just decided to get one." It's as simple as that sometimes. This '99 model had a ProCharger P1-SC on it at one time and produced 400 rwhp with it.

The combination lasted about a year, until the motor let go, at which time Tim decided to sell the blower and put the money toward a new stroker engine, which incidentally was the only one in our shootout. No, he didn't decide to go naturally aspirated as he has plans for a pair of 57mm turbochargers.

How often do you find the car you've been looking to buy driving right in front of you? Probably never, but that's how Jim Richards of Virginia Beach found his '00 Mustang GT.

Once Jim finally had the Mustang he wanted, money came slow for the mods. When he saw that there were naturally aspirated Two-Valves running 11s, he decided that was the way to go. With help from Sean Kelley at MAS Racing Development (below) and Kimnach Motorsports, Jim is almost to his goal of 11s or better.