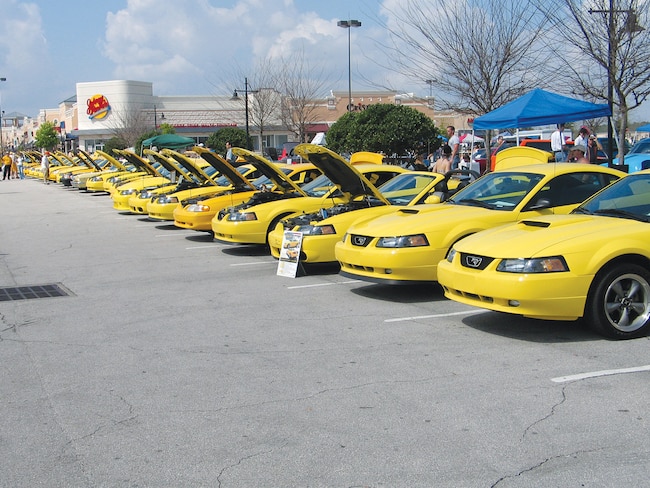 We've long known that Mustang club guys are serious about their cars. But if there's one group that takes the cake, it's yellow Mustang owners-particularly those who are members of the Yellow Mustang Registry. The yellow crazies converged in Orlando on March 21 at Waterford Lakes Town Center for a show, and we actually made it out with our yellow 3g GT project car. The show was the culmination of a week of club events in Orlando, with part of the show's proceeds going to the Cruisers for Kids charity.

Naturally, YMR founder Steve Shraeder was on hand for the show, and his pal Chris "Pappy" Rhodes was there to coordinate things. In all, 60 yellow Mustangs were there. Every-thing from a Spring-time Yellow '65 to a Screaming Yellow '04 Cobra was on display. But these weren't just local cars. These YMR folks are serious.

Some made the trek from as far away as Arizona and Michigan to hang out with their yellow brethren. Among the long-distance award winners were Clark and Shelley Spencer of Phoenix, Arizona (2,140 miles one way), Ralph Herwig of White Cloud, Michigan (1,350 miles), Jay Hayden of Clawson, Michigan (1,200 miles), Gary Kohn of Canton, Michigan (1,180 miles), Lyn Walter of Hurst, Texas (1,170 miles), Charles Drake of Waxahachie, Texas (1,160 miles), and Santina and Steve Flynn of Hackettstown, New Jersey (1,075 miles).

If you have a yellow Mustang and want to get in on the action, or you just want to see what this wild bunch is up to, check out www.yellowmustangregistry.com.

California Scheming As we write this, California currently has a law that exempts all vehicles 30 years and older from emissions testing. It makes a lot of sense because few of those vehicles are still on the road, and most of them are enthusiast cars that are driven only on weekends. Unfortunately, legislation (A.B. 2683) has been introduced in the California State Legislature to repeal the state's current rolling emissions test exemption for vehicles 30 years old and older.

A.B. 2683 would repeal the current pro-industry, pro-hobbyist exemption and replace it with a law requiring the permanent testing of all '76-and-newer model vehicles. Of course, the big polluters such as utility companies and oil refineries are looking to take advantage of blaming old cars for the pollution.

If you like the law the way it is and you live in California, you might want to let your representative in the California assembly know. For more information, check out www.enjoythedrive.com.