The Threat Of Rain, Repeated Wrecks, And An Urist/Millen Duel Kept Us On The Edge Of Our Seats At World Ford Challenge 6 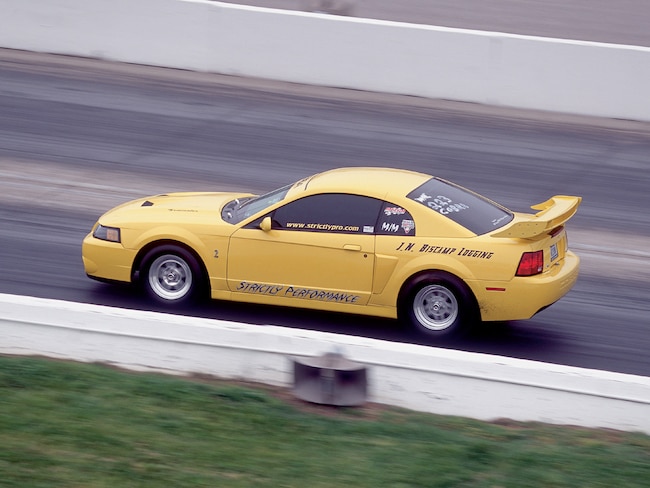 Horse Sense:
With each successive year it becomes more difficult to meld the rules of the competing Fun Ford and NMRA sanctions to produce a workable playing field for racers from each sanction to square off in St. Louis. Nowhere was this more evident than in Pro Street Outlaw. At FFW the cars are running less weight, W tires, and bigger turbos than their NMRA brethren. The compromise for WFC was limiting turbos to 94 mm, lowering the race weights, and making all the cars run on true 28x10.6s. Still, many NMRA Outlaws couldn't slim down to WFC weight. 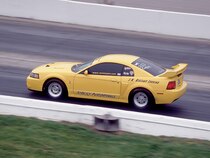 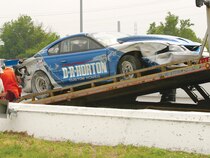 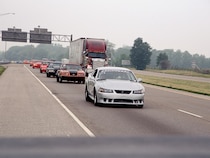 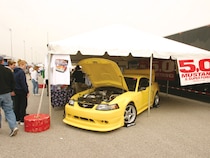 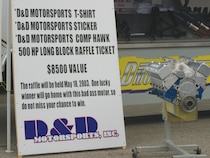 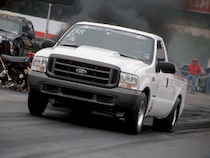 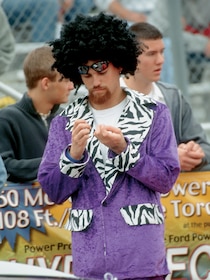 Drag Radial
Big Daddy Dwayne Gutridge made his first-ever trip to the World Ford Challenge to do battle in the new Drag Radial class, and he had a new sponsor with Leading Edge Lubricants as well. "I'm just happy to have a class to race in at the World Ford Challenge," he says. However, Dwayne wasn't happy about his transmission when he pulled through the gates since he had just grenaded it on the dyno before leaving home. He got it back together only to blow the transmission's forward band twice in qualifying. After scratching his head and talking to Performance Automatic's Harvey Baker, Pro 5.0 racer Chuck Samuel overheard the conversation and suggested checking the transmission's forward drum, which someone had turned down just like Chuck had questioned. With the proper forward band installed, Dwayne got it in gear with his new BFGoodrich Drag Radials and Weld wheels and blasted an 8.55 at 164 to qualify in the top spot. With just six cars in the running, Dwayne took out his buddy Big Bob McDonald, had a bye, then beat Jimmy Byrne to the stripe with a slippin' and slidin' 8.90 at 165 mph to Jimmy's 9.26 at 152 mph.

To say Gene Hindman's really peeved would be the understatement of the racing year. At each NMRA race this year, he's had the fastest car, but he's never tasted victory as of yet. For WFC6, Gene simply pulled weight out of his car and added good gas for Sunday. He said he doubted the car would run a 10 in quali-fying. Yeah, whatever, Gene. He busted out a 10.69 on his first qualifying pass. He sandbagged on Saturday to get the second qualifying spot behind Ron Anderson (those Hindman boys aren't stupid), which he saw as an advantage. He took out Andy Burnett with a 10.65 at 118 mph (notice the low mph), Jon Carls with a 10.61 at 126 mph (that's more like it), and then had a bye run 10.57 at another 126 mph. He ran slightly quicker in the final against Dwayne Barbaree with a 10.56 at 126 mph, but Dwayne's 10.59 at a matching 126 mph was enough to continue Gene's frustration thanks to Dwayne's slightly better reaction time.

Factory Stock
The '03 Mach 1s are beginning to show some dominance in the ranks of Factory Stock, with the Paul's High Performance- prepped Mach 1s of Jeff Schmell and Brian Marr taking the win and runner-up spots at WFC6 this year. Jeff's black Mach (built without Mach 1 stripes, no less), sporting Bassani Mid-Lengths, gears, and a few other goodies pushed through the small but close field of Factory Stock racers running mid to low 12s. First-round eliminations had Jeff paired with John Leslie Jr., but John couldn't muster anything near his 12.56-qualifying run after recovering from a broken trans. Jeff took the win when John broke his driveshaft. The second round saw Jeff with a bye run to put him into the finals against his teammate and coworker Brian Marr. Jeff's slightly better reaction time helped him out of the hole with identical 60-foot times to Brian, but it was Jeff's top-end charge that got him past Brian by barely a car length at the stripe with a 12.24 at 111 to Brian's 12.28 at 112. At one point, however, the Mach 1s were contested due to their Bassani Mid-Length headers.

Brian Marr's first pass down the 1,320 was just about a year ago at Atco. Since that time he's seen his coworker Jeff Schmell purchase and race an '03 Cobra (being built for Wild Street duty now) and recently an '03 Mach 1. Jeff talked his pal Brian into joining him at the races, and the Michigan duo drove all the way to Florida to pick up Brian's Mach. Nearly identical to Jeff's in performance upgrades, Brian's Mach fared well in the small Factory Stock class at WFC6. Brian sent Jason Creamer back home to Indiana in the first round and then took on Factory Stock regular Tim Duncan in the second round. Tim had the better reaction time, but Brian was able to power around him with the Mach's four-cam song, putting him into the finals with his bud Jeff Schmell. It was a close race for most of the track, but Jeff was able to get by at the big end for the win.

Open Comp
It just wouldn't be the World Ford Challenge without the Hindman brothers, and since his brother faltered in Pure Street, Robert had to uphold the family name in Open Comp. Robert usually runs modular, but since Open Comp runs the same format and pays another $1,000, he took his consistency to the bigger payout and made it work. Robert ran a 12.24 dial-in and ran as close to it as he needed to all weekend. When it came to the last two money rounds, he reeled off a 12.25 and a 12.26, and his competition just couldn't handle the truth.

Modular Street
Modular racer Lupe Davila battled through five rounds and a full field of modular-powered Mustangs, T-birds, and Cougars to take the win in Modular Street at this year's World Ford Challenge 6. Lupe, running a string of 12.50s on his 12.49 dial-in throughout the weekend put Nance Utter on the road back to Indiana after Nance played Rip Van Winkle and napped at the Tree in first round eliminations. Second- and third-round elims gave Lupe a chance for a quick breather as he took a bye run in both to put him solidly into the fourth round against Shawn Johnson and his screaming yellow T-bird. Lupe ran closer to his dial-in than Shawn, and his excellent 0.419 light gave him the win and put him into the finals with Accufab's own John Mihovetz. John's ultraclean '93 Mustang was running a 4.6 with lots of boost, and it put the little notch solidly into the low 9s. But again, it was a better reaction time and a closer dial-in that got Lupe into the winner's circle to take the Modular Street crown.

Cobra Challenge
Past Pure Street competitor Tom Kreisler competed in the '03 Cobra Challenge at WFC6. He qualified in the sixth spot, but with the bracket-style Cobra Challenge Class, that didn't much matter. His reaction times weren't the greatest (averaging 0.836 lights in eliminations), but he ran close to his 11.98 dial all day to take out Richard Lelsz, Josh Horton, and Jay Graham in the final. Tom's Cobra features a 2.80 blower pulley, a Metco 100mm idler pulley, a Bassani X-pipe, a MagnaFlow after-cat, and a DiabloSport chip. All mods were added at the track for the race. Tom still had the temporary tags on the car as he'd purchased it only a couple weeks before WFC6. He plans on adding a Kenne-Bell blower, Bogart wheels, and slicks. "I haven't done anything this fun in a while," he says.

Street and Pro Lightning
In the Lightning classes, we saw the contrast of the modern trucks and the old square-body Lightnings. In Street Lightning, Frank Likert put his '02 Lightning on the map despite sleeping at the lights versus Bob Abramovich. Meanwhile, in Pro Lightning, Paul Duckett took his nine-second square Lightning to the cash.

Diesel Challenge
Open Comp-style classes really back up that old tortoise-and-hare story, because while David Lott was grabbing all the headlines with his 13-second truck, Doug Krout was practically nailing his 16.04 dial-in on every pass. That was good enough to take him all the way to the winner's circle.

The 1982 Mustang GT represented a new beginning for Mustang performance. Click here for more details or check out the June 2012 issue of Mustang Monthly Magazine

Bill Wagner's unconventional 1982 Mustang GT is a star on and off the track. Click here to learn why or check out the June issue of Muscle Mustangs & Fast Fords Magazine

There is no greater bond in this world than a man and his mustang! Joe Huerta is proof of this as he and his 1982 Ford Mustang GT have been together for 28 years! - Muscle Mustangs & Fast Fords

Read up on some hidden treasures we've managed to find while on a mission to hunt for old cars, Mustang-style. More details along with photos only in Mustang Monthly

We brought thirteen E85 charging Ford Mustangs for our E85 Challenge at the Gateway International Raceway drag stip, cranking up the boost and compression thanks to the high octane and cooling characteristics of the E85. - 5.0 Mustang & Super Fords Magazine