If you’ve never been to an SAAC convention, put one on your “must do” list for next year. You never know who you might cross paths with in the host-hotel bar. 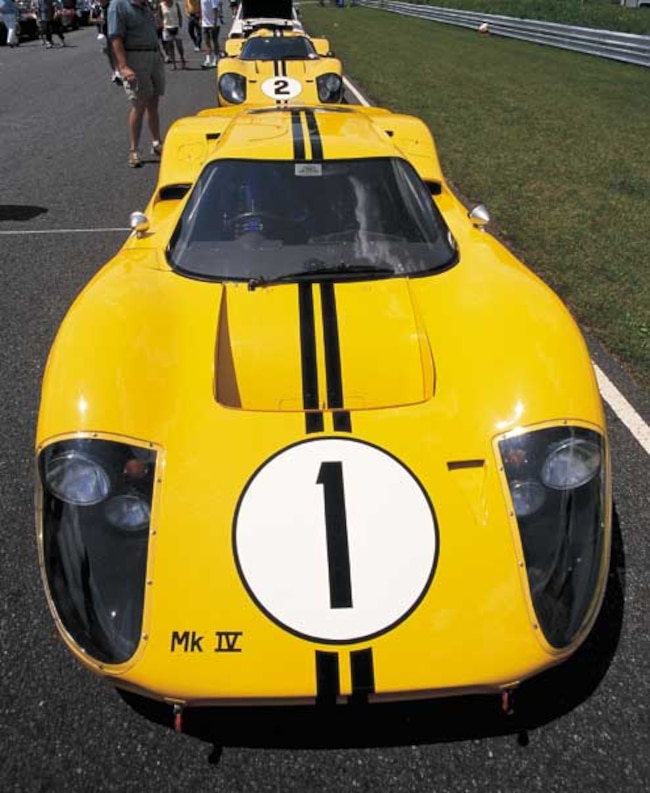 Nowhere else but at SAAC might you expect to find two original yellow GT40 Mk IVs sitting nose to tail. George Stauffer’s No. 1 car, in front, won the Sebring 12-hour race in 1967, with Mario Andretti and Bruce McLaren behind the wheel. It was found, along with other GT40s, stored in crates in Belgium in 1983, and restored back to its Sebring form by Stauffer Classics. 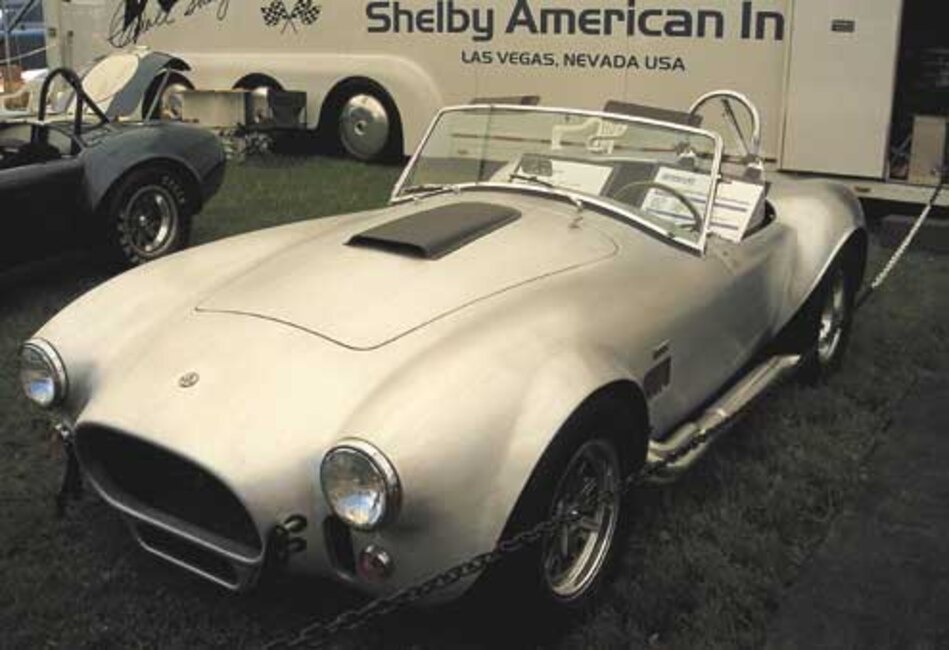 In the market for a new “real” Cobra? Well, Joe Tignanelli beat you to this one, CSX No. 4161, but if business has been really, really good lately, a brand new, aluminum-bodied 427 S/C is only a phone call to Shelby American away. Go ahead, you only live once… 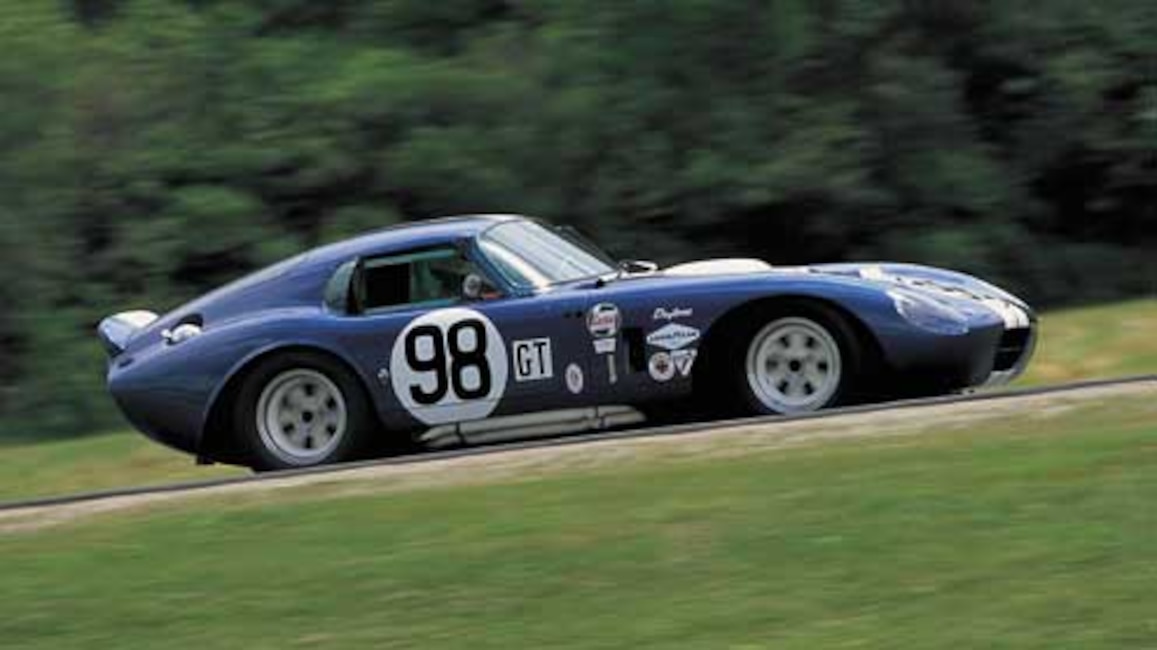 The Daytona Coupe derivative of the small-block Cobra debuted in 1964 and was designed to put the hurt on Ferrari in the GT World Championship—which it ultimately did. The Coupe’s slick aerodynamics gave it a 20-mph advantage over the roadster. 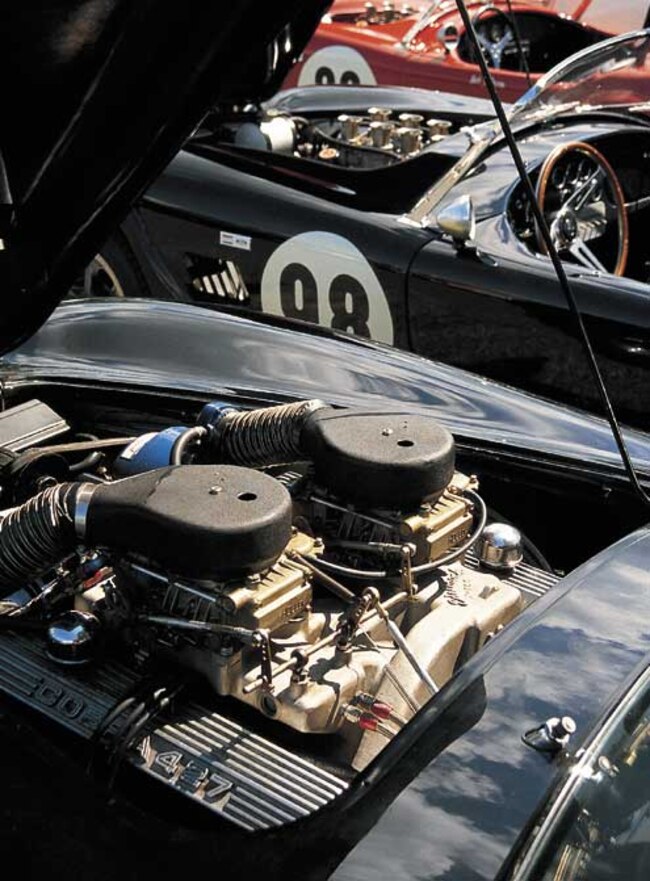 If the old Cobra is more to your taste, how about the one nearest the camera, a one-of-a-kind big-block with each of its Holleys force-fed by its own Paxton-manufactured, Shelby American-labeled centrifugal supercharger? That’s right, an original twin supercharged 427 Cobra. Didn’t Bill Cosby base his old comedy album, 200 MPH, on something like this? 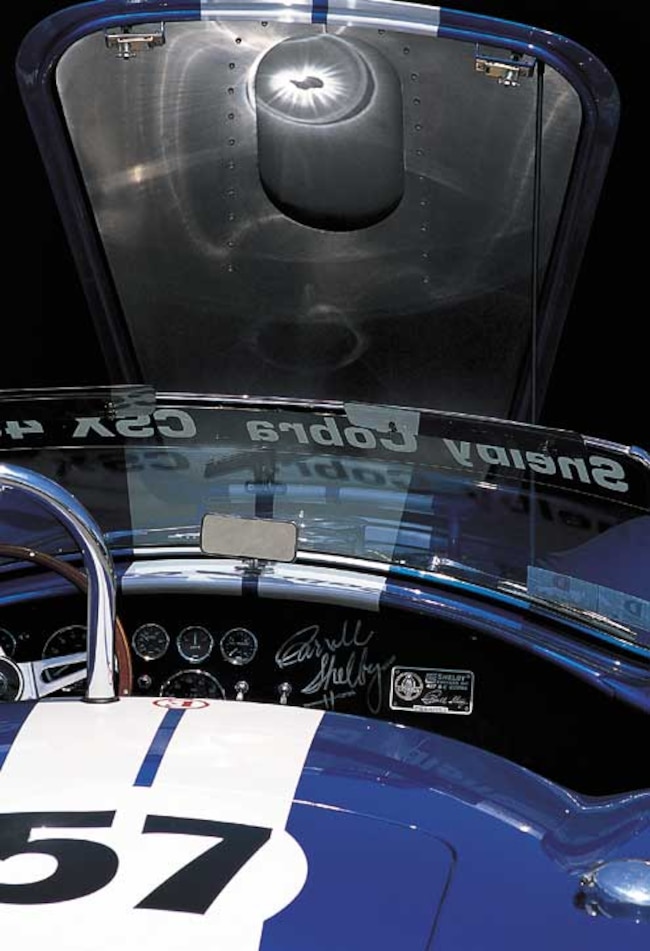 Since this annual shindig exists to honor the accomplishments of Carroll Shelby, it’s not surprising that most of the cars in attendance had been autographed somewhere by the man himself. 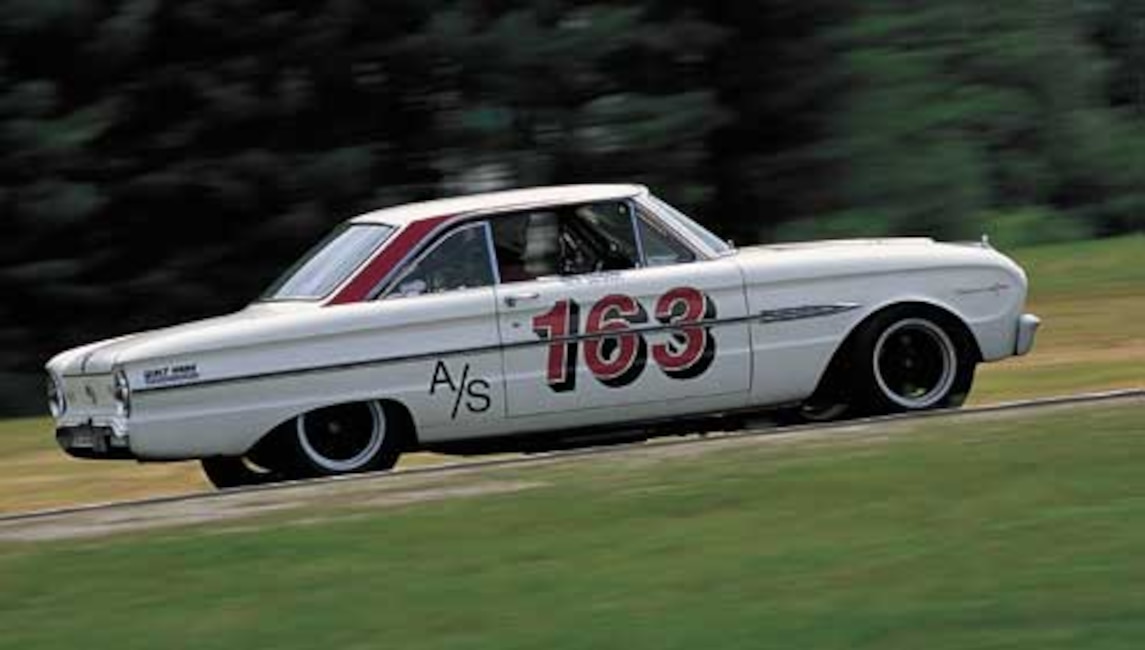 It wasn’t all Shelbys and Mustangs, as evidenced by this cool ’63 Falcon Sprint that looked right at home hunkered down over those fat Torq-Thrust Ds. Though we never caught up with its owner, this compact corner-carver looked as though it had spent the majority of its long life on the track. 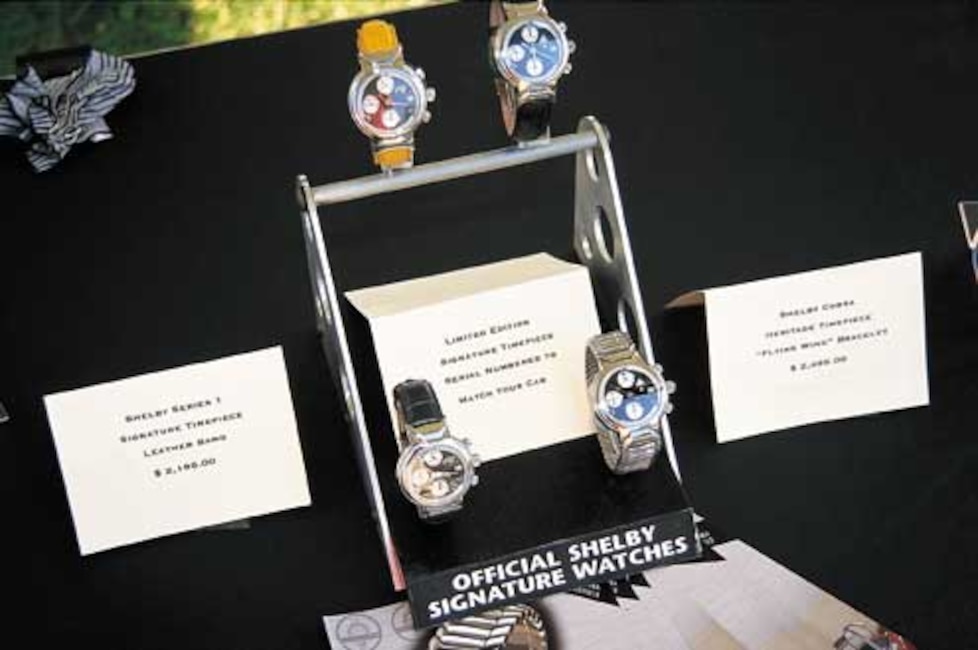 For the man who has everything… 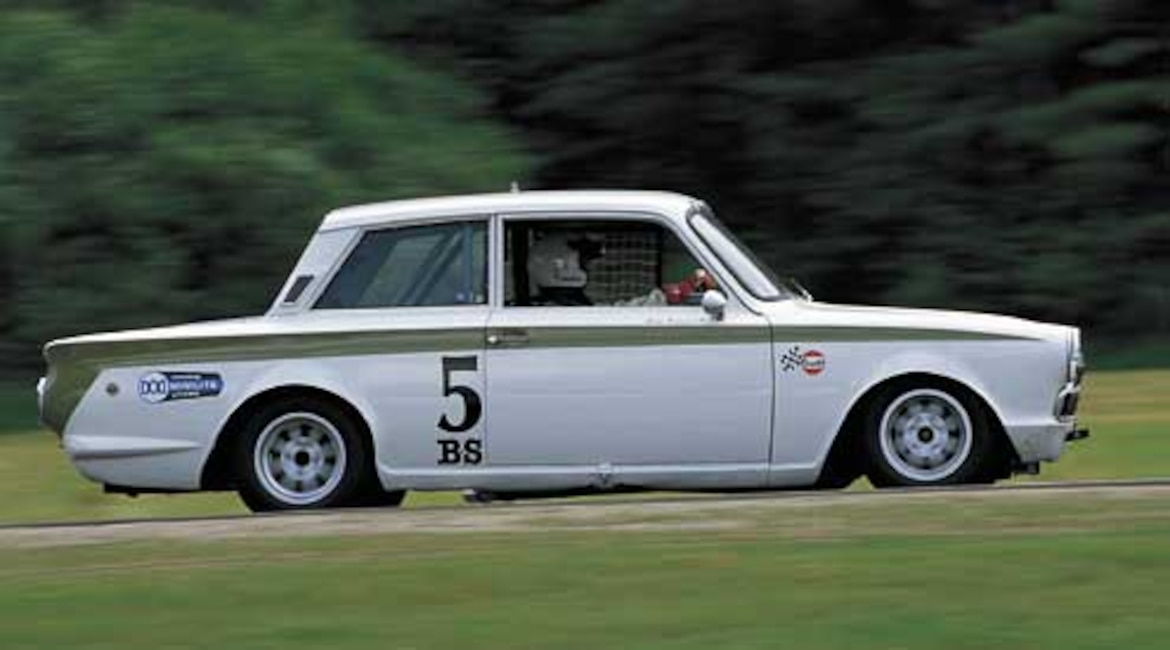 If it raced for Ford in the ’60s, it was likely at SAAC, and not everything housed a thumping V-8. This classic Lotus Cortina positively zinged its way around Lime Rock’s hilly curves, its light weight giving it a decided advantage in the tighter sections. 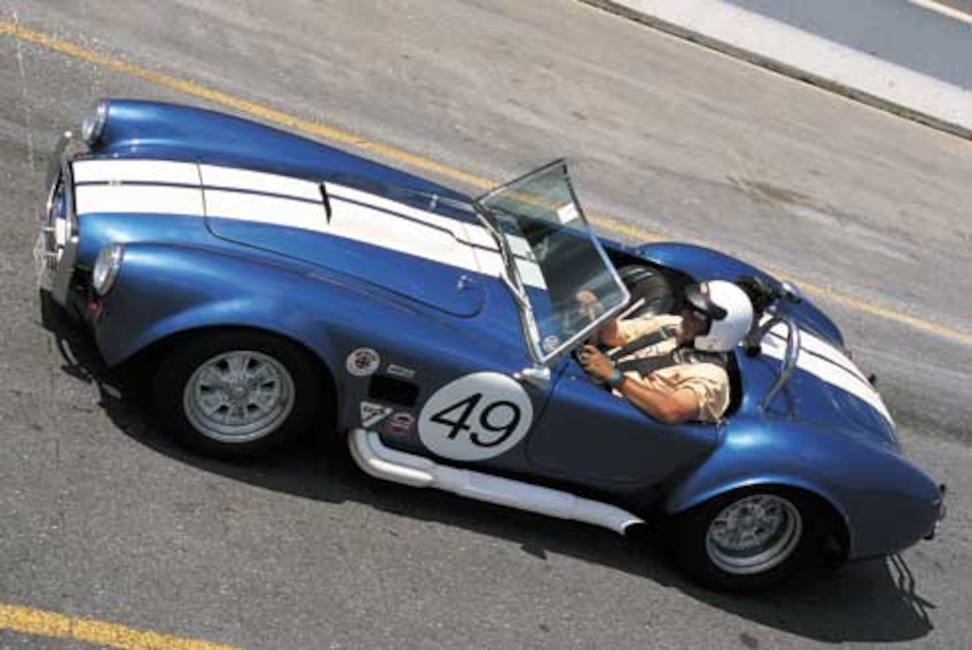 Real or kit-built, there were scads of big- and small-block Cobras ripping about on the track. The real ones had their own race on Monday, July 3rd, and if you think their owners are afraid to push the astonishingly valuable little two-seaters to the edge, think again. These things were born to race, and it’s gratifying to see them still at it.

I had sidled up to the hotel bar, relaxing after a long but pleasant day at the track, when in strolled Carroll Shelby, looking trim and fit and shaking a few hands on the way before joining a couple of friends already seated at a table. His mere presence created a palpable tingle among the patrons in the room. To their credit, all respected the man’s privacy.

It occurred to me that, were it not for that lanky, silver-haired Texan engaged in animated conversation with his tablemates, most in the room would have had no reason to be there at all. For, like me, they were gathered in the rugged northwestern corner of Connecticut to partake of the Shelby American Automobile Club National Convention 25 at Lime Rock Park.

To us, the term “national convention” sounds just a little too formal; maybe “national festival” would be more descriptive, because SAAC’s big annual gathering is to Ford fanatics what the original Woodstock festival was to ’60s hippies: an absolute orgy of sights and sounds. As beautiful as it was to see the unmatched collection of Shelby GTs, Cobras, vintage Trans Am racers, and GT40s in attendance at this year’s anniversary event, it was even more of a blast to hear them thundering around Lime Rock’s 1.53-mile road course—doing precisely what they were built to do so many years ago. Four of SAAC-25’s five days were devoted to track-oriented activities, culminating in a trio of 12-lap races, one for Cobras, one for GT350s, ’65 to ’70 Trans Am cars, and Tigers; and the third for those magnificent, omnipotent GT40s.

But SAAC also draws a large contingent of street and show cars, and the Lime Rock community restriction on starting unmuffled race engines on Sunday was the perfect excuse to use the race course itself as a one-day show field. Thus, fully two-thirds of the track was covered in some of the finest high-performance Fords on the continent. With absolutely ideal weather, spectators poured in, milled around the machinery, and perused a large vendors’ area and swap meet where the only limit on what could be had was the limit on the credit card.

For SAAC registrants, the day doesn’t end when the sun goes down. This year’s Saturday night banquet was attended not only by Mr. Shelby himself, but also by a whole raft of his original Shelby American team members. As you can imagine, with this many hard-core racers/fabricators/crew on hand, it was a very colorful soirée that lasted until well after midnight.

If you’ve never been to an SAAC convention, put one on your “must do” list for next year. You never know who you might cross paths with in the host-hotel bar.