Needless To Say, We Didn't See Many F-Bodies On The Streets Of Charlotte 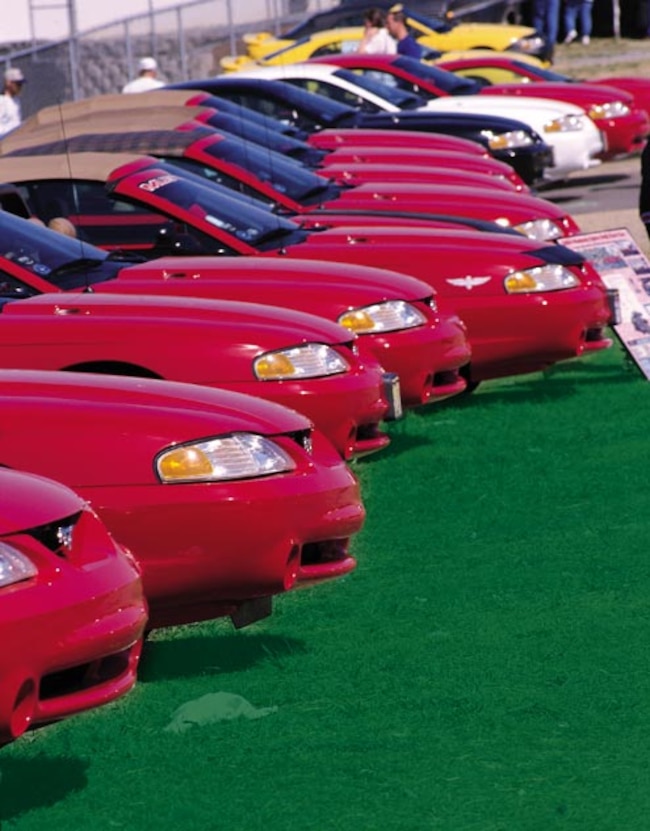 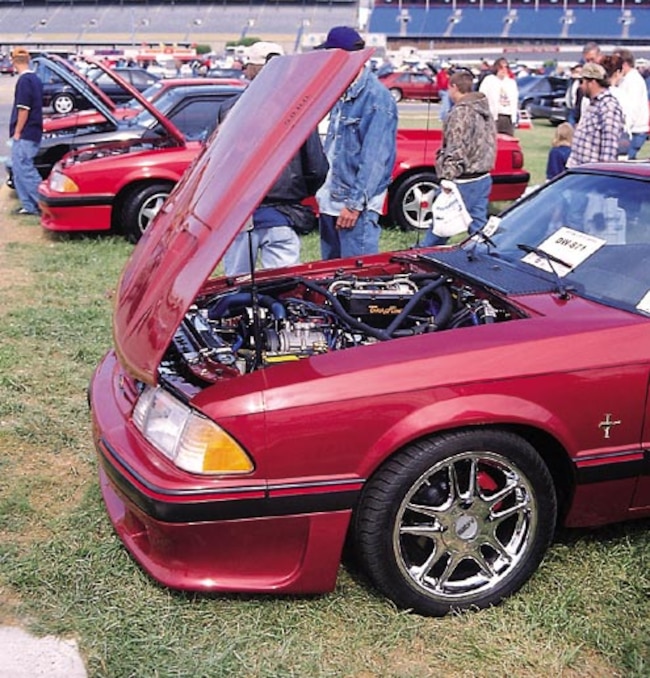 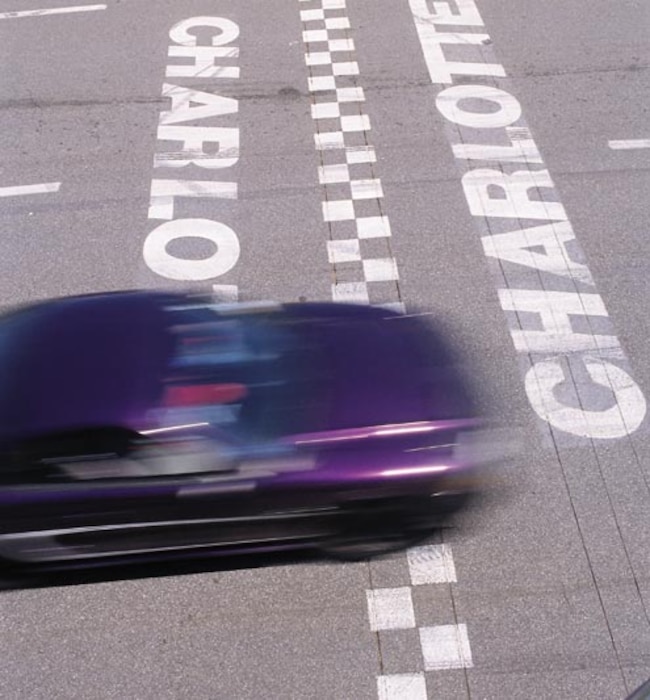 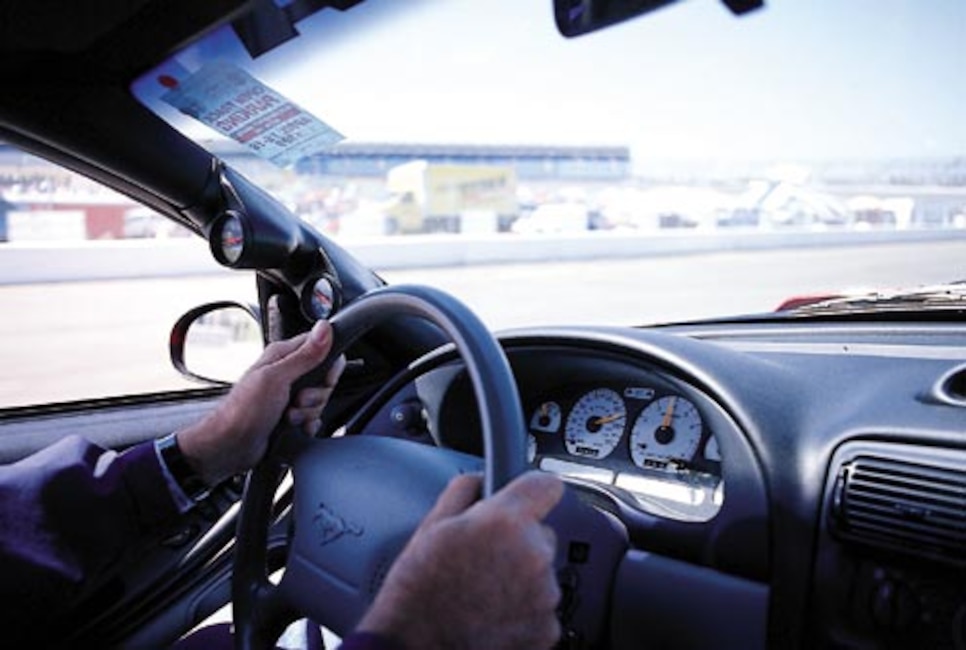 Editor Kinnan pirated a ride from Dario Orlando and his Steeda Mustang. As you can see by the speedo, they reached speeds of up to 120 mph. 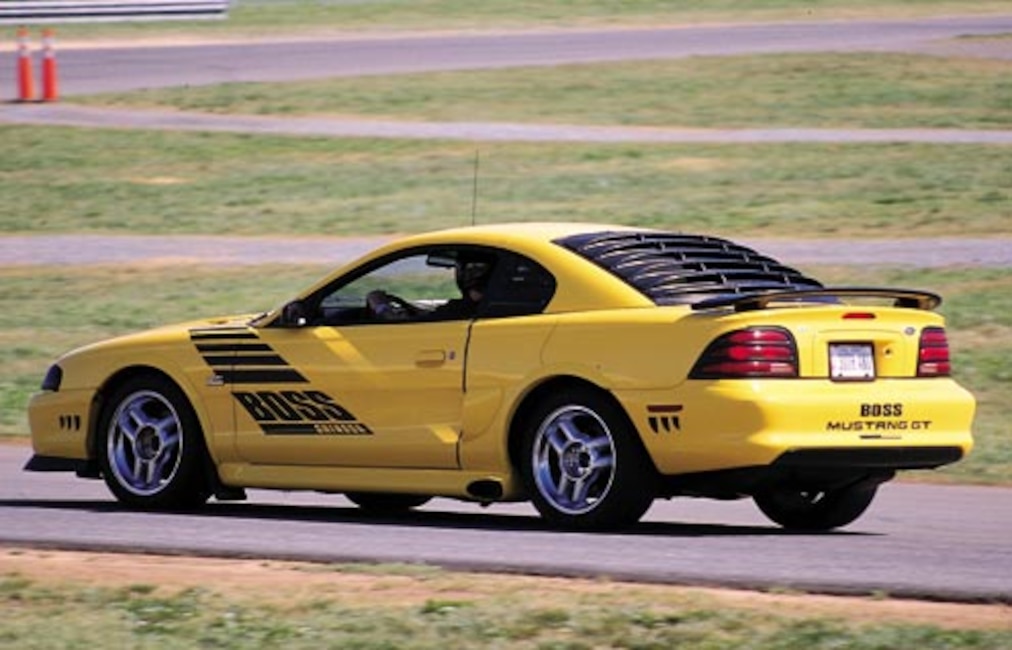 This yellow SN-95 Mustang with Shinoda graphics was representative of many Mustangs out on the track. You didn’t need to have a race-prepped Mustang in order to enter the open track sessions, just enough guts to tackle the high banks of Charlotte Motor Speedway. 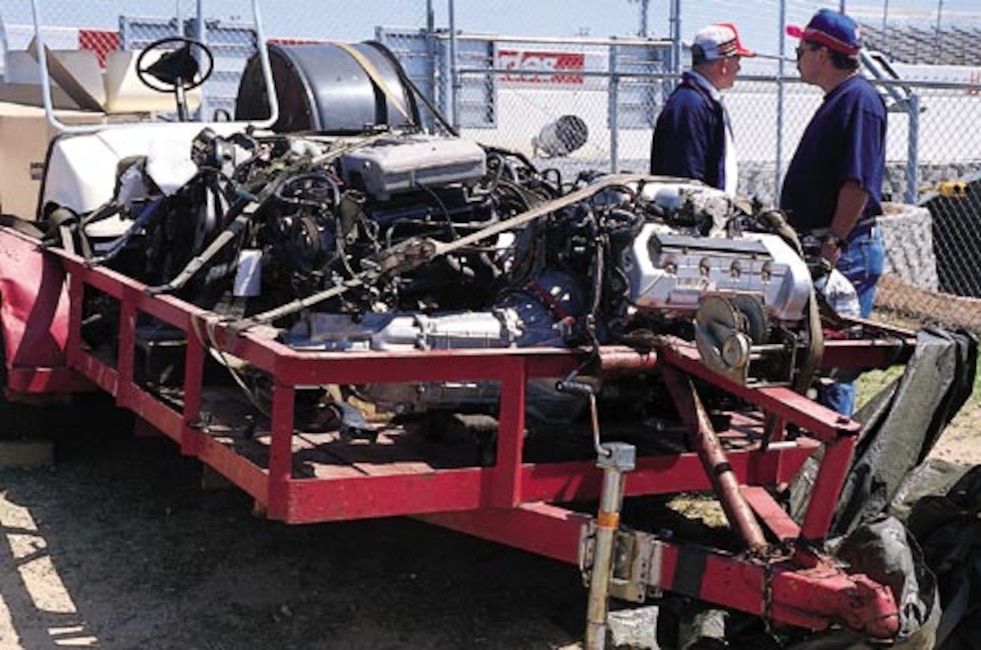 Anyone for a Cobra motor—5.0 or Modular? Mustang Parts Specialties from Winder, Georgia, had parts for Mustangs, as well as complete cars you could purchase at the show. 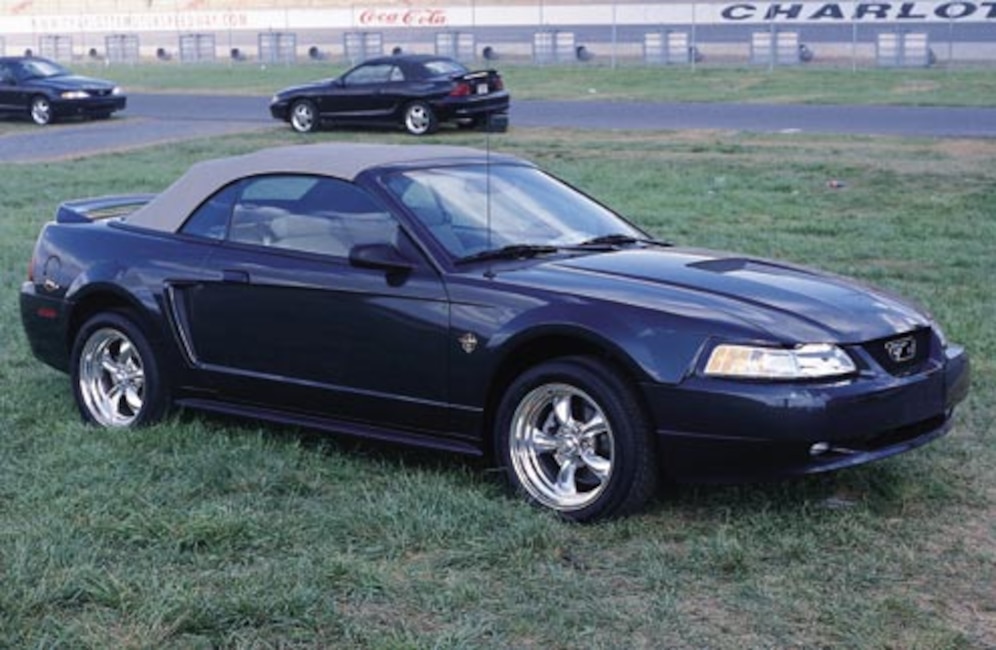 Timeless American Torq-Thrust wheels still look great on the Mustang. We caught this ‘99 GT in the display-only area. Many people were unaware of this area and didn’t know there were more Mustangs to see. These were Mustangs that weren’t being judged. 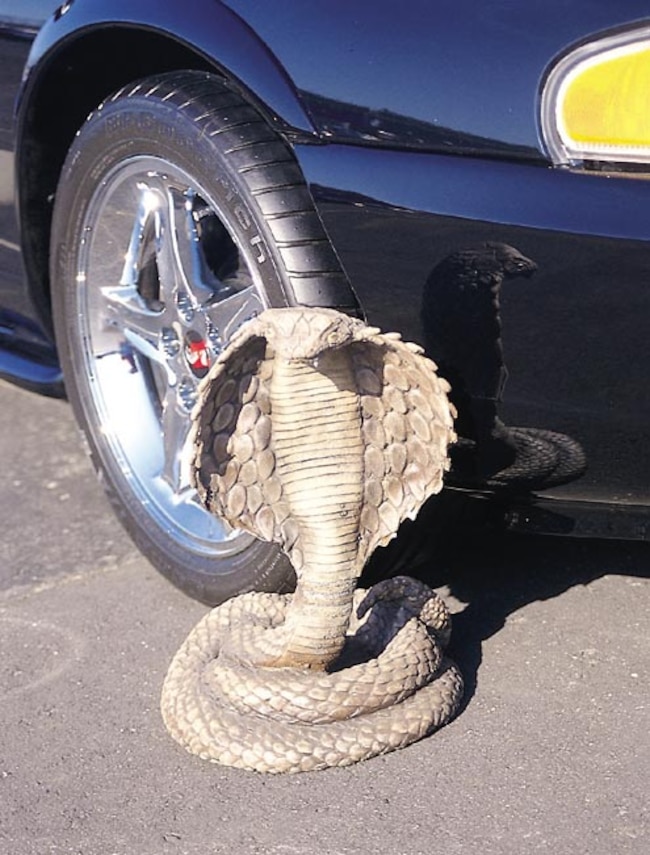 This Cobra (obviously not real) let everyone know what his owner was packing. The actual Cobra Mustang was packing a little extra venom thanks to a Kenne Bell blower. 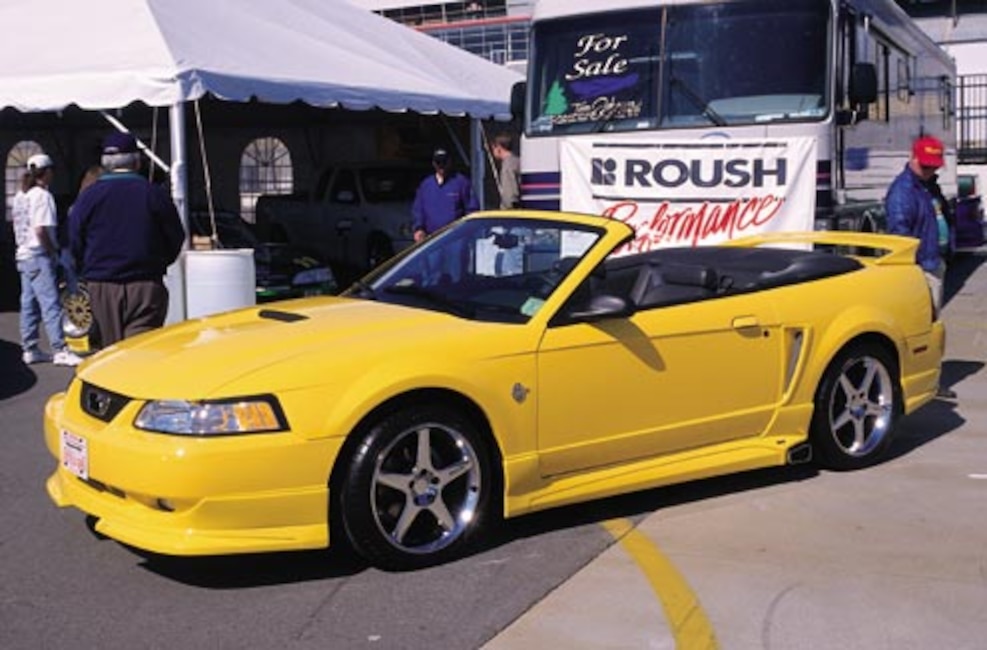 We’re really digging what Roush is doing with the ’99 Mustangs. With a perfect mix of exterior appointments and added horsepower, we would have easily given them $22,000 for the black example we saw. Too bad it still had the factory window sticker on it. 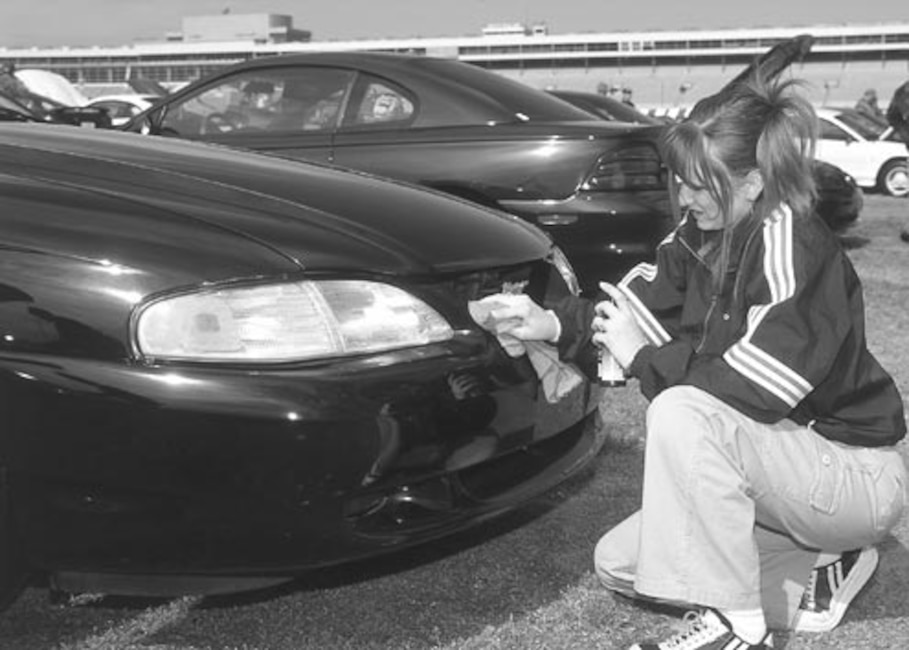 An integral part of getting your Mustang noticed, and getting high numbers when the judges are walking around with their toothbrushes, is washing and waxing your car regularly on the show field. The unusually windy conditions in Charlotte during the show made keeping your Mustang clean an all-day job. 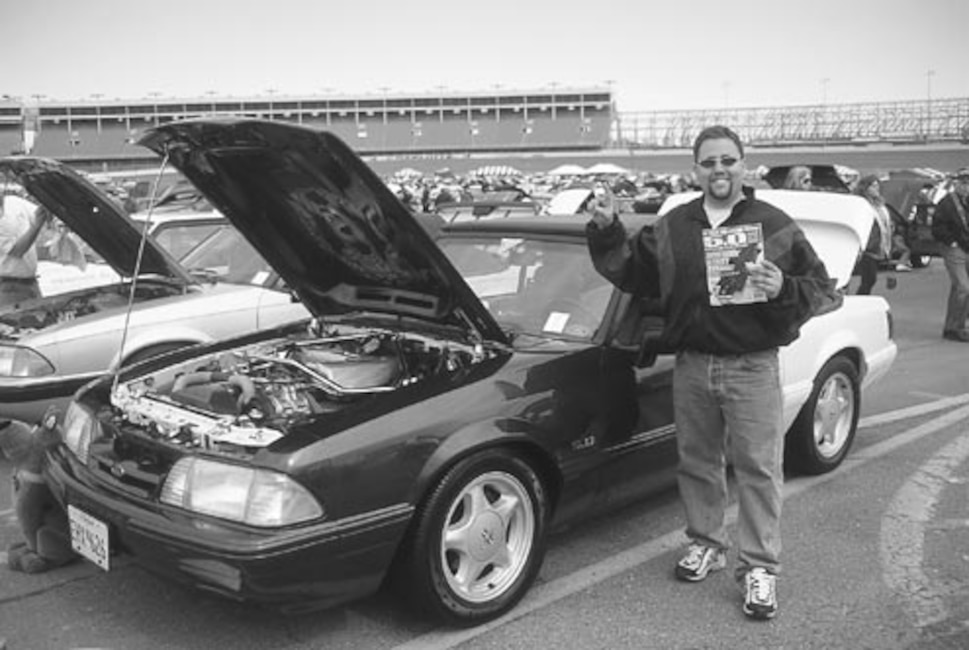 Call this photo a shameless plug if you want to, but another way to get your Mustang into our magazine is to be at the same shows as us. You’ll remember Brian Sam’s convertible from the 5.0 Showcase section in our June '99 issue. 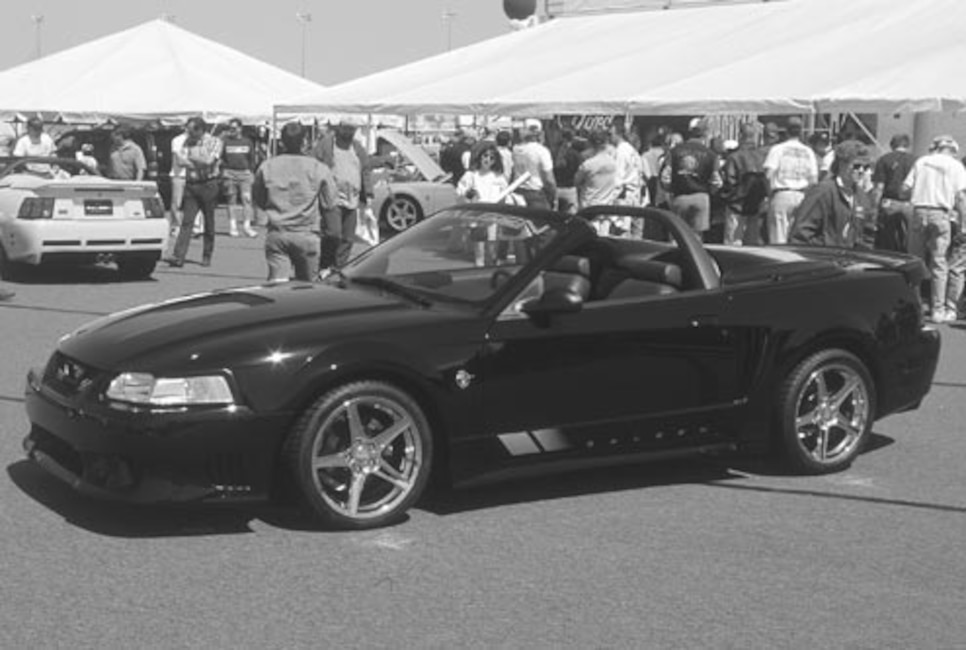 Steve Saleen was at the show with what seemed like every Mustang he has ever built (okay, we’re exaggerating). This ’99 Saleen convertible attracted tons of attention, as did all the Saleen Mustangs in attendance. 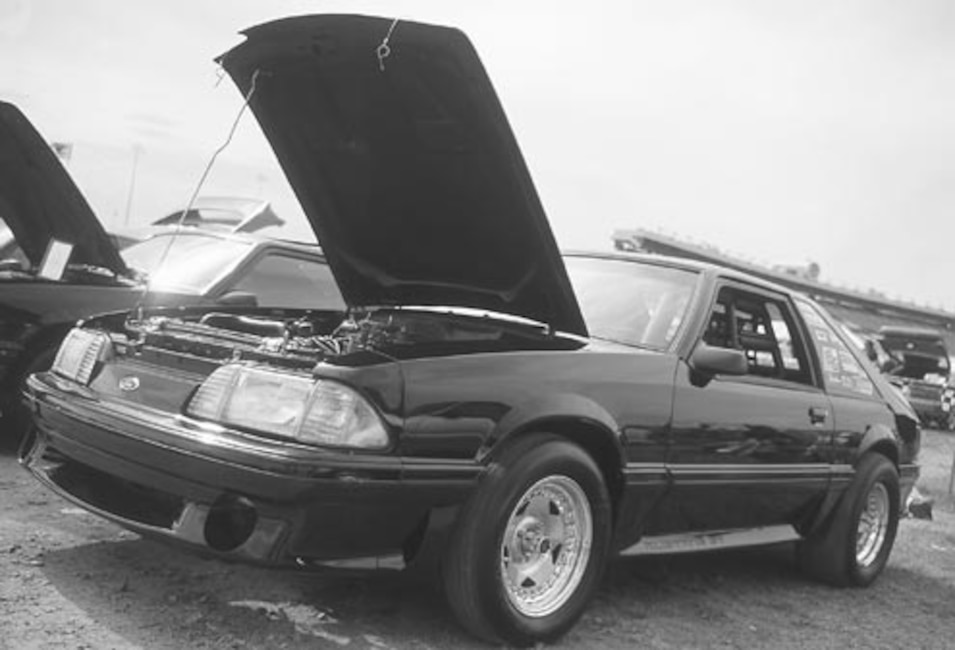 What’s this, a late-model drag ’Stang at an MCA show? We had actually started to find stock Mustangs cool until we came across this fresh drink of a black GT. Late-model drag ’Stangs were few and far between at the show, but that didn’t dampen our spirits whatsoever. There was still a ton of cool late-models to get hyped over. 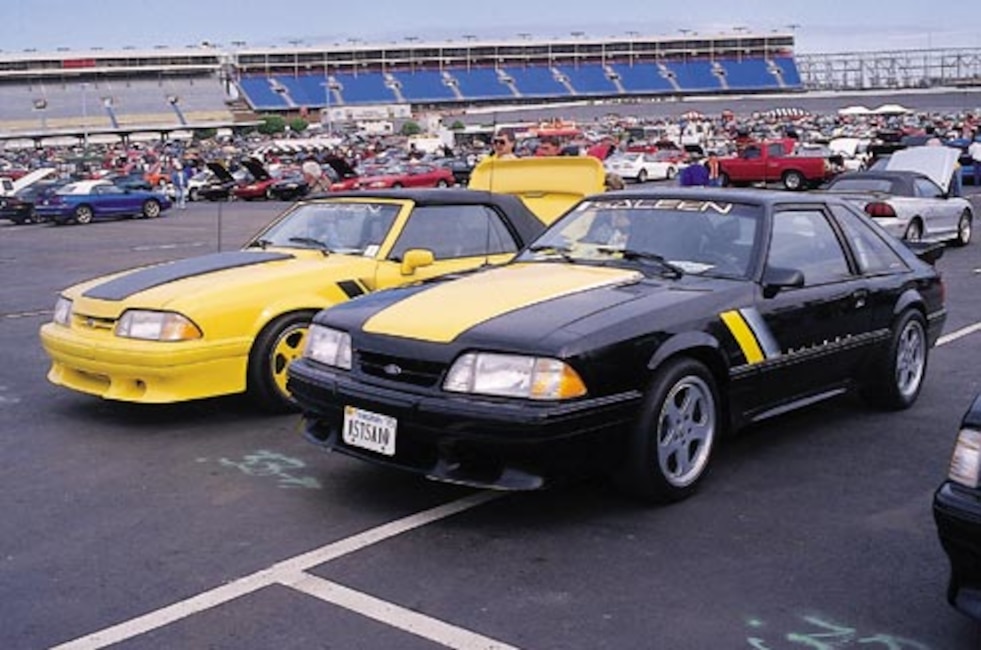 Saleen Mustangs were out in force at the show. This SA-10 is one of nine built, and the yellow convertible is a one-off Saleen SC droptop. 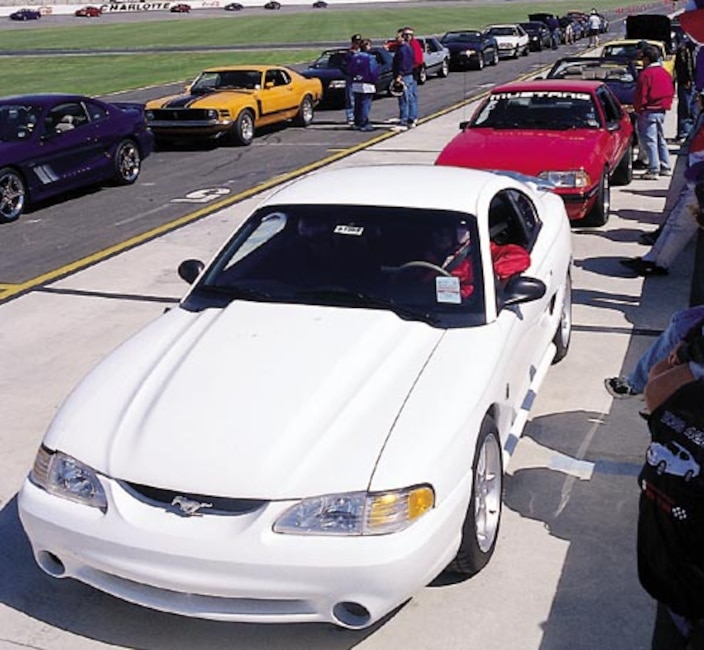 Vintage and late-model Mustangs alike lined up to tear up the track in the name of spent gas and burnt rubber. Different classes were available for those with varying levels of track experience and guts.

The 35th Mustang Anniversary Celebration proved you can never have too many Mustangs in one city. Shelby Mustangs, Saleens, Cobras—everywhere you turned a kickin’ Mustang wasn’t too far away. If it’s Mustang-related, it was in Charlotte, North Carolina, April 14-18. The best thing about this event was that you actually saw a bunch of specialty Mustangs on the street. Once in a blue moon you might spot a Saleen where you live; in Charlotte it was commonplace to see a Saleen on the road, not to mention Shelby GT-350s and other killer Mustang hardware.

Being a Mustang Club of America (MCA) function, the show field was filled with bone-stock 5.0 and SN-95 Mustangs (imagine that, stock). We’re used to seeing Mustangs with blowers, aftermarket wheels, custom paint, nitrous, and the like. We thought stock Mustangs were few and far between until we attended this show. But we found plenty to get stoked over.

The open track sessions were cool to watch. Any Mustang owner could put their pony on the track for hot laps. Editor Rob Kinnan was able to tag along with Dario Orlando from Steeda during an open track session in the 120 mph class. But the highlight of Rob’s weekend came when he was able to ride with Paul Brown of HP Motorsports in his World Challenge car. Paul gave Rob an E-ticket ride with speeds reaching in the neighborhood of 165 mph. Passing was allowed, and although there was a limit to how fast you could go according to what class you were in, it didn’t appear that anyone was being hassled for exceeding that limit.

If you needed parts or performance components for a Mustang, your VISA card could have easily been given a workout by the large number of vendors at the show. Mustang Parts Specialties, HP Motorsports, Sanja Performance, Daniel Carpenter Reproductions, and others, were there in force peddling the latest in performance components.

Ford displayed a prototype Cobra R and even took it for some hot laps around Charlotte’s tri-oval, while Saleen unveiled a ’99 wide-body convertible wearing BASF Extreme Rainbow paint. Not to be outdone, Steeda and Roush each had their latest Mustang hotties in attendance. One Roush Mustang still had the factory Ford window sticker on it. We would have given them the full $22,000, but they didn’t seem to want to deal. Classic Design Concepts’ ’99 was in attendance and all decked out with the company’s latest additions. Paul Svinicki also had Inform Designs’ ’99 blown droptop for everyone to drool over (Click Here To See The Inform Designs Mustang).

Even if you’re not into the date-coded–hoses Mustang scene, the 35th Mustang Anniversary Celebration had a lot to offer. Where else can you see a ton of cool Mustangs—vintage and late-model—heating up the track and show area?

If you didn’t make it to the 35th, make plans now to attend the 40th. It’s bound to happen, probably at the same location. Every Mustang owner must attend a show of this magnitude at least once in their life. Except next time we would like to see Les Baer or Billy Glidden or Jimmy Keen bring their car to the event to get some open track time. Their cars may not handle very well, but it sure would be cool to see one of them blast down the front straight at over 170 mph. That would rock!

Hope to see you there in five years. It will be well worth the trip.