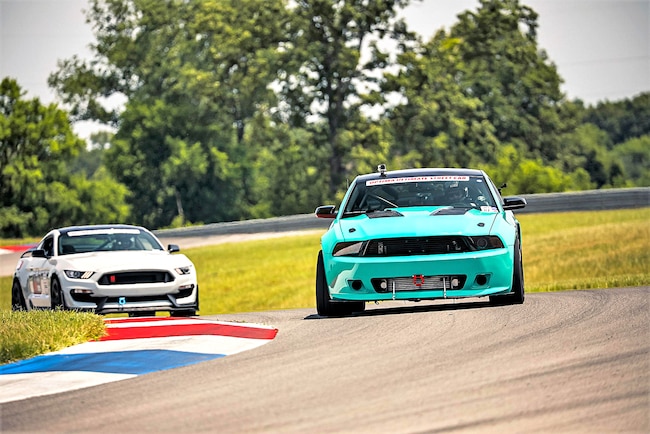 OPTIMA's Search for the Ultimate Street Car, presented by Advance Auto Parts, visits seven tracks around the country before heading out to Las Vegas for the OPTIMA Ultimate Street Car Invitational (OUSCI) after the SEMA Show. However, none of those tracks could be considered the home turf of Chevys more than NCM Motorsports Park in Bowling Green, Kentucky. The "C" stands for Corvette and the factory where they are built is visible from the track. That makes it all the more sweeter when a Ford is able to swoop in and snatch a victory from the bow tie brigade.

Jonathan Blevins got a late start to the season, after narrowly missing out on the GT Class Championship in 2018 and grabbing the GT Class Cup at the OUSCI. His Shelby GT500 was literally in pieces in the weeks leading up to the Bowling Green event and if you looked at his updates on Facebook, you'd wonder if the car would even get put back together this year. Fortunately, Blevins found a way to get it all together and on track for Bowling Green. Blevins finished on the podium in every segment, including class wins in the QA1 Autocross and Lingenfelter Design & Engineering Challenge and was one of only two GT cars to score over 400 points at what could end up being the most-competitive event of the regular season.

In the Recaro GTS Class, Mike Gallagher's Focus RS continues to perform remarkably well against Vipers, Corvettes and GT-Rs, finishing fourth overall and 24 points better than he did at NCM last season. Gallagher narrowly missed the top-ten in points in 2018 by just three points, but two more solid performances like this one should place him well inside that elite group of competitors in 2019.

The GTC class for compact cars had a surprise entry, when Classic Car Liquidators owner, Ken Kelley realized the rollback he was buying was relatively-close to Bowling Green. Rather than miss out on an opportunity to have some fun, Kelley scrounged up a helmet and jumped into his Focus chase vehicle for some fun on the track. While the car didn't set the world on fire, it had no trouble handling the LucasOilRacing.tv Road Rally, which was worth 100 points and helped Kelley finish ahead of a Subaru that couldn't make the transit.

Last season, just two Ford competitors finished inside the top 25 in the Classic Car Liquidators GTV class for pre-1990 cars & trucks, but there are several competitors who are looking to change that for 2019. Three of them had a solid showing at NCM, including a top-ten finish by Jim McIlvaine in his 1969 Cyclone. The strong runs by Henry Crawn's Powerstroke F100 and Robert Britton's fastback Mustang helped move those two cars into the top ten in overall points, joining John McKissack's Fairlane, which now sits sixth overall.

McKissack will return to action at the next stop at Pike's Peak International Raceway in early-July, where he hopes to secure his return invitation to Las Vegas. That track may be a mile high, but the smiles there are all a mile wide, as this series routinely delivers on a volume of track time rarely found these days. At Bowling Green, cars ran a combined total of 880 competitive laps on the QA1 autocross, 910 laps on the Falken Road Course and 950 laps on the PowerStop Speed Stop Challenge and they'll be looking to top all of those marks in Colorado.

Learn more about how you can be a part of this series by heading over to www.DriveOPTIMA.com or watching the TV series that airs every weekend on MAVTV, starting Friday nights at 8PM ET/PT.

When Feras Qartoumy's Corvette decided it wanted the weekend off from track duty, he turned to his trusty Raptor tow vehicle to provide some fun runs on the QA1 Autocross, before heading back to Texas.
Henry Crawn has been getting his 6.0-powered 1968 F100 more dialed in with each event, although he's still searching for a tuner who can deliver a Powerstroke-specific tune for a road course. His enthusiasm for the series was rewarded with the Spectre Performance Spirit of the Event invitation to the 2019 SEMA Show and OUSCI, so we'll see him in Vegas.
There were ten Mustangs in the GT Class in Bowling Green, including three finished in Grabber Orange, but Jonathan Blevins' 2008 GT500 stood out from the pack and took home the class win and Vegas invite.
This series really is welcoming to legitimate street cars, as evidenced by Ken Kelley's Focus, which was a last-minute entry when Ken realized how close he was to this event and was using the Focus to fetch a recent vehicle purchase.
In the battle of the Schoch brothers, which is often a battle within a battle, it was Ron who once again came out on top in his 2016 Mustang, by just seven points over his brother Tim's Mustang. That finish moves Ron into the top five in the season long points chase, just 11 points ahead of his brother.
Saroja Day's third event of the season moves her into third place in the season long points chase, but she'll need to stay after it if she wants to hold that spot.
We don't see Vorshlag's Terry Fair often in the series, but when we do, he makes his presence known. Fair was the fastest GT car on the PowerStop Speed Stop challenge, helping propel him to a fifth place finish in class.
Al Radonski wasn't looking to challenge for the win, he just wanted to get some seat time and have some fun. Mission accomplished.
Kong Chang has run a variety of cars in the series, but this 2017 Shelby seems to be his vehicle of choice for this season. He's in the top ten in points after NCM, so we're likely to see it again at future events as he works toward an invitation to Las Vegas.