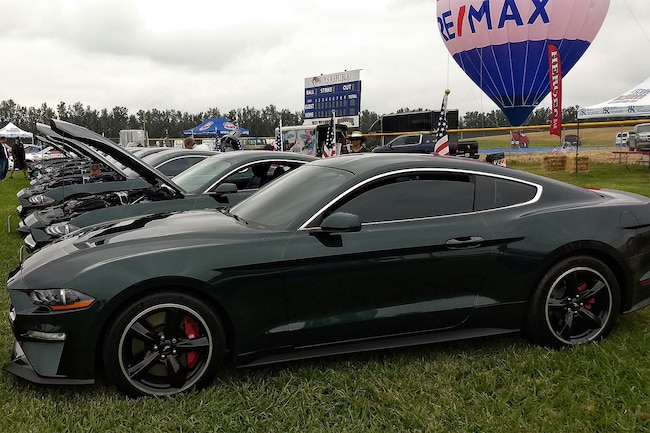 The first Saturday every June, for the past 11 years, car enthusiasts from all over the nation have gathered at the campus of Boys Republic in Chino Hills, California, to celebrate the life and vehicular passions of its most famous alum, The King of Cool, Terrence McQueen. We know him best as Steve McQueen.

This year more than 400 cars, trucks, antique power engines, vintage aircraft, and classic travel trailers gathered on the grounds, seen by more than 10,000 spectators. The weekend's festivities kicked off Thursday evening with a private screening in a local multiplex of 1974's Steve McQueen classic, the Towering Inferno presented by the McQueen Family. The overall theme for this year's show included a number of fire and rescue vehicles on display including a period-correct San Francisco Fire Department 1965 Ford fire chief's car that would have been on duty in 1974.

The school's gymnasium played host to the Friday night reception in advance of the evening's fund-raising dinner. Together with the May road rally and Saturday's car show, the events raised more than $600,000 for the school's general operating fund. The featured guests at Friday's dinner—prepared and served by students of Boys Republic—included the actor's son, Chad McQueen, whose own supercharged 2019 Bullitt Mustang was on display for Saturday's car show.

At the car show, the big winner among the Mustangs, was the 1968 Mustang fastback Bullitt Tribute owned by Jeremy and Marissa Scott that won Best in Class among all the 1967-1968 Bullitt Tributes. It also won the special Frank Panacci Bullitt Award covering all the Bullitt Mustangs from all four groups.

The most interesting of the third-generation Bullitt Mustangs we encountered was the 2008 model displayed by Dwayne Lowe. What makes kit so special? It's already visited each of the 49 continental United States. In 2020 he plans to ship the car to Hawaii to make it a complete set of all 50 states. He won the award for Best in Class 2008/2009 Bullitt Highland Green.

McQueen biographer Matt Stone shared his impressions of this year's events. "The whole Friends of Steve McQueen Car and Motorcycle Show program is great fun for a great cause. Boys Republic is a worthy cause and it's meaningful to know that McQueen himself graduated from there and supported the school the rest of his life. The rally is fun as it gets cars and people out on the road and energizes folks for the upcoming show. The show itself is just a joy with marvelous diversity among the cars, trucks, bikes, and aircraft, including several once owned by the King of Coolness himself."

Save the date to attend next year's event, June 6, 2020. Boys Republic, which serves disadvantaged teens, is located in Chino Hills, just off of the California 71 Freeway. For 2020 entry information, visit the Boys Republic website where you can also order T-shirts and the commemorative posters by automotive fine artist, Nicolas Hunziker. The school's phone number is 909/628-1217 for additional details.

Scan through some of these Mustangs on display at this year's Friends of Steve McQueen Car Show.