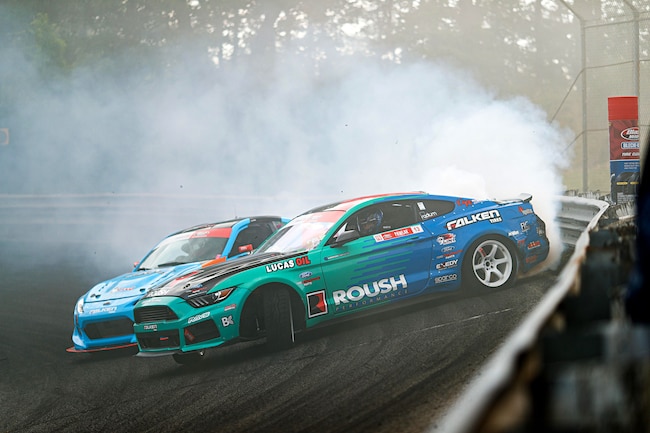 "When I got out of the car I didn't necessarily think it was a perfect run. I felt like I hit all the spots and I was happy with the run. It took about 30 minutes after the run for it to sink in and realize I was finally was able to do what the judges were asking for, it may not have been perfect in my mind but I hit all the spots and threw down a perfect run in their eyes," said Justin Pawlak.

Receiving affirmation of a literal 100 point perfect score finally allowed Pawlak to feel like he has made a permanent mark in the Formula Drift history books. The only other perfect qualifying run occurred 12 years earlier by two-time Formula Drift champion Tanner Foust

Massive angle and being inches from the wall is what earned Justin Pawlak the number 1 qualifying spot.

"Sitting in 13th place coming into Wall, we weren't really expecting to be able to get a huge score," explained Pawlak. "Most of the time, when you're that far back, it seems like the judges will be a bit more reserved with giving out big scores. So, we weren't really expecting anything huge. I was just going to go out and try and run a low to mid 90. Every round this year a 99 has been the number one qualifying spot and if you ran a 98, maybe you qualified 4th. To throw down a run that fulfilled all of the criteria the judges were looking for is just a huge feeling of accomplishment for myself."

But starting practice with a proven combination is the foundation of setting up that perfect qualifying weekend.

Keeping close proximity on the bank can be tricky. Sometimes when drivers make too much contact the vehicle will slingshot around and take out the front of the car as well.

'We showed up to Jersey with a setup we felt confident in, since last year we qualified number one as well," said Pawlak. "However, you can't rely on keeping the car exactly the same; if you ran the exact same setup for three years, you would be left behind.

During practice we were trying to the get the line down. We were having good success with different sections of the track on different runs but not connecting it all together during a single run. I felt like I was running an average of a 90 to 95 run almost every pass and that's all I was trying to do. Then it just all came together. I just hit every single point."

Pawlak is known for his aggressive style, one that earns point with the fans and judges alike but comes at a risk of steering corrections.

"I had to pull about 1/8th of a turn out of my steering wheel because I threw it to full lock. But I think because I threw so much more angle than anybody else there, the judges were okay with that small correction. Driving with aggressive, big angle is a high risk and reward way to drive"

Pawlak was able to get certain sections of the track down during his practice runs and brought it all together when it mattered during qualifying.

Even though Pawlak went out in the Great 8 against Ryan Tuerck (who went on to win the round), he felt that after 14 years running in Formula Drift that he's made his biggest career accomplishment to date. Afterall, a race will always have a winner but not always a perfect qualifying score.

"Honestly, looking back at my entire career, from getting second place in the championship in 2011 to winning multiple events, I feel like this is my biggest accomplishment in drifting. Qualifying is you versus you - there's nobody else. In tandem, there's so many variables that are going on, but in qualifying, the only variable is yourself. So, for me to be able to throw down the best run that I could and to be accepted as a perfect run is amazing. Being listed in the history books amongst an icon like Tanner Foust is huge."

"Qualifying is you versus you - there's nobody else. In tandem, there's so many variables that are going on, but in qualifying, the only variable is yourself," said Pawlak.
Even though Pawlak went out in the Great 8 against Ryan Tuerck (who went on to win the round), he felt that after 14 years running in Formula Drift that he's made his biggest career accomplishment to date. Afterall, a race will always have a winner but not always a perfect qualifying score.