Laps of Honor, Round 2

Playing Walter Mitty on the high-banks of Daytona International Raceway in an EcoBoost-powered 1986 Mustang. 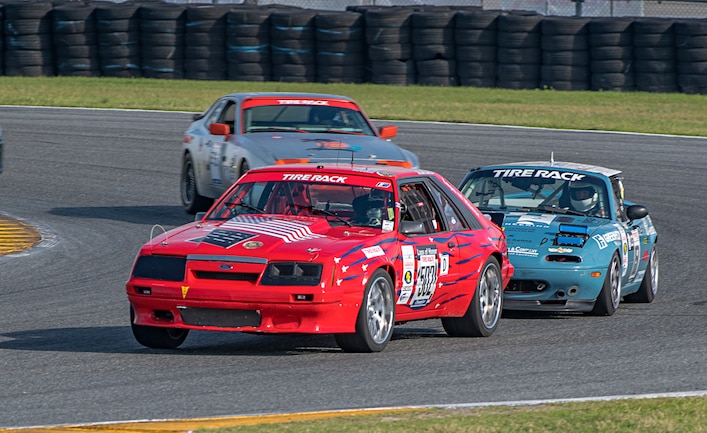 A few months ago you may have read about our adventures in the 24 Hours of LeMons road race at Road Atlanta (http://www.mustangandfords.com/features/1902-laps-of-honor/), witnessing via video the riotous time we had in a pair of Mustang road race cars even under horrible Georgia winter conditions of freezing rain, ice, and snow. It was miserable weather-wise but incredibly fun from an experience stand point and made for great video.

During that December race, we had planned on racing the Rustang—a visually clapped-out but fully capable 1967 Mustang hardtop—as well as a Fox body with a 2.3L EcoBoost swap. Because of the horrid conditions the team from Innovation Performance Technologies in North Carolina decided to park the much nicer (and more expensive to fix after piling it into a concrete wall or tire barrier) Fox and concentrate on the Rustang. Those conditions also forced us to pack up and head home with even worse weather on its way, with a vow to make up for lost time at the next event on the schedule.

That event ended up being the ChampCar race at Daytona International Speedway, and the team couldn’t have kept me away with a fully armed HUMVEE and a belt-fed .50 cal! ChampCar used to be called ChumpCar and was organized by ex-LeMons racers who had a slightly different idea on how to run a race. There are some subtle differences between the series but the thing that ties them together is the attitude of “let’s just have fun racing cars without spending a ton of money.” Like LeMons, there is a price limit on the cars ostensibly to keep it affordable, and the judges in tech will call BS on an obvious cheater of a car and punish it by docking the team laps. Our Fox Mustang cannot hide its ineligibility even to a blind tech inspector, but as was the case in Atlanta we weren’t there to win, just to have fun and turn laps for charity.

Innovation Performance Technologies (innovationperformance.tech) built the cars and is run by Jon Marshall, a former military guy with ties to the military still, and a working relationship with the US Veterans Corps, which builds homes for wounded vets and their families. One of the latest recipients of a home is Anthony Von Canon, who raced with us in Atlanta and came back for round two in Daytona, which was the weekend before the 55 Years of Mustang event in Charlotte, NC.

We decided to race just the Fox car since it didn’t get much action at the previous event and it proved to be a very fun, fast, and capable race car. Most of the car was built by IPT’s Crimson Sanders and with a 2.3L EcoBoost turbo-four and T5 five-speed, it handled Daytona’s 31-degree banked turns with ease, begging the driver to man-up and mat the throttle as long as possible. Crimson set up the dash to work with an iPad for the critical gauges and a speedometer was not one of them. Who needs a speedo in a race car, right?! So, while I don’t know exactly how fast we were going, at 5,000 rpm in Fifth gear with 3.48:1 gears out back, do the math—we’re weren’t just lollygagging around. Our lap times were in the 2:20 range, making us one of the fastest cars in the race. Oh yeah, and it was AMAZING FUN!

One hundred twenty-two cars started the race, and typical of these types of races for what are essentially garbage cars (with exceptions like ours and a few others running in the Exhibition class), about a third of them were out after the first two hours with either mechanical problems or from crashing into each other. The crashing part is pretty common at LeMons and ChampCar races, as the field is split between fast cars with aggressive drivers (not always good drivers though), slow drivers in junk cars that are scared out of their minds with all the intimidating traffic around them, and teams like us that think they’re fast but have no delusions of actually winning anything. As Shelby president Gary Patterson likes to say, we were there to “have some damn fun!”

The ChampCar race was an 11-hour endurance race, starting at 9:00 am on Saturday and going until 11:00 pm, which meant if the car held together we would be racing under the lights at Daytona, a bucket-list goal for all of us. The track was Daytona’s ROVAL that uses 95 percent of the 2.5-mile tri-oval track in addition to the infield road course, the same track layout they run the 24 Hours of Daytona on.

We didn’t get to experience running under the lights, unfortunately—after 10 hours of endurance racing, the transmission refused to come out of Fifth gear, sending Jon back to our garage in the pits. What we thought was a broken shifter turned out to be a broken intermediate shaft inside the T-5 upon disassembly. Either way, there wasn’t enough time to make repairs before the checkered flag flew so we were done for the weekend. We ended up a DNF with four hours left and had to load the car into the trailer while jealously watching the other cars blast around that glorious ROVAL at speed, under the lights. That sucked for sure, but again we were there to have fun and turn as many laps for charity as we could, so like our early departure in Atlanta, the mission was a success.

The good news is that anyone can do this! Our Fox is setup as a legit race car and therefore has a lot of money in it, but the vast majority of competitors in these series have very little money in their cars making it about as affordable as it gets for a real endurance racing series. Plus, 99 percent of the people are there to have fun and a trophy is just gravy on top of a weekend spent driving fast and laughing. And you get to race on legendary tracks that you’ve probably only seen on television. We highly recommend it.

All cars have to go through tech to make sure they meet the rules and have all of the required safety equipment. They weighed the cars too, and our Fox body came it at 2,900 pounds.
Drivers must have up to date safety equipment including a driving suit, current SNELL-legal helmet, shoes, socks, gloves, and a neck restraint like a HANS device or similar.
This is the point where the judges assess lap penalties on the legitimacy of the car’s “low-buck” nature. Naturally, they just waved their heads as if to say “yeah right, get this cheating SOB out of here” before relegating us to an exhibition class. And were were totally fine with that!
Before the start of the race on Saturday morning is the driver’s meeting where ChampCar officials go over the rules, what the various flags mean, and caution drivers to not be “that guy” that is always causing problems.
The trophies were cleverly done. After laying eyes on the First-place trophy, our “let’s just have fun” attitude began to get a little more serious.
A portion of the 122 entries lined up on Daytona’s pit road, prior to following the pace car out for the opening flag.
Anthony Von Canon joined us again for this race. Anthony is a 100-percent disabled veteran who was a recipient of a home built by US Veterans Corps. After he got out of the car he said it was “the second favorite thing I’ve ever done.” He wouldn’t tell us what the first thing was.
The Laps of Honor Mustang runs a 2.3L EcoBoost engine from a late-model Mustang. Crimson Sanders at Innovation is the main guy responsible for building the car.
Early in the day, while the temperature was in the low-90s, we had a bit of an overheating issue that brought us into the garage for a few minutes. With a little more ease of driving, lower afternoon temps, and watching the hood-mounted water temperature gauge to keep it between 220 and 240 degrees, the problem fixed itself. From left to right here is Jon Marshall, former fighter pilot and now a pilot for Southwest Ron Miller, and Mike Ellis of Flyer Defense
The end of our weekend: broken transmission.
We even cajoled photographer MaryBeth Kiczenski to get behind the wheel, outfitted in her new RaceQuip Chevron-1 FRC driving suit. MaryBeth has a lot of experience in drag racing but had never been on a road course, especially not one as intimidating as Daytona with 121 other nutjobs dive-bombing her from every angle and at every available opportunity. Still, she summoned her inner bravery and went out there to do battle and had a great time.
The Laps of Honor team, Daytona Chapter. From left to right is Editor Kinnan, MaryBeth Kiczenski, Jon Marshall, Anthony Von Canon, and Mike Ellis.
This is Daytona’s ROVAL, a combination of the oval and infield road course. Immediately after crossing the start/finish line, you need to start breaking (HARD) for Turn 1, which was the author’s most difficult turn of the weekend. The back straight also has a chicane (called the “bus stop”) to slow cars down before entering the 31-degree-banked Turn 3 of the oval. 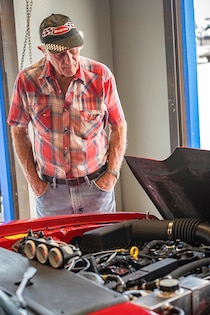 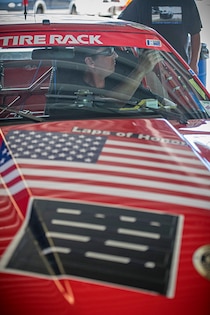