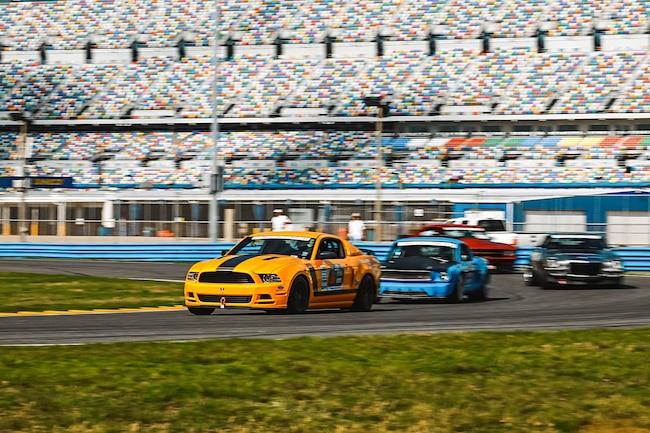 Daytona International Speedway is a special place. While arguments can rage about the merits of other race tracks, there is only one Daytona and the "World Center of Racing" is a fitting title. Opportunities to get on this track are both limited and expensive, even if you hold a competition license in a professional racing series. OPTIMA's Search for the Ultimate Street Car, presented by Advance Auto Parts, is one of those rare opportunities that allow people off the street to take their cars on the same high banked-turns as Pearson, Jarrett, Elliott and Logano.

The series last visited the track in 2014 and knowing it may not return again for some time, competitors from all over the country actually finished their tax returns early and made the haul to the iconic Florida race track in mid-April. The format was slightly different than a typical weekend, in part, to make the financial numbers work. That meant the Falken Tire Road Course Time Trial and PowerStop Brakes Speed Stop Challenge were held on the first day and the first day was a Friday, instead of the typical Saturday. That allowed the series to run the QA1 Autocross on the go-kart track on Saturday, while the Champcar Endurance Series took to the big track.

The field was also larger, which resulted in Ford representation in most of the seven classes that competed, including the newly-formed Outlaw Class, which is not eligible to compete for the OPTIMA Ultimate Street Car Invitational (OUSCI) title, but does still offer an invitation to the SEMA Show and the opportunity to compete for the class cup in Las Vegas.

Ken Kelley of Classic Car Liquidators brought out his recently-acquired Fox-body Mustang, which had done some standing mile runs with him, but was visiting a road course for the very first time. The weekend amounted to a good shakedown run for Kelley and we expect to see him return a few more times this season to make a run at Vegas.

The Classic Car Liquidators GTV Class for pre-1990 cars and trucks saw one it's largest fields in recent history, with 29 vehicles hitting the track, including six Fords. It was a long haul for many of them, but few folks in the field came further than John McKissack, who towed his 1966 Fairlane all the way from San Leandro, California. It was a good thing he towed, because a bad combination of high compression and low octane resulted in a burned piston. McKissack salvaged the weekend, by limping through the QA1 Autocross on day two, which gave him valuable points and a top-20 finish in class.

The Recaro GTS Class has emerged in recent years as the most-competitive class in the series, stacked with both talented drivers and deep with well-prepared cars at every event. Mike Gallagher's 2016 Focus RS is literally the only Ford signed up to run this season and it's not surprising to see why. The minimum weight is 3,200 pounds and his RS routinely squares off with Corvettes, Vipers, Lamborghinis and Porsches. Still Gallagher is a seasoned veteran who has built his car to be competitive and it is exactly that, finishing fifth out of 16 entries and well within striking distance of the podium.

The biggest surprise of the weekend may have come in the Optima GT class for late-model musclecars. It should be no surprise that Cliff Elliott's 2016 GT came out on top, but it did so in very convincing fashion, with a 479-point performance and a 29-point gap over second place. As a frame of reference, last season's class champion never scored more than 459 at his best event and you'd have to go back to 2016 to find anyone in the GT class who posted a higher score than Elliott. While it was a large field and there were several heavy hitters within it, there were many big names that were notably absent, which definitely had an impact on the points available to all competitors.

Almost all of the series regulars who also ran at the first event of the year in Las Vegas saw significantly higher point totals at Daytona. That could have an impact on the season-long points chase, as points are often harder to come by as the season moves on. Just looking at the points leaders from last season (all of whom are competing this season), we saw 21 of the top competitors in five different classes, who weren't at Daytona, which created a tremendous opportunity for those who were. In fact, Steve Kepler's GT-R set a series record with his 498-point performance. If Elliott can follow up his performance at Daytona with two more solid outings this season, that will place him well above 1,300 points for the season and in serious contention for the championship, which Eric Sheely won last year with 1,345 points.

The series now goes on a brief hiatus before a sold-out field heads to NCM Motorsports Park on June 1- 2, and we can guarantee points will not be as easy to come by at that track. If you're not able to make that event in person, you can catch the action every weekend on MAVTV (Channel 214 on DIRECTV and 1105 on AT&T Uverse).

Frank Watson couldn't have picked a better venue than the high banks of Daytona for the debut of his 1968 Ford F100 in the OPTIMA series.
In the battle within the battle, Henry Crawn's diesel-powered 1968 F100 emerged as the top Ford pickup of the weekend, finishing just inside the top-20 in the Classic Car Liquidators GTV class. He also picked up a free set of tie downs from Mac's Tie Downs for having the worst-looking tie downs in the pits.
John McKissack came a long way from San Leandro, California to have his weekend shortened by engine issues. He did manage to salvage an autocross run, netting him the FireAde Great Save of the Weekend award, which included a free fire extinguisher
In the battle of the Mustang-driving Schoch brothers, it was Ron, whose 2016 GT edged out his brother, Tim's 2011 Mustang by four points for fifth place in the Optima GT class.
Nasario Birrueta Jr. is another West Coast competitor, who saw Daytona on the schedule and knew he had to be there. Having run in the first two events of the season, his 2013 Boss 302 now sits in third place in the Optima GT Class points standings.
Saroja Day is one of only a handful of competitors, who has committed to run all seven events in her 2010 Mustang GT. After the first two rounds, she sits in fourth place in her class.
Robert Britton's gorgeous 1965 Fastback was the top Ford in the Classic Car Liquidators GTV class.
Cars at Daytona see speeds that are unrivaled anywhere else in the series. Vintage cars like Ed Hudson's 1964 Falcon are strongly advised to tape down their chrome window trim and have two latches on their hood to keep everything in place at speed.
While there is a strong emphasis on fun in the series, the drivers meeting before the Falken Tire Road Course time trial is a serious affair. No one at the meeting is even allowed to hold a cell phone, let alone look at one, as the information being shared is of paramount importance.
Anyone who doesn't get goosebumps while sitting on the grid at Daytona needs to have their pulse checked.