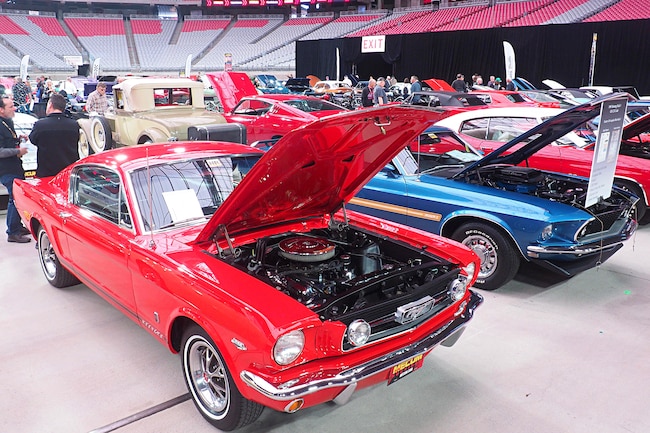 On March 14-17, 2019, Mecum Auctions ventured to metropolitan Phoenix for its first Arizona auction. Considering all the hubbub in Scottsdale in January, some may be wondering, “What took ya so long?” According to Mecum CEO Dave Magers, it’s all about geography, the proper venue being available, and weather. “Because we’re so big at what we do, when we go to an area, we draw a lot of inventory. We typically cannot go back to [a region] within 3 months of one side or the other. So that limits us that if we’re in Las Vegas [in November], we can’t come to Glendale for at least 3-4 months.” Since State Farm is “the oldest and biggest sponsor of Mecum Auctions,” and since the insurance giant recently acquired the naming rights to the stadium, an opportunity arose.

For an event that was originally scheduled for two days and 600 cars, Phoenix-Glendale was a rousing success. Mecum eventually expanded to three, then four days and 1,450 vehicles. When the dust settled, sales totals reached $39 million, which was a Mecum record for an inaugural event. Two Mustangs made the Top 10: At number six, a 1967 fastback built by Classic Recreations (Lot S144); and a 1969 Boss 429 (Lot S80.1) at number seven. Let’s take a look at those and several other steeds from Dearborn:

Compare it with the 1969 Mach I next to it. Painted in the ever-popular Acapulco Blue, equipped with the R-code 428 Cobra Jet with Shaker, and paired to a C6 automatic with 3.25 Traction-Lok, this was perhaps the quintessential hot Mustang roaming the streets in 1969. Is the $50,600 it sold for a better value, car for car?

1966 Mustang GT Convertible
Perhaps you like your K-codes without a top? This ragtop is likely one of the most unique 1966s built, as not only does it have the 289 Hi-Po/C4 automatic combo but also a bench seat. Other features include wood-rimmed steering wheel and Rally Pac. It too sold for $55,000—for the same price, do you prefer sun or fastback style?

1966 Shelby GT350H
The 1966 Shelby was watered down from the previous year’s but, in the collector car market, it still commands a hefty price. With only 244 Hertz cars painted in something other than black and gold, this one (originally put to duty in St. Louis) was one of 60 painted Candyapple Red. Updated with four-speed and Shelby 10-spoke aluminum wheels, this GT350H sold for $121,000.

1967 Mustang 2+2
1968 Shelby GT500KR Convertible
Thanks to Hollywood, you too can have a fastback and custom-build it for a greater value than stock. On the other hand, aren’t these cool in their own right? Professionally built by Classic Recreations, it featured a 427/750 crate engine with FAST fuel injection, ProCharger intercooled F1R supercharger, nitrous, and more. For $225,500, you too can play with the big boys.

Contrast that with an authentic Shelby, a GT500KR convertible. These are near the top of the pecking order, and this Wimbledon White/Saddle/blue stripe combo was unique. The Cobra Jet was paired with a C6 automatic with 3.50 Traction-Lok, meaning it doesn’t have power-robbing AC. The mag wheel covers are a love/hate affair for some. The new owner paid $148,500 for it.

1968 Shelby GT500KR Convertible
Another KR ragtop at Mecum, this one featured a Highland Green/Black/white stripe combo. The main distinction between the two convertibles is this one featured air conditioning, so it had 3.00 rear gears tied to the C6 automatic. It was not touted as a “show winner,” so was it at a level down from the one above? For $132,000, perhaps it was, but auctions can be funny.

1968 Mustang California Special
This regional Mustang special was unrestored, ripe for someone who appreciates that stuff or someone else to bring it up to another level. Painted in ever-popular Lime Gold (574 built) with Ivy Gold interior and equipped with the J-code 302 with 230 horses with C4 automatic (637 built), this California Special also had air conditioning, AM radio, tinted glass, and power front discs. The new owner paid $18,700.

1968 Mustang GT 2+2
Some people prefer 1967s, others prefer 1968s. Here’s one that hasn’t been repainted dark green, so does that make it special these days? Nonetheless, this restored fastback was more sporty than sports thanks to the J-code 302 4bbl. but the four-speed certainly helped for more spirited driving. Power steering and power disc brakes were the only other options listed by the seller, who walked away $47,850 richer.

1969 Mustang Boss 429
We’ll spare you on what’s already been said many times about Boss 429s, but it’s tough not to be impressed with them. KK No. 1886 had the 820-T engine, which was the mid-year update, but it seems the Mustang hobby hasn’t attributed a difference in value. Painted Candyapple Red with black interior, it was originally sold in West Virgina for around $5,000, significantly less than the $209,000 paid by the new owner.

1969 Mustang Boss 302
There’s a lot of similarity between the Boss above and this 1969 Boss 302: both were built to homologate (although for different races); both featured styling distinct from regular Mustangs (if not each other); and both only were available for two years. This Wimbledon White/blue example came with 3.91 gears with Sport Slats among other options. It took $62,700 to take home this road racer.

1969 Mustang Mach I
This Indian Fire Mach I features a small-block 351 4bbl Windsor paired to a Tremec 5-speed upgrade. Lots of Mach Is were built with 351s, so maybe purists shouldn’t cringe and instead celebrate the idea that this one will be driven? Other features include 15-inch Magnum 500s, “dealer-installed” Sport Slats, and spoilers front and rear. It could have been yours for $35,000.

1970 Mustang Mach I
Some prefer the ’69, others prefer this, which originally was a H-code 351 2bbl with FMX automatic. A 4bbl was swapped in and a Shaker added because we all like more power and candy, although the 2.80 rear is somewhat odd. Front and rear spoilers, color-keyed racing mirrors, and 14x17 Magnums round it off. How did it compare to the above ’69? For $35,200, which would you prefer for the same money?

1970 Mustang Mach I
Trimmed in a Medium Gold/Ginger combo but equipped with an R-code 428 Cobra Jet and C6 automatic, the Mach ain’t so sedate with Drag Pack 4.30 gears. Included were the original title, sales contract, window sticker, and build sheet. Seller claimed 36,000 miles, with the rebuilt engine having less than that. A very pretty and fast Mustang cost only $57,750 to exchange hands.

2014 Shelby GT500 Super Snake Convertible
Isn’t technology great? This GT500 was a Super Snake, so it started out with 662 horsepower and then was awoken with a Whipple supercharger for a rousing 850 horses. Ford Performance suspension and Wilwood brake upgrades, 20-inch forged wheels, and a short-throw six-speed hooked up to a 3.73 differential all try their darndest to maintain vehicle control when the driver won’t. The 2,305-mile Shelby sold for $74,250.